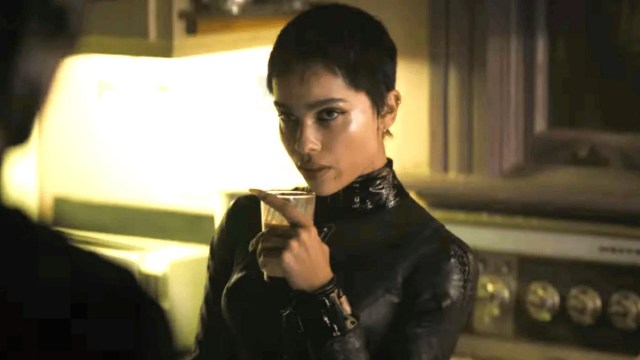 Matt Reeves’ The Batman redefined Catwoman thanks to Zoë Kravitz’s exceptional performance, but the actress herself thinks the entire experience was bizarre from a production standpoint.

Superhero movies feature a lot of anachronistic elements that require an effort of imagination on the viewer’s part to suspend their disbelief and make them immersed in the world, but the producers also do everything in their power to make everything as seamless as humanly possible, until reaching a point where the stuff that’s happening on the screen could be every day’s bread and butter.

But imagine what the actors must feel like going into the role. For Zoë Kravitz, that process involved waking up at 6 am and getting ready to be covered up in lube and latex. As she explained it during an extensive photoshoot for GQ:

“I already think my job is very bizarre. But there’s something even weirder about someone lubing you up and covering you in latex at six in the morning when the whole world is kind of stopped.”

Kravitz has no regrets about appearing in something as successful and commercially huge as The Batman, though, saying that this was the first time she felt being “in something undeniable.”

That certainly gives you perspective over a lot of superhero projects. Imagine what the actors must feel like getting into those costumes and pretending to fight supervillains for a villain, mostly in front of a green screen that turns it into an even more make-believe exercise.

Zoë Kravitz is soon returning for another outing as Selina Kyle in Matt Reeves’ Batman sequel. Whether she will reignite her passionate romance with Robert Pattinson’s Caped Crusader, though, is up for speculation at this point.