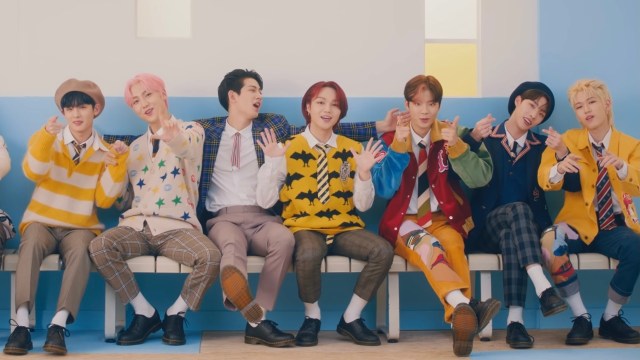 As K-pop continues its meteoric rise in the international music scene, more and more groups continue to emerge, so as to enjoy the fame and success of their predecessors. 2022 has become a phenomenal year for many K-pop stars, and has even featured the comebacks of some of the prominent boy groups Seventeen, Ateez, and the megastars, BTS.

As the listening queue keeps growing longer, here are 10 boy groups that have debuted in the first half of 2022 and are rising through the ranks as ones to watch in the K-pop scene. Be sure to check out the girl groups that have also debuted this year.

Younite is a nine-member boy group that debuted earlier this year on April 20, and under the record label, Brand New Music. The nine members, Eunho, Steve, Hyunseung, Eunsang, Hyungseok, Woono, Dey, Kyungmun, and Sion make up the team and have already shown major signs of star power. Eunho and Eunsang are the leaders of the group with the former being the only member with a solo music career. The group had their official debut with their first EP titled Youni-Birth and released their sophomore EP Youni-Q three months later. Youni-Birth peaked at the eighth spot on South Korea’s Gaon Album Chart, while Youni-Q peaked at the ninth position.

Trendz is a boy group that consists of seven members: Eunil, ra.L, Havit, Yoonwoo, Leon, Hankook, and Yechan. Hankook and Havit share the top spot as co-leaders of the group. Trendz made their official debut on Jan. 5 under Interpark Music Plus with the EP Blue Set Chapter 1: Tracks. The EP peaked at the 30th spot on the Gaon Album charts, while their second EP, Blue Set Chapter 2: Choice peaked at number 25.

TAN (To All Nations) is another seven-member group that debuted on March 10 under Think Entertainment. The members: Jooan, Jaejun, Changsun, Sunghyuk, Taehoon, Jiseong, and Hyunyeop- were initially part of the MBC Idol survival show, Extreme Debut: Wild Idol. Out of a lineup of 45 contestants, the seven members made it to the finals and were able to debut as a boy group. TAN released their first EP 1TAN which peaked at the 24th spot on the Gaon Album Chart, and the lead single “DU DU DU” reached the 59th spot on the Gaon Digital Charts. The boy group released the first part of their sophomore EP 2TAN on June 21, and the second part on July 26.

TNX (The New Six) is a boy group consisting of six members that made their debut on May 17 under the entertainment agency, P Nation. The members: Taehun, Hyunsoo, Sungjun, Kyungjun, Hwi, and Junhyeok participated in the survival program, Loud, in a joint collaboration between P Nation and JYP Entertainment. The six members made the final lineup and debuted with the EP Way Up which peaked at the 9th position on the Gaon Album Charts.

Tempest is a seven-member boy group that made its debut on March 2 under Yuehua Entertainment. The members: Eunchan, Lew, Hanbin, Hwarang, Hyungseop, Taerae, and Hyuk had participated in various survival shows such as MNET’s I-LAND and Produce X 101 Season 2 before they made their official debut. Tempest emerged on the music scene with the EP It’s Me, reaching the penultimate spot on the Gaon Album Charts.

Superkind is a boy group that is set to feature a whopping 10 members, making them one of the K-pop groups with the most members. They debuted on June 20 under Deep Studio Entertainment. What makes this group truly unique however is that Superkind consists of both human members, and an artificially intelligent member. Currently, the lineup consists of four humans: Daemon, Eugene, Geon, and SiO, and a virtual idol member named SAEJiN. The group will be welcoming more human and virtual members in the future. Superkind debuted with the single “PlaySuperkind: Apply for Beta Test [Watch Out].” The group has been met with a mixed reception by fans over the use of AI, with some fans praising the innovative approach, and others stating that many humans will be left out of the K-pop scene moving forward.

Formed by FirstOne Entertainment, Nine.i is another 10-member boy group that made its debut on March 30 with the EP New World. The members are: Eden, Winnie, Seowon, Vari, Jewon, Minjun, Vahn, Taehun, Joohyoung, and Jiho. Before the group was formed, some members had participated in a few survival shows such as MNET’s Produce X 101, and MBC’s Wild Idol.

JWiiver (formerly known as JTG Boys) is a seven-member boy group that officially debuted on Feb. 17 with the EP JTrap. The group was formed by Starweave Entertainment and consists of the members: Roshin, Rihan, Gabin K, Roats, Shita, Ryujei, and Jukang. The group has three international members from Japan, China, and Macau while the others hail from South Korea. Before the formation of the group, six members were contestants on several different survival shows such as the popular Produce X 101, World Klass, and Show Me the Money. JTrap peaked at the 81st spot on the Gaon Album Chart.

ATBO (At the Beginning of Originality) is a seven-member group that debuted under IST Entertainment on July 27. The group made its official debut with the EP, The Beginning: 開花. The group was formed through a survival program, The Origin- A, B, or What? where the seven members: Oh Junseok, Ryu Junmin, Bae Hyunjun, Jeong Seonghwan, Seok Rakwon, Won Bin, and Kim Yeonkyu made the final lineup. The Origin- A, B, or What? peaked at the 5th spot on the Gaon Album chart and 3rd on Hanteo, which tracks hourly album sales.

Blank2y debuted under Keystone Entertainment on May 24 with the EP K2Y 1: Confidence, and the lead track “Thumbs Up”. The group consists of nine members: DK, Donghyuk, Louis, Siwoo, U, Mikey, Sungjun, So Dam, and Youngbin, two of which are from China and Japan respectively. Their debut EP peaked at the 6th position on the Gaon Album Chart and hit the 4th spot on Hanteo Album Sales.