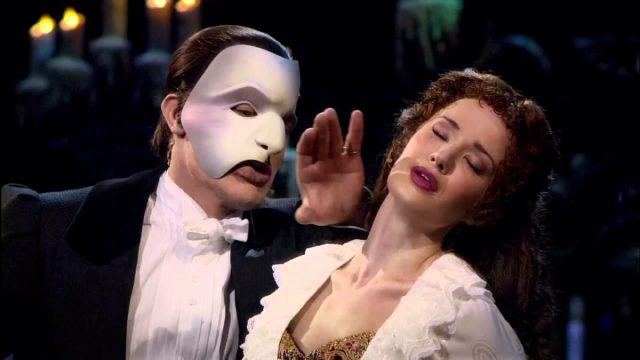 It’s over now, the music of the night.

After what will be 35 years, The Phantom of the Opera is finally set to close on Broadway in 2023, bringing an end to a record-breaking run for the legendary gothic musical from Andrew Lloyd Webber and Cameron Mackintosh. Since opening in 1988, the sumptuous, romantic reimagining of Gaston LeRoux’s 1909 novel of the same name has consistently spellbound audiences thanks to the talents of each performer to don the eponymous Phantom’s famed half-mask and kidnap his much-persecuted paramour, Christine.

So with the news that the longest-running show in Broadway history is about to conclude, let’s take a look back at the finest Phantoms to tread the boards over the past three and a half decades, as well as run through the most notable incarnations of the character to appear in other screen adaptations of the timeless tale. Whether he’s on stage or not, the Phantom of the Opera will always be there, inside our minds.

The originator of the role of the Phantom — known in the original book as Erik — in the musical was Michael Crawford, who starred opposite Lloyd Webber’s then-wife Sarah Brightman as Christine. It was the impeccable chemistry of the pair and Crawford’s seductive singing voice that ensures this duo remain the definitive leads of the production for many a phan.

For those who fell in love with the Phantom sometime around the show’s 25th anniversary a decade ago, however, Ramin Karimloo is likely to be their favorite portrayal of the terrifying yet tragic anti-hero. Apart from his astonishing vocal talent, Karimloo offers one of the most layered performances of any stage Phantom, perfectly capturing his crippling loneliness and unpredictable mood swings.

When it came to casting the movie adaptation of the musical in 2004, director Joel Schumacher made the surprising choice to hire Gerard Butler, who had never had formal singing experience prior to landing the role (original pick Hugh Jackman was unable to commit due to scheduling conflicts with Van Helsing). Nevertheless, Butler is exceptional at depicting both the Phantom’s rage and his strange allure.

Norm Lewis is a bonafide Broadway icon, thanks to playing such celebrated roles as Sweeney Todd and Les Miserables‘ Javert across his illustrious career, but he made history when he joined the cast of Phantom of the Opera in 2014, becoming the first African-American actor to occupy the part. He starred opposite fan-favorite Christine Sierra Boggess, who previously appeared with Ramin Karimloo.

In the wake of the show’s successful 25th anniversary celebrations, Lloyd Webber went ahead and made the phandom’s dreams come true by staging a sequel, Love Never Dies, which continued the story of Phantom and Christine. Unfortunately, it turned out to be a huge flop, never making it to Broadway. Ben Lewis’ performance in the Australian production, however, offers a superlative portrayal of the character, which more than makes up for some of the sequel’s shortcomings.

Thanks to the musical transforming the Phantom into a romantic lead, it’s often forgotten that Gaston LeRoux’s novel portrays him very much as a monstrous villain. So that’s how he’s depicted in the seminal silent film from 1925, which is famous for the horrific facial make-up worn by star Lon Chaney. Urban legend has it that initial audiences were so horror-struck by the sight they fainted clean away.

Just shy of 20 years after their previous effort, Universal once again brought the Phantom to the screen to fit him into their shared horror universe that had developed since the early ’30s. Casablanca alum Claude Rains took the lead this time. While nowhere near as atmospheric as the ’25 film, this was the first adaptation to be shot in brilliant technicolor. It was also the only Universal horror flick to win an Oscar — two, in fact, for Art Direction and Cinematography.

Phantom of the Paradise is maybe the most original adaptation of the Phantom story there’s been to date. A contemporary spin that switches the aesthetic from opera to rock, this Brian DePalma-directed retelling follows Paul Williams as a brilliant songwriter who is cheated out of the rights for his life’s work and, after being disfigured in an accident and gaining metal teeth, sets about getting revenge on those who wronged him.

Perhaps inspired by the hit musical, 1989’s Phantom of the Opera film took the story in an entirely opposite direction. And with Nightmare on Elm Street star Robert Englund behind the prosthetics, you can probably guess what that is. Yes, this version relocated the action to modern-day Manhattan and essentially took a schlocky slasher movie approach to the material. Unsurprisingly, it was widely panned.

Another wild adaptation of the tale came from Italian director and giallo maestro Dario Argento. In this 1998 movie, the Phantom isn’t actually disfigured, with Julian Sands looking more like a Legolas from Lord of the Rings cosplayer. The story also takes some huge liberties with the source material, depicting the Phantom being raised by rats like some kind of sewer Mowgli and communicating telepathically with Christine (Argento’s daughter, Asia Argento).