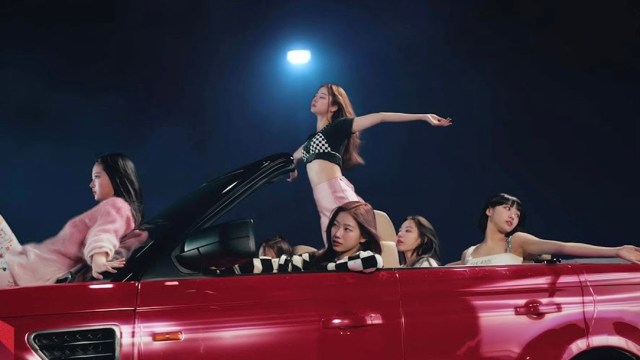 Le Sserafim is fast on the rise as a fourth generation K-pop girl group. The group initially debuted on May 2 with six members:  Chaewon, Sakura, Eunchae, Kazuha, Yunjin, and Garam, but two months after, Garam’s contract was abruptly terminated and she was evicted from the group. The name “Le Sserafim” is an anagram of the phrase “I’m fearless,” referencing the group’s confidence and girl power. The group was formed and is managed by a collaborative effort between Source Music and Hybe Corporation.

Their debut EP Fearless and its lead single of the same name have been met with a positive reception from fans, stamping Le Sserafim as one of the most successful K-pop girl groups to debut in 2022. Fearless reached the number two spot on the Circle Album chart and the lead single peaked at the ninth spot on the Circle Digital chart. The music video for “Fearless” has been viewed over 100 million times on YouTube, just three months after its release.

So, here are the five talented members of Le Sserafim and their roles.

Chaewon was born on Aug. 1 in 2000 and is 22 years old. She stands at 163cm (five feet and four inches) tall. She is a singer-songwriter and the leader of the group. Born to the acclaimed theatre actress Lee Ran Hee, Chaewon followed a similar path, graduating from Hanlim Multi Art School in 2019. She was a participant in the idol reality competition Produce 48, as well as a trainee under Woolim Entertainment. After the final lineup of the show, Chaewon debuted as a member of the Korean-Chinese girl group Iz*One — one of the most populous K-pop groups — on Oct. 29 in 2018. Although successful, the group was short lived,  and by 2021, Iz*One had officially disbanded, leading Chaewon to sign an exclusive contract with Source Music the next year.

Sakura was born on March 19 in 1998. The 24 year old singer-songwriter, model, and actress hails from Japan and stands at 163cm (five feet four and inches) tall. Sakura has been a successful idol in the past, and was a member of the Japanese idol groups HKT48 and AKB48 between 2011 until 2017. In 2018, she participated in the MNet survival show Produce 48 and became a member of the resulting group Iz*One. Following the group’s disbandment in 2021, Sakura also departed from HKT48 and signed an exclusive contract with Source Music to debut as a member of Le Sserafim.

Kazuha was born on Aug. 9 in 2003 and is 19 years old. She stands at 170cm (five feet and seven inches) tall. Like Sakura, Kazuha is also a Japanese native. She is a highly trained professional ballerina, and has attended ballet schools in Japan and the Netherlands. Her skills come in handy, as she is another main dancer in the group, as well as Le Sserafim’s main rapper. In 2018, she won the silver medal at the Asian Grand Prix Competition, Junior Division. Kazuha was a trainee for three months before the group’s debut.

Yunjin was born on Oct. 8 in 2001 and is 20 years old. She is the tallest member of Le Sserafim, standing at 172cm (five feet and eight inches) tall. She is a Korean-American singer-songwriter and producer. In 2018, she participated as a trainee under Pledis Entertainment in the show Produce 48 but was eliminated in the 11th episode. In 2019, she began attending Hanlim Multi Art School but dropped out before graduating. Yunjin signed an exclusive contract with Source Music in 2021 and debuted with the group in 2022.

Eunchae is a singer who was born on Nov. 10 in 2006 and is the “Maknae“ of Le Sserafim as she is just 15 years old. She stands at 169cm (five feet and seven inches) tall and is an expert choreographer, mastering the group’s dances in a very short amount of time. She was a student of Def Dance Skool for two years before being recruited by Source Music in 2021. In the past, she had auditioned at the highly sought after entertainment agencies JYP Entertainment and Pledis Entertainment but was unsuccessful at the auditions. Eunchae is currently a student at Seoul Moonyoung Girl’s High School. She trained for 16 months before making her debut as a member of Le Sserafim.