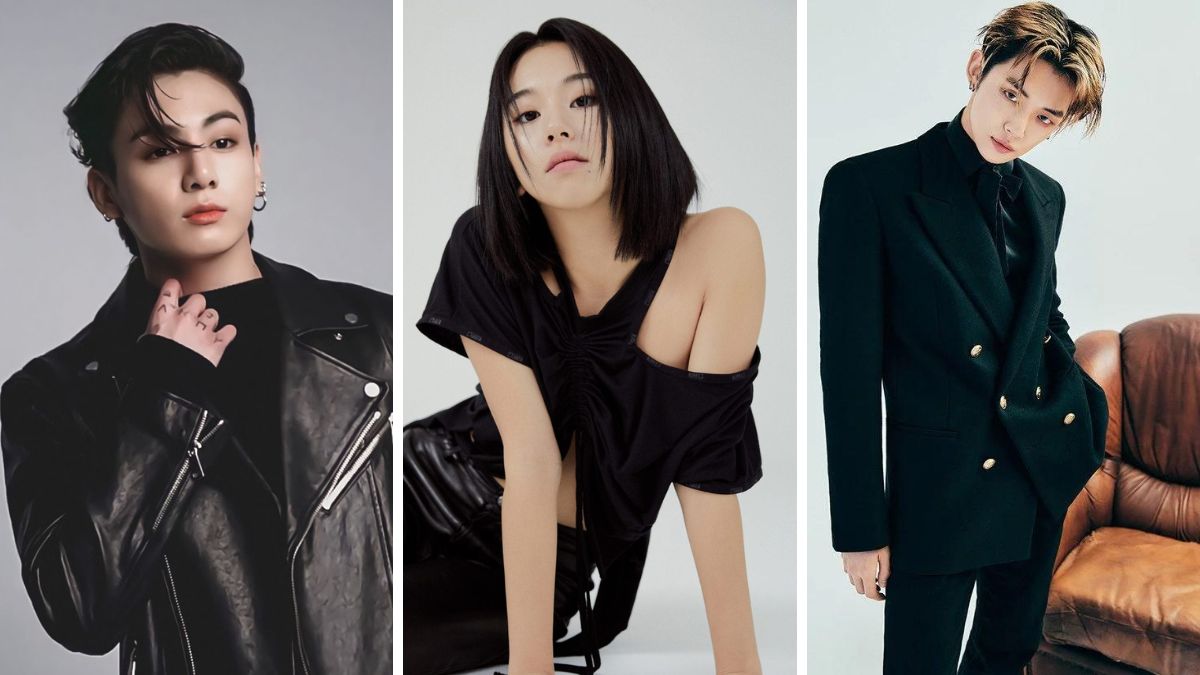 Photos via BIGHIT and SM Entertainment

The vast and profitable world of K-pop is known for its beloved bundle albums heavy with merch. As a gift to fans, these bundles perfectly entice every passionate devotee to buy their favorite group’s physical album, which includes the ideal amount of gifts within one piece of merchandise. Although they no longer count for the Billboard charts, many groups like BTS and TXT still release the albums bundled with merch as a way to gift fans who go out of their way to physically purchase their music. Recently, western artists have also taken to including merch in their own albums, including Taylor Swift, Lady Gaga, and Ariana Grande.

While it may differ from artist to artist, merch-bundled albums may include a panoply of goodies. From posters to photo albums, the possibilities of gifts are endless when it comes to merchandise. One of the most popular items are photo cards. Typically including a picture of a member printed on thick photographic paper, these photocards sell to collectors for a pretty penny. As each album usually includes one specific photocard by a member, it becomes sort of a Pokemon-like trade to “catch them all.” The impressive resale values fueled by avid and passionate fans are absolutely world-shattering, and here are the K-pop artists whose photocards are a bit more profitable than the rest.

The tenth most expensive photocard belongs to none other than BTS’ V. The card, which sold for a whopping $839.99 was included in the package from the Muster fan event, showing a picture of the singer sporting red hair. The fan event occurred in 2014, and it was the very first BTS fan club meeting to exist and take place in Olympic Hall in Seoul. The photocard’s value increased with time, but most of its worth derives from its rarity. As a fan-only event, these cards are extremely valuable, with only a few existing copies. This item was also the most expensive photocard sold in 2020.

TXT’s popularity has skyrocketed since their debut back in 2019, as the only group under BigHit Entertainment after BTS. As one of the many fourth-generation groups whose fame has grown larger than ever, TXT’s photocards have massive resale value. Yeonjun‘s photocard from their Blue Hour album sold for $850 on eBay. The rapper and oldest member of TXT is seen in a cute pose with some stickers on his face. The photocard also has his signature on the back, alongside the quote “When we found each other,” in his handwriting.

NCT certainly knows the trick to making their photocards’ values increase exponentially. The NCT 2020 album included special yearbook photocards, which were not only limited but were different photo cards from the normal album. Each member had only 500 photocards printed, making them an extremely rare item, thus increasing their value due to the scarcity of the photocards. Taeyeon’s own version of the card was listed and sold on eBay for $870.77. The singer appears in a neat suit jacket with his hair pushed back, and the card itself has holographic designs all around it, making it far more visually appealing than the normal version.

At this point, everyone should know that if it has BTS’ touch, it will be expensive. The maknae line, which includes Jimin, V, and Jungkook, appears to have the most profitable photocards on the market. The price increases if the items are a part of limited content DVDs, as is the case for BTS Diary’s first season’s greetings from 2014. This Jimin photocard, where the singer is wearing accessories, including a ring saying “NO,” as a reference to one of the songs from their debut album, is a particularly rare item considering there are only 600 copies circulating. The card was sold for $939, and from the same album, BTS’ V and Jungkook’s photocards snagged similar profits from resellers.

As one of the most coveted and sought-after collectibles for BTS fans, the DVD Memories of 2017 includes some of the most expensive photocards in K-pop. While all the cards were valuable as a whole as well as separately, the numbers varied from member to member. Jungkook’s photocard was sold for a whopping $950, making it the most expensive one from the bunch. The numbers were a bit lower depending on the members, with the maknae line selling at the highest amounts per photocard – Jimin’s being worth $700 and V’s $750.

The most expensive photocards on the market belong to BTS’ main vocalist, Jungkook. The seven-member group’s latest music release was the anthology album Proof, which comprised BTS’ biggest hits throughout the course of their decade-long career. Included in the bundle, Jungkook’s exclusive, limited lucky draw has been one of the most profitable photocards to date, selling on eBay for $999. The singer appears in a black and white striped shirt, in a pout-kiss pose, while sporting his beloved lip piercing, which had many fans enthralled by the photocard and willing to pay the exorbitant amount.

Every year, JYP holds annual events with special surprises, exclusive content, and unique performances that only happen rarely. During one of these events, in 2018, a limited set of TWICE photo cards was released during the Superstar JYP Nation event. The set included items from each member, but the catch was: there are only ten sets of photocards in the world. The rarity of these cards has created an exponential increase in value, with prices ranging from $1,200 up to $1,324, depending on the member. The most expensive card belongs to the main rapper, Chaeyoung.

The third most expensive photocard to have ever been sold belongs to the oldest member in the maknae line of BTS. Jimin’s one-earring wonder photocard was part of a limited lucky draw at the special Butterful Night event. The items at this party are some of the most expensive collectibles in K-pop, and the photocards are naturally selling for immensely high amounts. As there were only 420 attendees at this exclusive event, the items have an added increase in value, making this photocard worth $1,432.

If you thought Jimin’s photocard was expensive, take a look at the youngest member of the group. Titled “Blue Haired FLO selfie,” this photocard is a high-demand rare item from a lucky draw held by FLO. This particular sale was announced on Twitter, and fans were immediately jumping at the opportunity of having the photocard of the golden boy from BTS. Many fans were willing to pay exorbitant amounts due to the singer sporting blue hair – a rare sight. The bidding took place on Twitter, where the seller ended up fetching $2,673 for the card.

The highest-priced K-pop photocard to have ever been sold belongs — unsurprisingly — to Jungkook. The vocalist from BTS holds three out of the ten most expensive photocards to have ever been sold, with the most expensive one belonging to the Butterful Night event. The scarcity of attendees and the rarity of this photocard — as well as the specific member — have increased the value of this photocard by a huge amount. The item was sold for $3,213 after 120 bids. Although it may appear like an insane cost for a picture, ultimately, fans are willing to pay to get these collectibles of their favorite artists.

With the incredibly high dollar amounts in each of the entries on the list, you may be wondering why anyone would go through such lengths to purchase a piece of paper. Collectors attach themselves to fandoms for profit or often due to being fans themselves. From CDs to magazines and books, all in all, loyalty manifests in various ways.