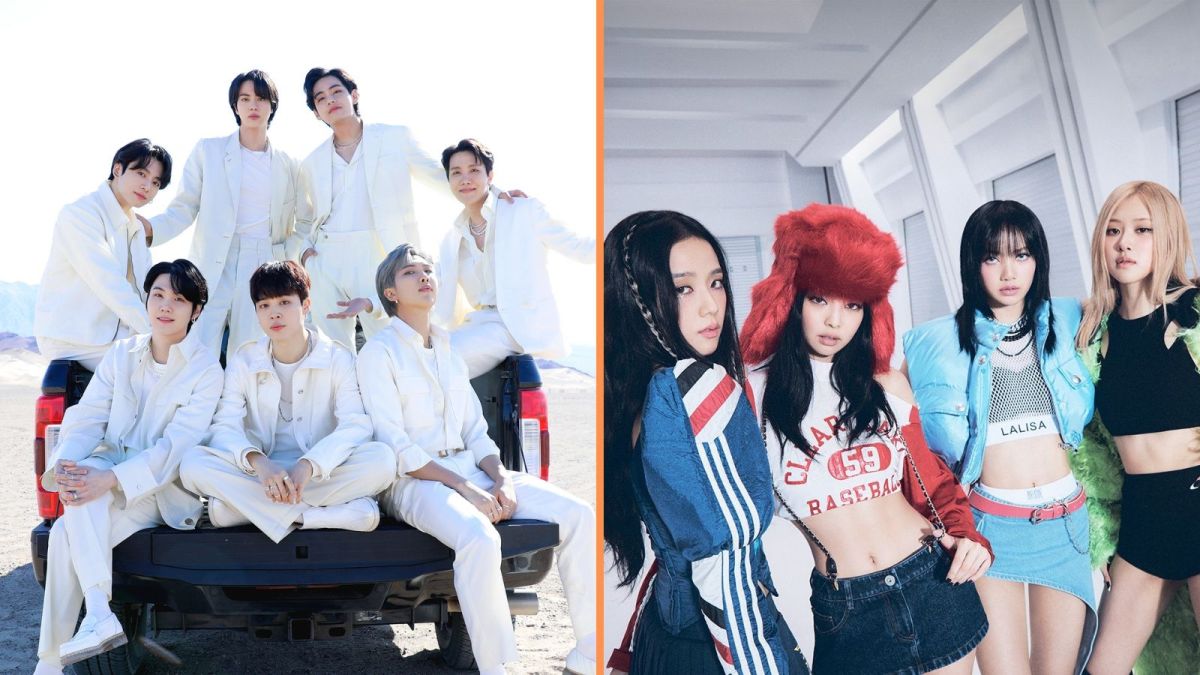 Although mostly focused on pop music, today K-pop can encompass a wide variety of sounds. This particular genre has increased in popularity in recent years, mostly thanks to BTS’ breakthrough into international markets. While some K-pop acts have been met with more enthusiasm than others, there is a whole country of talented artists worthy of recognition; from boy and girl bands to some incredible soloists that stand out among all others.

On Dec. 1, Spotify released the much-anticipated Spotify Wrapped of 2022. Simultaneously, it revealed the most streamed artists on the platform at a global scale. In the K-pop scene, these were the 50 acts that marked the year.

Placing last on the ranking we have CHUNG HA, a former member of I.O.I. She became a soloist in 2017 but her popularity shot up with “Gotta Go” in 2019.

NCT U is the first sub-unit of the popular group NCT and debuted in 2016. Some of its most popular songs are “Make a Wish,” “YESTODAY,” and “From Home.”

Dreamcatcher debuted in 2017 with the album Nightmare. Before that, though, the group debuted under the name MINX, in 2014. Some of its popular songs include “VISION” and “BOCA.”

This Korean-Canadian artist was a part of I.O.I until 2017 and later became a soloist. Her debut single was titled “Birthday,” and her first album, XOXO, was released in 2021.

DPR Ian is a Korean-Australian soloist and former member of C-Clown. His first solo single, “So Beautiful,” was released in 2020, and the first album, Moodswings In To Order, this July.

This soloist has been around since 2012, but her first album, First Love, was actually released in 2013. Lee Hi’s most popular songs are “Breathe,” “ONLY,” and “HOLO.”

The group’s first EP, Got It?, came out in 2014, and hit number one on Billboard’s World Albums chart. GOT7 became known for singles like “Girls Girls Girls,” “Just Right,” and “If You Do.”

In October 2022, BTS’ Jin made a solo debut with the single “The Astronaut,” but as every K-Pop fan is aware, the singer was already releasing music before that. His solo discography includes singles like “Tonight,” “Abyss,” and the viral “Super Tuna.”

NMIXX debuted in February 2022 with the album Ad Mare. Later, the group dropped another single album, Entwurf, which brought in better numbers than the first. “O.O” and “Dice” are NMIXX’s best-knwon tracks.

DAY6 is a pop-rock band that debuted in 2015. Their first EP, The Day, secured the number two spot on Billboard’s World Albums chart. DAY6’s discography includes hits like “Congratulations” and “You Were Beautiful.”

Before being discovered, BIBI used to release self-produced tracks on SoundCloud. In 2019, she officially debuted with the song “Binu.” Since then, BIBI has released a studio album, two EPs, and various singles.

Although Jimin’s official solo debut is planned for 2023, the singer has done well for himself until now. His releases outside BTS include popular songs like “Promise,” “Christmas Love,” and “With You.”

TWICE’s Nayeon started her solo career this year, with a self-titled EP, which shot to number seven on the Billboard 200 chart. Her best-known track is the album’s single, “Pop!”

Best known for songs like “Egotistic,” “HIP,” “Starry Night,” and “ILLELLA,” this girl group is heavily praised for its solid vocal performances. MAMAMOO’s career began in 2014, with the EP Hello.

Songs like “I Got a Boy” and “Gee” made Girls’ Generation popular since its debut in 2007. In 2017, the group entered a hiatus but made a comeback this year, with the album Forever 1.

Sungwoon is a former member of Wanna One and Hotshot. His solo career began in 2019, with the EP My Moment. Sungwoon’s best-known songs include “Don’t Forget” and “With You.”

Formerly a member of 2PM, Jay Park opted for a solo career, debuting in 2010. Some of the rapper’s most well-known songs are “All I Wanna Do, “Mommae,” and “GANADARA.”

Agust D is an alias of BTS’ SUGA. Under this name, the rapper has released two mixtapes, Agust D and D-2. Three of his best-known songs are “Daechwita,” “Agust D,” and “Give It to Me.”

Jessi is an American-Korean singer and rapper. Formerly a member of Uptown and Lucky J, the artist became popular solo with the hit song “NUNU-NANA,” from the EP Nuna, released in 2020.

Active since 2016, LOONA began as a 12-person girl group; however, very recently a member left the group amid controversy. Currently, LOONA has five EPs out, the latest being Flip That.

Although Kep1er was formed in 2021, the group debuted early this year, with First Impact. A few of its most popular songs are “WA DA DA,” “MVSK,” and “Up!”

Around since 2015, MONSTA X is known for its more aggressive sound. The group has nine albums out, two of those in English, namely, All About Luv and The Dreaming.

In its prime, BIGBANG was a huge name in the K-pop world. Although the group was on a hiatus, its recent comeback has thrust the band back into the public’s eye. BIGBANG’s biggest hits are “BANG BANG BANG” and “Fantastic Baby.”

Despite being active since 1999, PSY’s global debut happened in 2012, with “Gangnam Style.” The following year, “Gentleman” made some waves in international waters, but since PSY has kept a lower profile. This year, the single “That That,” featuring BTS’ SUGA, thrust the artist back into the spotlight.

26. Star to a Young Culture

Better known as STAYC, this group had its debut in 2020 with a self-titled album. Since then, the group released two EPs and single albums, the most recent being We Need Love.

NewJeans debuted this August and quickly became a phenomenon in South Korea. Because the group is so recent, they only have four songs out right now: “Hurt,” “Cookie,” “Attention,” and “Hype Boy.”

LE SSERAFIM debuted in May 2022, with an EP titled Fearless. In October, a second EP, Antifragile, was released, beating the previous record in sales, and hitting number one on the Billboard Japan and World Albums charts.

Despite being a member of Girls’ Generation, Taeyeon’s solo debut happened in 2015, with the EP I. Since then, the singer has also released three studio albums, titled My Voice, Purpose, and INVU.

Here is another BTS member who has made it to this list. While V’s official solo debut is still to come, the singer does have a few solo songs under his name. “Winter Bear” and “Sweet Night” are by far the most popular.

TREASURE was created in 2019 through a competition reality show, and debuted in 2020. Fans consider “BOY,” “I LOVE YOU,” and “MMM” some of the group’s best songs.

Active since 2012, EXO is a Korean-Chinese group that originally debuted with 12 members. Now, the group is down to nine. EXO’s first studio album was XOXO and some of its best-liked songs are “Monster,” “Love Shot,” and “Call Me Baby.”

This NCT sub-unit debuted in 2016 but gained popularity in 2017 with “Cherry Bomb.” Other well-known tracks that contributed to the group’s fame are “Kick It,” “2 Baddies,” and “Sticker.”

Treasure EP.1: All to Zero was ATEEZ’s debut album, released in 2018. Three studio albums and 11 EPs later, ATEEZ has become one of the most popular groups in South Korea.

IU is one of the most beloved soloists in South Korea. She has been active since 2008, and some of her biggest hits are “Good Day,” “LILAC,” and “eight,” which was produced by BTS’ SUGA.

After BTS announced its hiatus, j-hope was the first member to debut solo. His studio album, Jack in the Box, was a success, with the singles “Arson” and “More” hitting number one on Billboard’s World Albums chart.

This NCT sub-unit was created in 2016. The group has released its fair share of hits until now, with some of the most popular tracks being “BEATBOX,” “BOOM,” and “Hello Future.”

Between its debut in 2021 and now, this girl group has released three single albums, Eleven, Love Dive, and After Like. IVE’s most popular songs are the title tracks of each album.

Lisa debuted solo in 2021, with the single album Lalisa. Outside BLACKPINK, the singer has released three songs, “Lalisa,” “Money,” and “SG,” the latter being a collaboration track.

The quartet has been active since 2020 when aespa released the single “Black Mamba.” Since then aespa has dropped two EPs, Savage and Girls, and singles like “Next Level” and “Forever.”

Active since 2014, Red Velvet is known for its duality, contracting two different sides of the members: the “red” and the “velvet” sides. The group’s best-known songs are “Psycho,” and “Bad Boy.”

(G)I-DLE has been making an impact in the K-pop world since 2018 when it released I Am, the group’s first EP. Their currently popular tracks include “Nxde” and “TOMBOY.”

BTS’ Jungkook had his official solo debut at the World Cup premiere, with the single “Dreamers.” Before that, he released and collaborated on a few other songs, like “Stay Alive,” “Still With You,” and “Left and Right.”

ITZY debuted in 2019 and has risen quite quickly in popularity over the years. The group is known for including messages of authenticity in their songs. Some of ITZY’s popular tracks are “WANNABE,” “Not Shy,” “ICY,” and “DALLA DALLA.”

Created on the South Korean competition show I-Land, ENHYPEN debuted in 2020, with the EP Border: Day One. Since then, the group has released two studio albums, Dimension: Dilemma and Sadame.

Best known as TXT, the group debuted in 2019. TXT’s first EP, The Dream Chapter: Star, hit number one on Billboard’s World Albums chart and made it to number 140 on the Billboard 200.

SEVENTEEN has been around since 2015, and over the years has released 12 EPs and four studio albums. Some of the group’s best-known songs are “Mansae,” “Don’t Wanna Cry,” and “HOT.”

Despite releasing the EP Mixtape in January 2018, the group officially debuted later that year, with I Am Not. Until now, Stray Kids has released two studio albums, Go Live and Noeasy.

Active since 2015, TWICE is one of the best-known K-pop groups out there. The band’s first studio album was Twicetagram and their most recent was Celebrate. Their most popular songs include hits like “FANCY” and “Yes or Yes.”

Formed in 2016, BLACKPINK is currently the most popular Korean girl group worldwide. Some of the songs that majorly contributed to BLACKPINK’s popularity are “How You Like That,” “DDU-DU DDU-DU,” and “Kill This Love.”

Indisputably the biggest Korean act in the world, BTS takes the number one spot. The group has been active since 2013 and became a global phenomenon in recent years. Some of their best-known songs are “Butter,” “Dynamite,” “DNA,” and “Fake Love.”

A lot of these artists are probably already on your playlist, but hopefully, you’ve discovered a few more. Who knows, they might even end up being a part of your Spotify Wrapped next year.