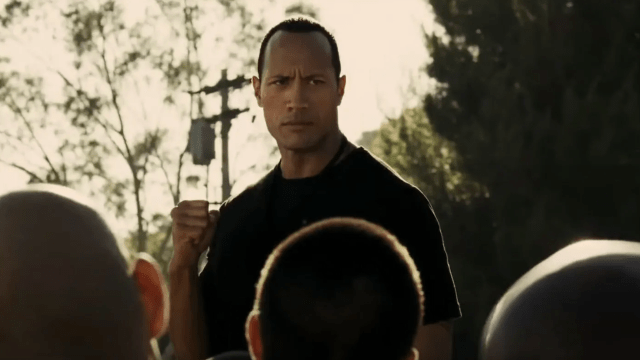 Dwayne “The Rock” Johnson is undoubtedly one of the most profitable and sought-after working actors in Hollywood today — with major projects like San Andreas, Rampage, Fast Five, and (very soon) Black Adam under his belt. But, before Johnson was fully bathed in his influential big-movie stardom, his leading role in sports drama Gridiron Gang uncovered the world of heartfelt football and showcased some of Johnson’s best work.

Directed by Phil Joanou, Johnson stars as Coach Sean Porter — a no-nonsense worker at a juvenile detention camp who, after fearing for the future lives of the boys in the juvenile system, begins a football program at the center to keep the boys out of trouble and to implement team-oriented skill sets and discipline. The film is loosely based on the real-life story of the Kilpatrick Mustangs in Los Angeles County back in the ‘90s. Alongside Johnson are Xzibit, L. Scott Caldwell, and Kevin Dunn, who all deliver unforgettable performances.

But, even with the movie’s strong push for a heart-warming feel and positive affirmation from the coaches, stone-faced critics weren’t impressed with the “cliche execution” of the film. As it stands, Gridiron Gang currently holds a measly 42% score on Rotten Tomatoes, despite having one of the biggest money-making stars in the world as its lead.

Critics be damned however, as eagle-eyed Netflix subscribers decided to give the Dwayne Johnson vehicle a second chance — and awarded it with a newfound life on the streaming charts. As per FlixPatrol, Gridiron Gang has jumped a considerable number of spaces to crack into Netflix’s most-watched movies, and it doesn’t appear as if it will stop there.