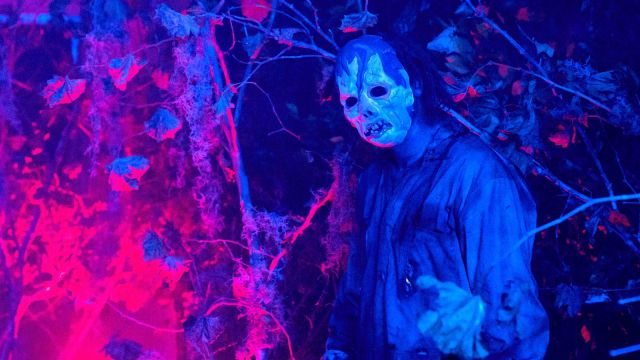 Clowns are universally agreed to be scary, unneccessary, and allowed to get away for too long with cars with TARDIS-like properties, so they’re perfect for horror movies. Everyone and their cat is afraid of clowns, and if you’re not, you’re clearly not paying attention.

Clown horror films have been punctuated in recent years by Pennywise in It and Art from the Terrifier duology, but one mostly mediocre slasher from 2019 is getting revaluated in Haunt. Mostly forgotten, thanks to its title which it shares with countless other films, audiences are beginning to turn around on it.

Haunt follows in some very typical genre shenanigans of a group of friends exploring a place they should absolutely never explore, while being subjected to torment from three insidious and bloodthirsty slashing fiends. If it sounds familiar, it’s because it is.

But there’s a certain pleasantry to such a basic premise and a no-frills approach to its mayhem, with several remarking on its unpretentious nature being a major drawcard. Elevated horror is all the rage nowadays, but sometimes you just want to see some splatter.

Perhaps an indictment on the overall average-to-poor quality of straight-up slashers of recent years, one user even called it the best horror flick of 2019 which is ballsy call given the release of Midsommar.

Horror out of all the genres depends most on positive word of mouth and a general vibe being built from hardcore fans, and while Haunt had a bit of joy in that aspect in 2019, its middling reviews hit the film hard. Sitting at a respectable but not ground-breaking 69 percent critics score, it has 100 percent approval from audiences on Rotten Tomatoes.