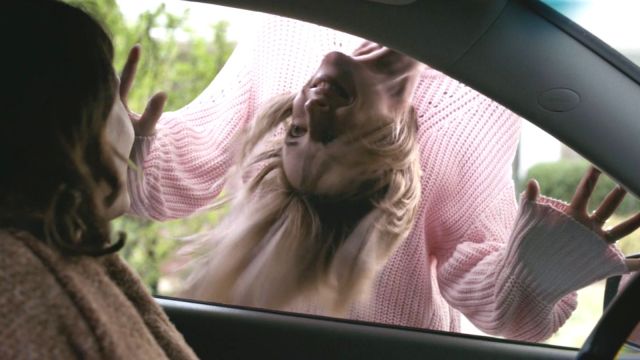 Horror owes so much to marketing to get into the consciousness of the public before they’ve even seen the film, and the upcoming release Smile is dialing the effort up to eleven.

Before everyone became well-acquainted with 2007’s Paranormal Activity, it was marketed in such a way audiences needed to “demand” the film come to their local cinema. The idea built hype very quickly and led to becoming the most profitable film of all time.

Here comes Paramount’s Smile. In an early effort to get into audiences, live events such as morning shows and baseball have seen mysterious amounts of people wearing fluorescent yellow tops with “SMILE” emblazoned upon them as they follow through with their shirt’s text.

It’s a fantastic example of guerrilla marketing and is clearly working so far to drum up interest in the film. Smile will be the directorial debut for director Parker Finn, with 13 Reasons Why’s Sosie Bacon in the lead role for the supernatural thriller. In case you were wondering, she is indeed the daughter of Kevin Bacon.

One particular actor went above and beyond to show up, with her everywhere from NFL to MLB and anything else with a live cross in California. To quite a wise woman, good for her.

A full release is set for Sept. 30, as the spooky season comes ever closer.