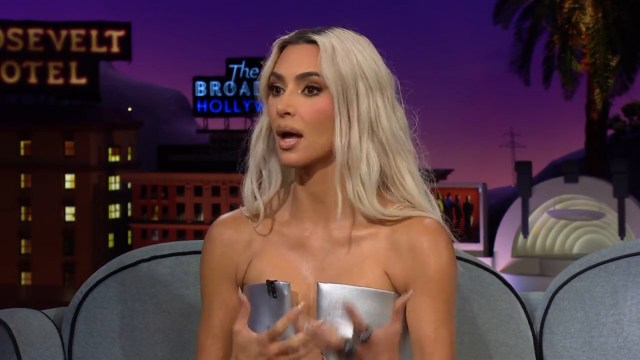 Wednesday night, Kim Kardashian appeared on The Late Late Show with James Corden and recounted a story she has told before, but has mostly gone under the radar, about that time when she was fully expecting to be gifted a free Chanel bag but cried….even though her mom got it instead. In fact, that’s also a reason why she cried.

In 2013, Kim K, not quite yet a billionaire at the time, flew to Paris with her mom, Kris Jenner, to have a fashion shoot with Chanel’s own Karl Lagerfeld. Rumor was that when you worked with Karl for the first time, he gave you a Chanel bag as a gift. Such rumors were true. Kardashian even told James Corden that she was dreaming about what bag he was gonna give her.

Funny enough, Karl took s a greater liking to Kim’s mom, who wisely dressed that day covered head-to-toe with everything Chanel. This may have swayed Karl but it didn’t sway Kim as she was texting friends to tell them how excited she was about getting this bag.

Seven months pregnant with North, Kim had already decided that the bag would belong to North and would be displayed in her room. What kid doesn’t dream of a Chanel bag in their room? However, that sly mother of hers was working Karl who, by Kim’s account, was basically falling in love with her. Can you blame him, though? I mean, she was dressed in Chanel.

Then, it happened. The Chanel bag. That glorious bag that Kim dreamed of was finally before her. She explained to Corden, “He (Karl) pulls out a lego clutch bag, a really popular bag he did and it was a crystal one. It was a one of a kind runway piece that didn’t even go into production.”

Did we mention that she was really excited telling this story (again)? When the moment of truth arrived, Kim tells us how it went down. Karl, with the bag in his hands, clearly intended to give it away. “Then he goes over me and hands it to my mom. I went to the bathroom and started hysterically crying and I’m pregnant and hormonal, flew all the way to Paris for this.”

In addition to reacting with adult tears over not getting free stuff, she added, ” I called my cousin and said, ‘This bi***!'”

Kris Jenner, ever the opportunist, said not to worry because she will put it in her will that North will get the bag. This seemed to satisfy Kim and surely it satisfied Kris who never has to give up the bag for the remainder of her life.

Kim then ended her horrifying tale by dropping one more, “That bi***!” about her mom.