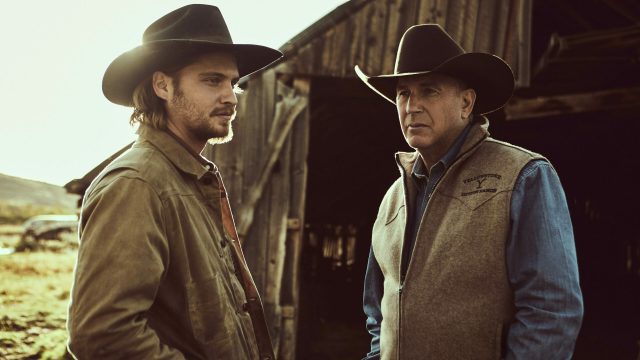 It’s National Dessert Day, and we’ve baked something special for fans of Paramount’s hit series Yellowstone. As we count down to the two-hour premiere of season 5, we’re wrapped up in all things Dutton. To celebrate the day devoted to treats, we’re about to take you on the culinary exploration of your dreams; through decadent, sweet, and savory flavors you’re sure to enjoy.

You might be wondering what Yellowstone has to do with a day devoted to dessert, or you might be thinking like we are and realizing you’ve already figured it out. The series is a cowboy drama, focused on a family in their most profound fight for survival — but they’re also serving up a lot of snacks.

We’re talking Dutton glory, the Rip Wheeler of it all, and the sweetness of everyone’s favorite charmer, Mo. It’s time to settle in for some fine dining — Yellowstone style.

In no particular order, follow us through a dessert menu unlike you’ve ever enjoyed before. No need to cleanse your palate between these dishes; they’ll all be the perfect fix for that sweet tooth.

Monica Dutton is a character that fans love to hate and also hate to love. She’s polarizing, but with good reason, her journey in Yellowstone is different than anyone else’s. She’s not quick to fall into line, even with her husband being John’s son. She’s not afraid to speak her mind or to stand up for what she believes in, and we just think pumpkin cheesecake suits her personality perfectly. She might not be everyone’s favorite flavor, but those who love her — love her. Plus, she is a stunner.

Here’s to Monica and wearing the Dutton name even when it’s hard.

When we first meet Teeter, she steals the show with pink hair, a hard-to-understand accent, and power about her that lets everyone know she is tougher than she looks. That attitude follows her through the series, as do the eyes of viewers who tune in. Teeter is stunning and naturally beautiful; her vulnerability makes it more real. She’s like the s’mores you love to snack on at a campfire; comfortable, delightful, and a must-have.

Here’s to our firey pink-haired cowgirl.

Colby, our dear Colby, he’s the delightful peanut butter banana nut bread you crave for an afternoon snack. He’s unassuming, he’s hilarious, handsome, and he’s also got a kick to him. Colby might not be the loudest guy in the room, but he’s always got something significant to say. He’s tough, he’s proud of the work he’s done, and he’s softening his sweetheart to everyone’s favorite pink-haired ranch hand, Teeter. Colby is handsome and charming, and we can’t help but love him.

Here’s to the perfect comedic and kind ranch hand we adore (and swoon over).

Mo is a caramel apple. He’s a simple man who doesn’t need much to be happy. He’s everyone’s go-to on an excellent fall day, and in all of the ways he’s understated — he’s also a favorite. Mo doesn’t have to be loud or attention-seeking to own a room, and he doesn’t have to voice his opinion to be heard. He shares nuggets of wisdom, often before you’ve even realized you’re experiencing one, and he brings power to the series in a way no one else does. He also does it while looking almost painfully handsome.

Beth Dutton… how can you describe her in words? We’ve all tried, but they seem to fail us. She’s sex appeal in its most authentic state; she’s stunning, powerful, and knows she steals the attention of everyone in any room she walks into. Beth is a spicy and warm rum cake yet somehow soft and delightful (most often, if you’re Rip Wheeler), but she shares some of that in rare moments with others too. We’re still trying to be Beth Dutton in our own way, channeling all of her fire and sultry nature.

Here’s to the tornado of Yellowstone.

You can’t talk about Yellowstone yummies and not mention patriarch John Dutton. Fans have had a crush on Kevin Costner for years, but his role as John just steps it all up a notch. He’s got a kick to him; he has to — he’s protecting his entire family and the land they love. He also channels the delectable apple crumble you crave on a fall afternoon. John can rock a cowboy hat like no one else, he owns his power and confidence even in moments of weakness, and those looks he gives Lynelle Perry — be still our hearts.

We understand if you’re craving some John Dutton and a spiced apple crumble, you’re not alone.

Kayce Dutton is the rich cherry cheesecake at the end of a long day, and he’s also quite easy on the eyes. There’s something in the Dutton bloodline that just hits right. Throughout the seasons, we’ve seen Kayce grow in confidence, and it’s certainly affected how he carries himself. He walks taller, enters a room with more power, and it’s appealing. During his vision quest in season 4, fans were torn because he was going through something intense, but he looked so good doing it that it was pretty distracting. If we’re being honest, Kayce is always pretty distracting.

We said these are in no particular order, but if you’re thinking about the best Yellowstone dessert, it will likely be Rip Wheeler. He’s the cowboy of our dreams. We’ve all had the fantasy of the strong and sultry guy who can come in and sweep us off our feet, know us better than we know ourselves, and tell us we look good in a neon glow.

There’s something about Rip Wheeler that’s just irresistible, as is that chocolate cake you just can’t get enough of.