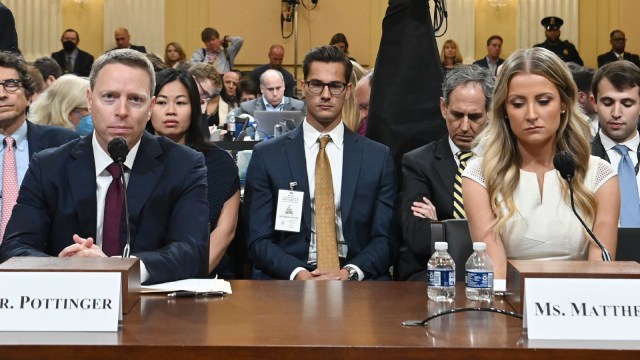 Thursday night’s hearing to investigate the Jan. 6th attack on the U.S. Capitol painted a grim picture of a sitting president hellbent on staying in power by any means possible, as we now know that former President Donald Trump watched the chaos unfold on television for hours, ignoring pleas from his children and advisors to step in.

But as gripping as the witness testimony was, viewers watching the hearing couldn’t help but be distracted by an attendee who bore a striking resemblance to Clark Kent.

But many watching at home, like Bravo’s Andy Cohen, just wanted to know who the heck the mystery man was.

But given the man’s dashing looks and glasses that look very similar to the ones Superman’s alter ego wears, it didn’t take long before “Clark Kent” was trending on Twitter.

“This is so infuriating you got Clark Kent about to go full Superman,” quipped one user.

Another joked about how the hearing must be a big deal if Superman is missing ComicCon, which just kicked off Thursday in San Diego.

However, another viewer pointed out that he’s obviously covering the hearing for the Daily Planet.

Plenty of people admitted to being distracted by the guy, which, again, is really saying something considering the weight of the testimony.

Others just hoped he wasn’t a Republican!

Although we still don’t know the man’s identity, New York Magazine journalist Yashar Ali revealed that he’s “not single,” which led The View host Sunny Hostin to make yet another Superman joke.

We hate to disappoint, but apparently, some people saw the man resembling Clark Kent leave the meeting with Matthews, so it would indeed seem to suggest that he’s both taken and a Republican. But, still not as disappointing that after all this, Trump and his cronies will still almost certainly skate away with few or zero repercussions.