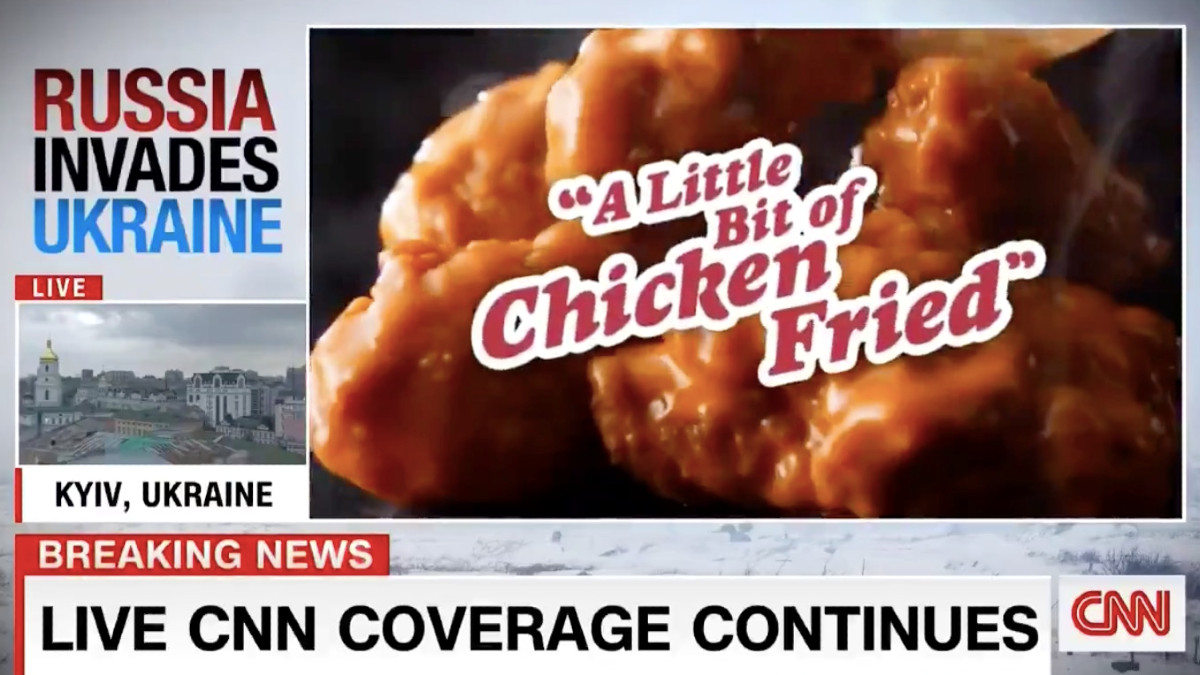 Russian President Vladimir Putin launched a full-scale invasion of Ukraine early Thursday morning with a series of missile attacks launched just hours before dawn, putting the Ukrainian capital of Kyiv and the Russian-bordered city of Kharkiv in danger. Naturally, millions of people around the world are glued to their televisions in the wake of the assaults — which led to an awkward moment when CNN transitioned from live coverage to a commercial break featuring the Applebee’s chain of restaurants.

The moment was captured for posterity by the right-wing “For America” Twitter account In the 19-second clip, aerial footage captured over Kyiv picks up air raid sirens, before abruptly cutting to a multi-screen view with Applebee’s featured in the main frame. What’s more, it started with the twangy opening chords of the 2008 song “Chicken Fried” by the Zac Brown Band.

That led the account to quip, “This missile attack is brought to you by Applebees!!”

The specter of war doesn’t put us in the mood for fried chicken and cold beer — though we wouldn’t blame anyone for wanting to knock back a whiskey or five in light of current events.

As various versions of the war-to-Applebee’s clip began to go viral on Twitter, people just couldn’t get over the “brutal timing” of the segue.

“WW3 sponsored by Applebees,” cracked one user. “We’re living in an episode of South Park.”

Keith Olbermann likewise made a version of the “sponsored by Applebee’s” joke, as did many others.

One user borrowed a familiar meme to imagine how Applebee’s brass was taking the unexpected publicity.

But as radio host Conor Sheeran pointed out, the Zac Brown Band probably isn’t super thrilled to be part of this escapade either.

“Applebees couldn’t get a Super Bowl commercial, so they took the WW3 CNN slot,” commented another user, calling the move “savage.”

Comedian Corey Ryan Forrester sounded off in a short video, reminding us that no matter what is going on in the world, we’ll know “nothing is as important as making a quick buck.”

He simply said the thing many of us were thinking, “Not now, Applebee’s.”