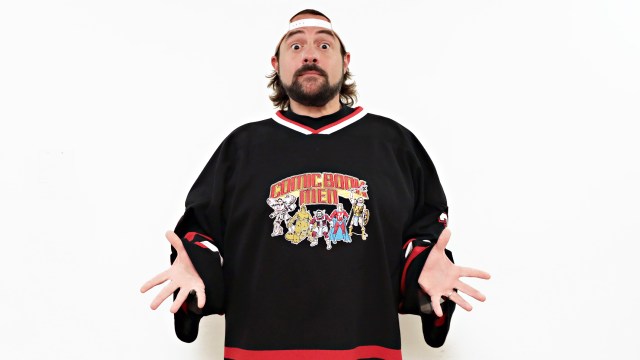 Over the last quarter of a century, Kevin Smith has carved out a niche for himself in the world of filmmaking, and he’ll never be the guy the major studios turn to when it comes to finding a director-for-hire to hit the mandated plot and story beats while keeping the schedule on track and the production under budget.

The 50 year-old has helmed thirteen features, with fourteenth Killroy Was Here arriving later this year, but only once was he a hired hand tasked with bringing somebody else’s script and vision to life. Unfortunately for Smith, the project in question was the dismal Cop Out, the forgettable buddy comedy that teamed Bruce Willis up with Tracy Morgan, and the most notable thing about it was the tension between the action star and his director, which saw them throw various barbs at each other once shooting had wrapped.

However, despite Smith’s sandbox of preference being low budget genre films, he did write and direct Jersey Girl back in 2004, which was clearly designed as a major commercial crowd-pleaser. Ben Affleck stars alongside Jennifer Lopez and Liv Tyler in the $35 million dramedy, which still ranks as Smith’s most expensive movie ever, but it barely recouped the budget in theaters and received tepid reviews from critics.

In a recent interview, though, the View Askewniverse creator admitted that he’d love to take another crack at Jersey Girl and give it the same treatment as Zack Snyder’s Justice League.

“Paramount was talking about, ‘Hey we want to put out Jersey Girl this year’. I was like, ‘Well I have the extended cut, which I’ve shown at Vulgarthon’. And if they allow me to, I wanna call that Jersey Girl: The Snyder Cut. It’s a big moment for Snyder but it’s also a big moment for filmmakers in general. Particularly filmmakers like myself, and not Zack Snyder, who have experienced a lack of success to get a second bite at the apple like this and to do it exactly the way you want, it’s cool.”

There’s obviously a huge difference between a $300 million DCEU blockbuster and a forgettable Kevin Smith movie, but he’s right in saying the fact that the Snyder Cut of Justice League even exists could open new doors for less established talents, even if Jersey Girl feels like a strange candidate.