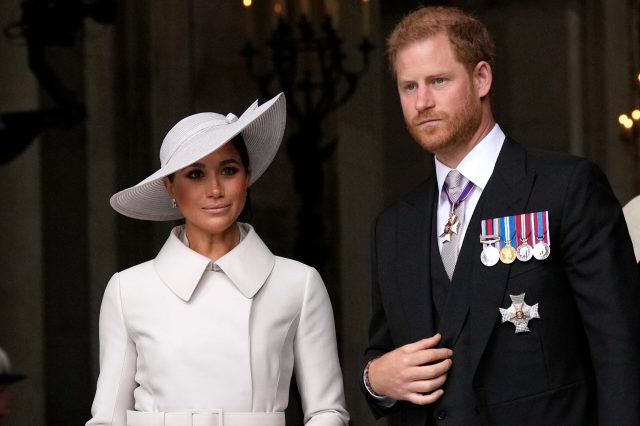 According to a report this morning from The Sun, King Charles III allegedly told Harry, the Duke of Sussex, that it would be inappropriate for his wife to come with him to say goodbye to the Queen. Harry thus traveled alone to Balmoral Castle, the Scottish estate, which acts as something of a holiday home for the Royal Family, where his grandmother was ailing and ultimately passed away.

A source that spoke to The Sun emphasized that, “He [Charles] made it very, very clear Meghan would not be welcome.” However, it is believed that Charles also made it clear to Prince William that Kate Middleton shouldn’t be there either, explaining, “The numbers really should be limited to the very closest family.”

Only three members of the Royal Family were at the Queen’s side when she passed, including her daughter Anne, her son Charles, and Charles’ wife, Camilla. It is believed that Princes William, Edward, and Andrew were at the castle or en route at the time. Harry confirmed that he was on his way when his grandmother passed.

It’s also worth noting that in his first public address as King Charles stated, “I want to express my love for Harry and Meghan as they continue to build their lives overseas.”

Meghan and Harry had been on a visit to Europe when the news of Queen Elizabeth’ health broke. They will stay in the U.K. while mourning, though it’s unclear for how long. Earlier today, a statement was released from the Buckingham Palace announcing that the funeral for Queen Elizabeth II will be held on Monday, Sept. 19, so clearly Harry and Meghan, the Duke and Duchess of Sussex, will stay at least until then.

They spent their day today with William and Kate at Balmoral Castle, where they observed the many tributes that the public left outside of the estate. Some people suggested that perhaps, in passing, the Queen will bring the brothers closer together. Prince William has since confirmed that he invited Harry and Meghan to observe the tributes together, a significant gesture in their relationship when you consider they all but avoided each other at the Queen’s Platinum Jubilee this past June.

Harry’s apparent tell-all book is also being released before year’s end, which could add to the drama of the relationship between the brothers and make Harry’s overall relationship with the Royal Family further tarnished. No one knows for certain what exactly is in the book and one wonders whether or not recent events will curve Harry’s desire to release it or, in the least, change it slightly.