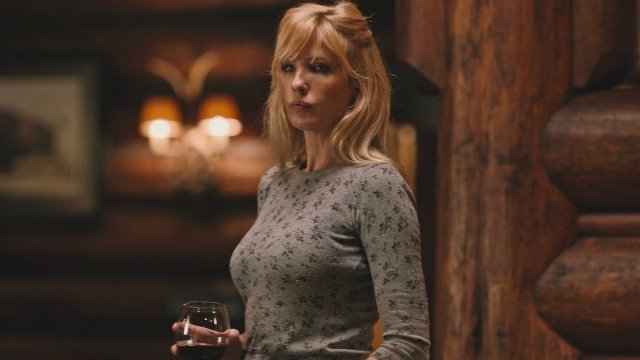 Happy Friday, Yellowstone fans; we’re officially two days away from the season five premiere of everyone’s favorite cowboy drama. Taylor Sheridan will be taking us on a wild ride this go around, and it will be more intense than anything we’ve seen of the Dutton family so far. From the new job for John Dutton to the vision quest Kayce took at the end of season four, there’s a lot on the line in the upcoming episodes, and it’s not going to be smooth sailing for any of our beloved characters. Both Cole Hauser and Kelly Reilly are talking Yellowstone in recent interviews ahead of the new season, and from becoming a heartthrob to Beth’s promise to John Dutton, there’s a lot to unpack today. You know the drill from here; grab your Yellowstone-loving bestie and your favorite drink because we’re riding in.

Cole Hauser talks realizing that Rip Wheeler is a heartthrob

Cole Hauser is a handsome man; there’s no denying that, no looking past the fact as if it were up for debate. It’s easy to assume that when you’re that good-looking, you sort of know it, but that’s not the case with Hauser.

In fact, it took a very…particular moment for him to realize that Rip Wheeler is a heartthrob in Yellowstone and that Hauser himself brings much of that to the table.

Speaking to FOX News, Hauser said a woman in public reacted to him so strongly that he had to call his mom about it.

We don’t condone touching someone without their consent, but FOX reports that Hauser chuckled as he explained the situation to them. It’s a story Hauser himself is sharing, so we had to let you guys in on it, too.

Those reactions might not be something you ever truly get used to, but Hauser has accepted his heartthrob status after years of being on the series.

Kelly Reilly speaks on the themes for season five

Kelly Reilly is opening up about season five, and the overarching themes for the 14-episode run fans will soon dive into. Speaking to Entertainment Weekly, she says things for Beth are changing significantly, yet somehow staying the same.

Reilly also touched on the fact that her relationship with Jamie isn’t going to change for the positive just because of what happened with his biological father. It might pause the situation for a moment, but it doesn’t stop the Beth Dutton train from rolling.

“To her, he is the biggest enemy to her father. That threat does not go away because of what he does to his biological father … it just delays it for a moment.”

She also spoke about the upcoming season’s theme: fight or…fight. There is no flight, no running from what’s on the horizon; they must risk it all or lose it all. That’s the name of the game.

“This season you can see it all coming to a head. The fight’s coming from every direction. Beth is more like a wild animal this season than ever. When I read the scripts, it made me think that she is, for the first time, maybe afraid she will lose it for her dad.”

She continues by saying that this season’s content is different from what fans have seen before, not that we’re not used to the violence and pain that often walks with us through Yellowstone, but it’s got a different tone.

“It’s dark, brutal and desperate stuff — gaining power, losing it, defending and fighting. It’s bloody and at times beautiful in how it breaks them into their core selves.”

“No Kindness for the Coward” is the eighth episode of Yellowstone‘s fourth season, and the title of this one says it all. The cowards of Yellowstone will never feel kindness and support; no sunshine and rainbows are on the horizon for them.

We look at the Duttons of days past at the beginning of the episode, and we learn that the power of the family and the matriarchs in the story are deeply engrained into the fabric of the series. They teach their families to pray for good, to look for the good, and to put good out so that it comes back to them.

After a few other flashbacks, we get to the heart of the episode in which Jamie seethes at his father’s decision to run for governor. Of course, those at “Camp Jamie” further perpetuate the idea that John isn’t running for governor because he wants to; he’s running to stop Jamie.

While that might not be untrue, Jamie’s “support” isn’t coming from a place of love or kindness; it’s coming from people who want nothing but harm for the Dutton family. They’ll use any opportunity they can to knock John Dutton, and they’re taking advantage of Jamie’s anger in this moment.

We see Jimmy continuing to thrive at the 6666 Ranch in Texas, and it’s more apparent than ever that John made the right decision to send him there. Jimmy didn’t want to leave the Dutton Ranch, but he is learning and growing in Texas, and his heart is also finding a match in the woman he met, Emily.

We see the two on their first actual date, and the dinner they share is precious. It’s a new side of Jimmy, one that’s more comfortable and confident, less chaotic and all over the place.

A favorite scene of ours takes place in this episode, and it’s the moment when Rip finally confronts Beth about her dinner table antics. She can’t sit through a meal without having some blow-up where she ends up storming off. It’s so routine you could set your clocks by it; when it happens this time in front of Carter, Rip goes to talk to Beth about it.

She hates what the dinner table stands for, some big happy family unit that they’re not and won’t ever be. Rip finds a solution for Beth’s disdain for the table, and we soon see Carter, John, Beth, and Rip around a much smaller table in a different room. Beth looks over and thanks Rip, and he tells her that life is plenty hard without her making it more difficult. They laugh, but the tears in Beth’s eyes prove that she is deeply touched by Rip’s kindness and sweetness in handling all versions of her.

So…where do we sign up for a Rip Wheeler of our own?