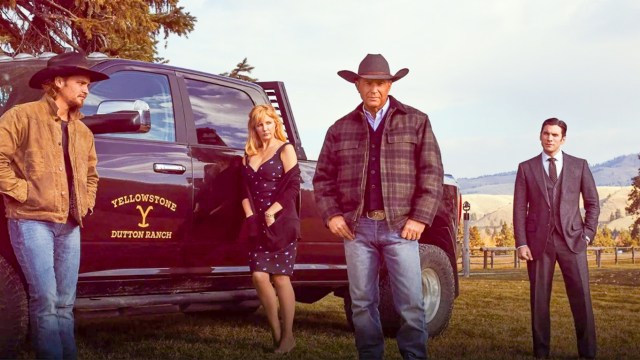 It’s a beautiful day to be a Yellowstone fan, and we could argue that it always is, but there’s something special in the air today. Fans have received news regarding some of our favorite characters in the upcoming season, and we’re ecstatic. Okay, so we’re almost entirely delighted. There’s a healthy dose of struggle in the future for the Dutton family, leading to a bit of hesitation. The Duttons have been through a lot:

It’s not sunshine and rainbows that keep fans coming back for more; it’s the mix of good and evil, the sultry and the heartbreaking, and of course — the love story between Rip and Beth. As we dive into today’s news, we recommend relaxing with your favorite beverage; there’s a lot to unpack here!

Kelly Reilly notes that Beth has always had an intense pull to Rip, and it’s something she chooses not to fight.

“Beth has always been devoted to Rip. Marriage does not change her. I think his love for her and hers for him is one of the very few things that keeps her demons at arm’s length (mostly).”

Rather than struggling against it, she falls into the comfort Rip provides her like a warm blanket. He’s perhaps the only person in this world who can give her something that feels like home, safe enough for her to let her guard down, at least some of the way. She also notes that she hasn’t let him all the way in yet, something viewers of the series are already aware of.

Beth is keeping big secrets from Rip, and it’ll be interesting to see the ways in which she reveals them.

“The war feels internal this year for her. She’s haunted by the past, afraid for the future and fighting with all she has for the present moment.”

Of course, like the true gentleman he is, Rip is ready to help Beth break her walls down, and he’s going to work with her this season through several moments that are beautiful and sometimes quite “slow-burn-y.”

“In the beginning, there’s some wonderful moments between the two of us, some stuff that she’s going through in her past, that she’s having to acknowledge for the first time, and me trying to help her through that.”

If anyone can help Beth, it’s Rip, and we can’t wait to see what happens when she’s finally ready to reveal the innermost hurt she’s kept from him. We know there’s a heavy amount of fear involved, but Rip is the guy that’s stood by her side every day since they’ve met, the one who tells her that she never has to say the words, “I’m sorry,” to him. There will be a level of hurt involved when he finds out, but she’ll also see a side of him that understands; Beth just has to allow the moment to happen.

Luke Grimes spills the details on Kayce’s biggest hurdle yet

Luke Grimes took a moment to cue fans in on the future of Kayce Dutton, and it’s evident that we’ve not seen the last of his vision quest and the ominous future he saw during it. Kayce saw the end of “us” and it’ll take some time to find out which “us” he’s talking about, but he’s not exactly in a position to want to lose anyone. Unless, of course, they’re an enemy to the Duttons.

“When you meet him [in season 5], he’s off the ranch. He’s sort of almost happy. He seems like he likes his little life on the res with the family. But as the story progresses, you realize he can’t stay away for too long. Something calls him to take care of that legacy.”

The legacy he’s talking about is that of the Dutton family, and it’s a complex one. Life on the ranch is more multifaceted than most will ever know. Every ranch owner knows struggles, and each ranch hand knows a different way of life, but the Yellowstone Dutton Ranch immediately does two things to everyone associated with it.

It gives them a layer of protection (when they take the brand) and paints a target on their back. What exactly that target means is different for everyone, but we’ve seen enough despair, fights, and heartache to know that pain doesn’t spare the Dutton family or their associates; instead, it seems to gravitate towards them.

Taking a step away from Yellowstone‘s core series, the upcoming prequel, 1923, is growing again with an exciting announcement today.

Jennifer Ehle (Zero Dark Thirty, Little Men) is joining the cast as a nun named Sister Mary O’Connor. She teaches at the local School For American Indians located in Montana, and she’ll undeniably have a relationship with the Duttons. One of the main ingredients in the Dutton family story is their relationship with Native Americans and the fight for land. We’re curious to see how 1923 unveils more of that story, as 1883 only slightly unveiled it.

Season 5 can be described using these words

Grimes also talked about season 5 as a whole, not just what’s in store for his character, Kayce. In the midst of everything he’s going through, including the conclusion of his vision quest, he’s got a lot to balance in his own regard — but he won’t be the only one.

He notes that each season feels different from the last and that Taylor Sheridan is still using his tactics of including as many twists and turns as possible while still writing a story that makes sense and keeps viewers interested.

“Every season has felt incredibly different. I think that’s the beauty of Taylor’s writing. He knows how to make this show just take every twist and turn it possibly could, and to keep it so fresh. Every year has felt very different from the last.”

Here’s to an exciting new season and a lot of fun on the horizon. Yellowstone kicks off with new episodes on November 13, and it’ll be one hell of a ride.