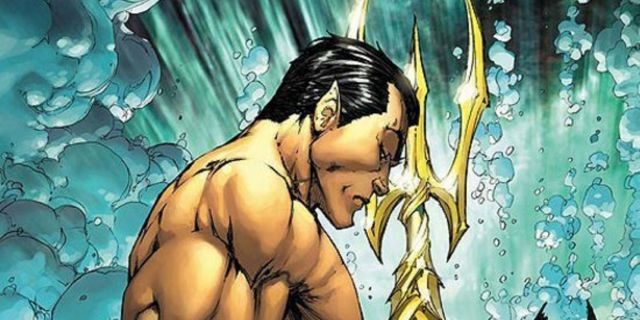 Black Panther: Wakanda Forever isn’t just introducing a new person to the mantle of Black Panther, but also an entire new subsection of Marvel lore with Namor. But it’s the cosmic side that people hope Namor brings to light.

Literally “Roman” spelt backwards, Namor in Marvel Comics has always been a bit of a meanie. Famously against taking sides in the Second World War, deeming both sides bad (nice work, Namor, definitely aged well), the Sub-Mariner has often been an antihero and member of the absolute crème de la crème of hubris that is the Illuminati.

With Wakanda Forever, he’s again been pitched in a more villainous light, but fans are now wondering if part of his introduction to the Marvel Universe is thanks to that moment from Eternals which fans have been dying for anyone in the Marvel Cinematic Universe to reference.

The giant Celestial body emerging from the core of the Earth, striking through the planet’s oceans and extending through to the outer atmosphere, you’d think, would be a bit of a major news story within Earth-616. You’d think. But since Eternals debuted in cinemas late 2021, nobody has spoken a word about it.

Perhaps by now on Earth, they’re so used to non-sequitur appearances of giant beings that it really did just feel like another Thursday. Namor, though, the King of Atlantis and protector of the oceans would surely be a bit fired up over the whole ordeal. If there’s ever been a time for someone to call back to Eternals, it’s with Black Panther 2.

Tenoch Huerta will portray Namor in his first live-action appearance, some 83 years after the character first made a comic book appearance. Black Panther: Wakanda Forever is scheduled to release Nov. 11.