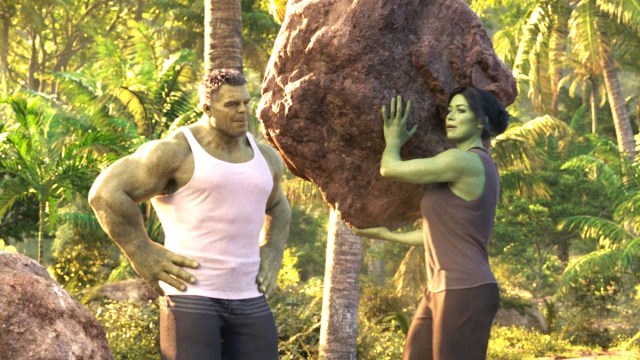 She-Hulk: Attorney at Law is currently the most-watched show on Disney Plus and has scored an impressive 88% on the Tomatometer. We’re now two episodes into the series, with the show settling into a comedic groove as Tatiana Maslany navigates the complexities of superhuman law while trying to figure out her new life as a ‘Hulk.’

But some aren’t happy. She-Hulk: Attorney at Law is explicitly about “female-centric themes”, with Jennifer Walters shown dealing with sexism and arguing that she can better control her Hulk side because as a woman she’s already used to suppressing her anger. To perpetually online incels, comments like these go down about as well as flicking holy water onto a vampire and an all-too-predictable round of review-bombing commenced.

But, a new campaign on r/MarvelStudios is trying to get fans to see the error of their ways by asking them to apply the same standards to She-Hulk as they did to Tony Stark:

Replies point out that it’s a bit immature to get genuinely angry about a movie or TV show, and while you can obviously be annoyed by it or criticize it, acting like it’s some kind of huge personal offense is just childish.

But, others counter this ‘test’ by saying that no MCU movie ever portrays Tony Stark as being unambiguously “in the right.” Throughout his adventures, he’s depicted as a damaged and borderline obsessive who continually makes terrible personal and professional decisions that he then has to make right. Then again, we guess sacrificing your life to save the universe does erase more than a few bad calls.

It’s worth remembering that as of right now we’ve only spent about 40 minutes in Jennifer Walters’ company and have no idea what her ongoing arc will be. It’s possible that her confidence that she can control her Hulk side is totally misplaced and we’ll begin seeing her struggling with a more ‘Savage’ She-Hulk as the action ramps up.

But, until then, if She-Hulk: Attorney at Law makes you froth at the mouth with its very light and mainstream feminist commentary there’s a simple solution: Don’t watch it.