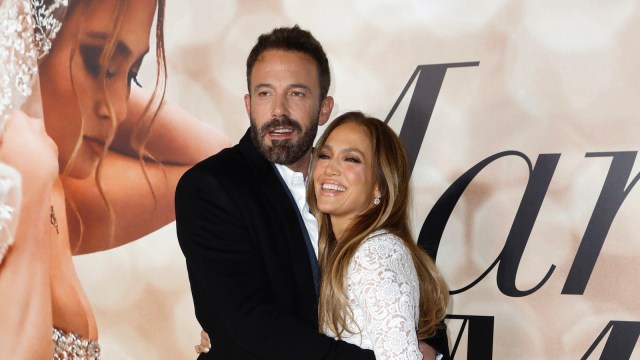 After 20 years from the proposal to the final walk down the aisle, a few weeks might not seem too long a time to wait for wedding photos. But when it comes to her nuptial images, Jennifer Affleck nee´ Lopez apparently still feels good things come to those who wait. It’s been weeks since she sealed the deal with her new hubby Ben Affleck, but it’s only recently that she’s begun to show a few glimpses of her best day through her newsletter.

The former JLo (is it JAf now??) shared photos of her and Affleck in the latest edition of her subscriber newsletter On the JLo, announcing the images on her own Instagram account. The couple tied the knot on July 16 at a small Las Vegas ceremony before repairing to Affleck’s 87-acre estate on Hampton Island Preserve in Georgia, where they exchanged “I do”-s a second time before a larger group of family and friends.

Lopez sported a classic and refined look at her Vegas ceremony, wearing a white lace off-the-shoulder gown with a sweetheart neckline from the Zuhair Murad Bridal Spring Summer 2023 with a matching veil and fishtail train.

“We felt the hair shouldn’t be overly done,” hairstylist Chris Appleton told Vogue. “I pulled back the front of the hair on either side to keep the face open—still with the illusion of the hair being down. The technique was all about getting a gorgeous, luxe finish to the hair. I wanted an effortless, flowy feeling—that when she walked, the hair bounced,”

The bride also included a photo of herself wearing a sleeveless white dress which she also wore in a video from her dressing room included in her newsletter. “I feel amazing. I’m so excited,” the singer stated in the video clip. “I’ve had this dress for so many years, and I’ve just been saving it, saving it, saving it, and now I’m wearing it on my wedding day.”

Lopez and Affleck had previously dated from mid-2002 to early 2004 but broke up under the pressure of intense media attention focused on their relationship. She would tell People magazine in 2016 that “I think different time, different thing, who knows what could’ve happened, but there was a genuine love there.” When the couple reunited last year, Lopez would tell People, “We’re older now, we’re smarter, we have more experience, we’re at different places in our lives, we have kids now, and we have to be very conscious of those things.”