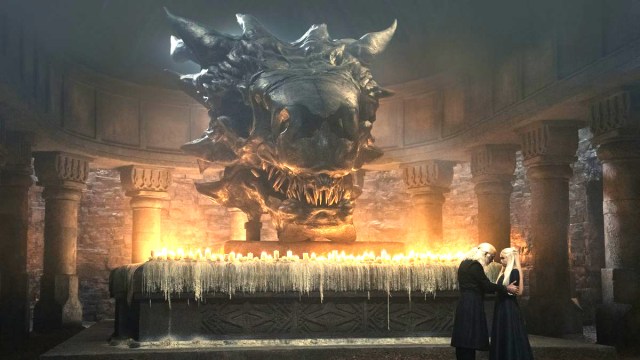 Warning: This article contains spoilers for House of the Dragon episode 10.

Foreshadowing is nothing new for House of the Dragon but, after the shocking conclusion of its first season, fans have noticed that everything may have been set up right from the very beginning.

House of the Dragon has now aired its finale and if you haven’t watched this episode yet. you’ll want to do so now as this article will dive into the events of episode 10. This is your final warning as there will be massive spoilers below.

Concluding the episode we saw young Lucarys Velaryon heading back from Storm’s End after a tension-filled confrontation with his cousin Aemond Targaryen. While flying home on dragonback Aemond catches Luke with his much larger dragon Vhagar and proceeds to taunt him.

Despite the taunting, neither cousin intended to hurt the other, but their dragons had a mind of their own. Arrax, the dragon of Lucerys, breathes fire at Vhagar despite commands to the contrary before being followed into the skies. Once above the storm clouds, Aemond is unable to stop Vhagar from following its instincts which results in both Arrax and Lucerys being chomped to death.

While shocking, King Viserys I might have just foreshadowed this very incident when speaking to Rhaenyra about the power of dragons in the first episode — long, long before either Aemond or Lucerys were even born.

This throwback is one of many in the House of the Dragon and Game of Thrones franchise, but given the impact, it might be one of the best.

If you’re looking to relive all of the action from season one before we finally get season two in a few years’ time all ten episodes can be streamed on HBO Max right now.