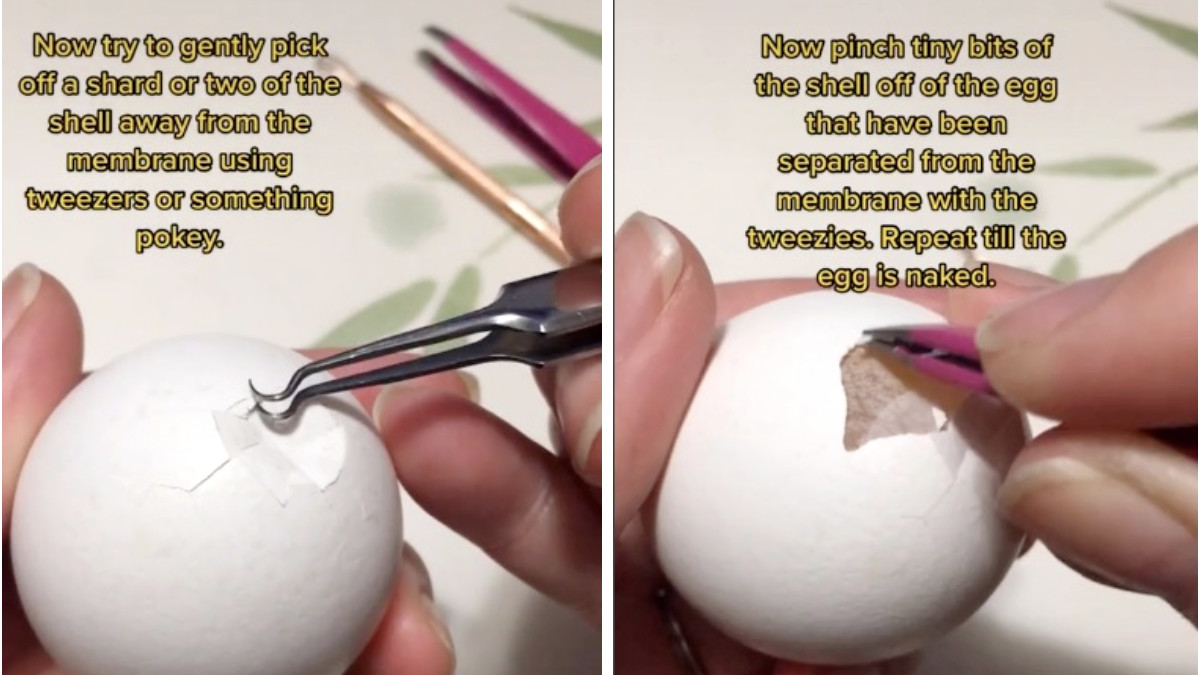 Anyone who has spent any time scrolling on TikTok lately may have noticed seemingly bizarre videos of what appears to be people slowly and methodically peeling raw eggs. Yes, raw eggs — this isn’t your mother’s egg salad we’re talking about.

So what’s the deal here? Has everyone just run out of things to do while hunkering down over the winter and avoiding Omicron? Well, let’s just say yes and no.

Where peeling raw eggs originated from

Interestingly enough, the practice of peeling raw eggs predates even TikTok, which only became available as a worldwide platform in 2018.

Doctors and dentists have been peeling raw eggs for years as a way to hone their surgical skills, using tools such as tweezers, toothpicks, and cuticle pushers. For the layperson, peeling away the outer eggshell without piercing the egg’s delicate membrane is an extremely difficult feat, and could take hours to do so successfully.

A skilled medical professional, on the other hand, can peel a raw egg much quicker. In the following Dec. 2016 video, a Chinese neurosurgeon peels a raw egg in just 10 minutes to help improve his patience and finger dexterity, which as the video points out, are crucial to his profession. “The tip is to use proper strength, then peel it bit by bit,” the clip helpfully explains.

Is that it? Why didn’t they tell us it was so easy?

Over the past couple of years, however, people online began peeling raw eggs as a challenge, which eventually made its way to TikTok — as these types of challenges are wont to do.

But again, why raw eggs?

Chalk it up to ASMR or the enduring popularity of pimple-popping videos, but there’s something oddly gratifying about watching people peel the shells off of raw eggs — even more so if the attempt is successful.

“It’s always satisfying to watch people peel things, but I think it’s more than that,” In The Know by Yahoo! culture reporter Kelsey Weekman told the New York Post earlier this week. “There was a period of time in which TikTokers were re-running old footage of a guy wrapping rubber bands around a watermelon until it split in half. I think we’re drawn to the tension and to see if people can pull stuff off with high stakes. I also know that this draws a solid live audience, and it’s much easier to make money off of a video when it’s live than when it’s just a typical TikTok post.”

Okay, then, let’s see some dang eggs getting peeled

At the time of this writing, there are currently over 15 million combined views under the TikTok hashtag #eggpeelchallenge. One of the more prolific accounts is Cynyo of The Sea (@itxhurts2know), who has tried the challenge with white eggs, brown eggs, quail eggs, and so on — though it seems like they have yet to successfully peel one.

Other TikTokers, however, such as user Thomas Salwasser, seem to have better luck.

Even Weekman herself admitted that the successful attempts seemed to be few and far between. “I dunno why so many people were trying to peel eggs live on TikTok this week but I’m glad someone finally pulled it off without breaking it,” she tweeted on Jan. 4, along with the following successful peeling.

Should you attempt to try the raw egg peeling challenge at home, however, be warned. You may not be able to make an omelet without breaking a few eggs, but it’s highly unlikely that you’ll be able to peel a raw egg without breaking a whole heck of a lot of eggs. And while the challenge itself may not directly put you in harm’s way, the reaction of anyone you cohabitate with might be, shall we say, less than ideal.