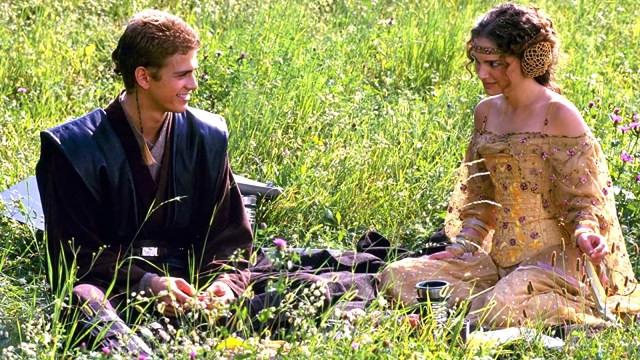 Some Star Wars fans are still pondering the attraction between Padmé Amidala and Anakin Skywalker that build to a fatal crescendo throughout the prequel trilogy.

In her roles as Intergalactic Senator and Queen of Naboo, Natalie Portman’s Padmé was an extraordinarily accomplished and mature young woman. Redditor Ayy-lmao was curious to hear from fans who ship her romance Hayden Christensen’s Anakin and Padmé’s romance about why they believe she would have been attracted to a Jedi several years her junior.

Redditor GirthwormGym referenced the Attack of the Clones novels, in which Padmé found Anakin authentically loving and sexually attractive.

Another Redditor suggested that superficial reasons sufficed to explain the slightly odd romance, pointing out that Christensen and Portman dated behind the scenes.

Beyondintodarkness proposed a thought experiment: imagining how the Force could be used in an intimate setting.

Nemarus, on the other hand, conceded that the holes in the film didn’t exist in the novels, explaining that on paper, Anakin was charismatic and bright.

SolutionsNotIdeology thought Padmé’s attraction to Anakin made perfect sense. They pointed out that the pair had a lot of common experiences to bond over. Neither of them had ever had a childhood, and circumstances thrust them both into positions where they had to meet the incessant demands of the adults around them.

While many fans believed that Padmé’s love for Anakin was best described in the novels, some felt there was still enough explored in live-action to make her feelings for the young knight believable.