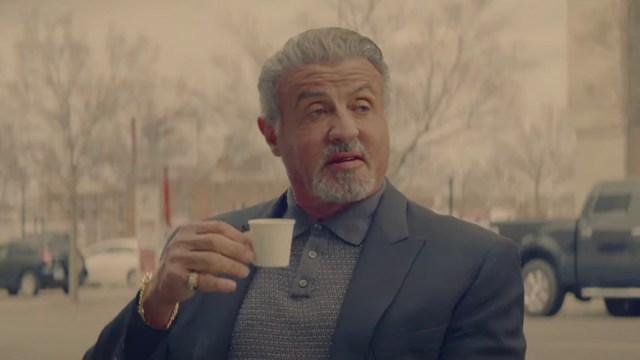 Sylvester Stallone is headed to Oklahoma in a thrilling new series from Yellowstone creator Taylor Sheridan. In Tulsa King, Stallone plays a mafia leader named Dwight Manfredi, and he’s fresh out of prison and ready to get back on top of his game.

The official trailer for the series was released this afternoon, and anxious viewers got their first look at the crime boss as he realizes that the only place that can give him a fresh start looks more like a long-forgotten farm town than the city streets he’s used to.

The synopsis for the Stallone-led drama reads as follows:

“New York mafia capo Dwight ‘The General’ Manfredi (Stallone) just after he is released from prison after 25 years and unceremoniously exiled by his boss to set up shop in Tulsa, Okla. Realizing that his mob family may not have his best interests in mind, Dwight slowly builds a ‘crew’ from a group of unlikely characters, helping establish a new criminal empire in a place that to him might as well be another planet.”

Of course, building a criminal empire in a desolate area might seem like a stretch at first; but it soon becomes clear that Stallone can pick the right crew members out of any town he comes upon. In building a team unlike anything he’s known before — he might just be able to lay down the path of his dreams and run the town with a family that will actually have his back.

The road to getting there will be full of twists, turns, and drama — this is a Taylor Sheridan production, after all. The trailer shows fans fire, explosions, brutal beatdowns, and snarky commentary — and we’ve only seen two minutes of the action so far.

Tulsa King begins streaming exclusively on Paramount Plus on Nov. 13, and you won’t want to miss it.