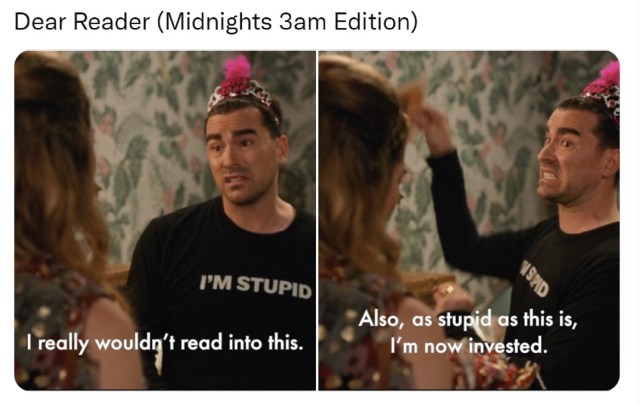 Taylor Swift can dominate social media just by snapping her fingers. All she has to do is say something or sing a lyric, and the world wants to make it into a meme. This Schitt has caught fire and it gets funnier the more fans get into it. When her latest studio album Midnights fittingly dropped at midnight on Oct. 21, it immediately became a Schitt’s Creek battle royale as posters paired the song titles with quotes from the show.

She’s already breaking Spotify records with the most streamed album in one day, let alone how many memes are flying around the universe. She didn’t just drop songs at midnight. She dropped seven more at 3 a.m., and the Schitt hit the fan.

Writing on her Instagram, “Surprise! I think of Midnights as a complete concept album, with those 13 songs forming a full picture of the intensities of that mystifying, mad hour. However! There were other songs we wrote on our journey to find that magic 13. I’m calling them 3am tracks. Lately I’ve been loving the feeling of sharing more of our creative process with you, like we do with From The Vault tracks. So it’s 3am and I’m giving them to you now.”

Her songs fit Schitt’s Creek scenes perfectly and fans are having a heyday with them. Now, she has fans singing, “I mean, I thought I was being mature. But in actuality, it was just a classic case of self-sabotage,” which fits with “Anti-Hero.”

They’re not really knowing, but thinking about, “You know those days where you’re just like, super in love? Not really.” from “You’re on Your Own, Kid.”

Schitt’s Creek memes and Taylor Swift together make a perfect team. Who knew?