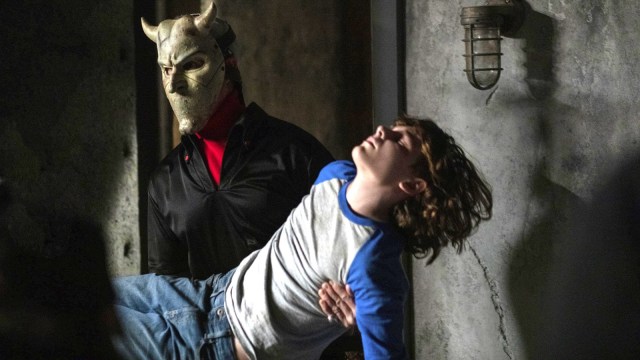 Scott Derrickson’s The Black Phone has smashed a box office milestone recently, after crossing $150 million. Based on the 2004 short story of the same name by Joe Hill, The Black Phone follows Mason Thames as Finney, a teenage boy who is abducted by a serial child kidnapper known as The Grabber.

Finney finds himself locked in a soundproof basement and must use a disconnected phone on the wall to communicate with The Grabber’s past victims and formulate an escape plan. Meanwhile, Finney’s sister, Gwen (Madeleine McGraw), suffers frequent nightmarish visions that depict her sibling’s kidnapping and imprisonment, which she uses to lead law enforcement to his captor.

Joining Thames and McGraw, Ethan Hawke (Sinister) portrays the Grabber, and Jeremy Davies, E. Roger Mitchell and James Ransone co-star in minor roles. Director Derrickson returns to his horror roots after successful outings with The Exorcism of Emily Rose (2005), The Day the Earth Stood Still (2008), Sinister (2012), and Deliver Us from Evil (2014). He celebrates The Black Phone hitting $150 million worldwide on Twitter, sharing an article from CNBC.

With a modest budget of $16–18 million, Derrickson turns lead to gold in his latest child abduction thriller, and critics called it an “entertaining, well-acted adaptation” that remains faithful to its source material. Hawke’s performance as The Grabber, in particular, caught the eye of critics everywhere.

The 51-year-old actor is still going strong, even after almost 40 years in the business. After making his film debut in the 1985 science-fiction feature Explorers, Hawke went on to star in the likes of Gattaca (1997), Before the Devil Knows You’re Dead (2007), and recently appeared in the Marvel television miniseries Moon Knight as Arthur Harrow.

In the future, Hawke is set to star in the sequel Glass Onion: A Knives Out Mystery, which is currently in post-production and scheduled for release in late 2022 on Netflix. As for Derrickson, the world is his oyster, especially after commercial success from The Black Phone; we can’t wait to see what other tricks he has up his sleeve.