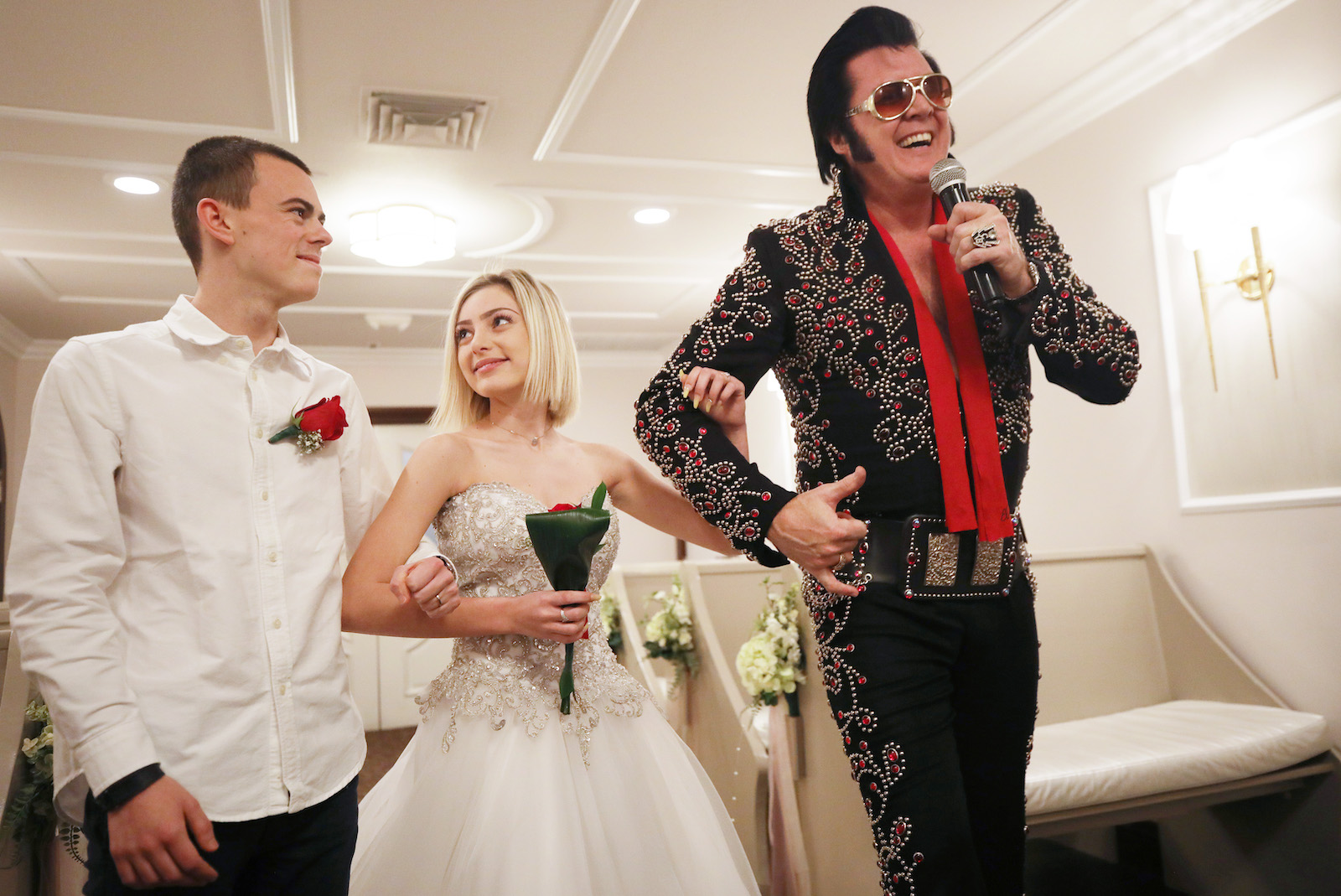 It might not be as patriotic as singing the national anthem, but having someone dress up like Elvis Presley and serenade (or officiate) your liquor- and energy drink-fueled 3 AM Vegas wedding ceremony is as American as baseball, apple pie, and tax evasion. But it may be going the way of the telephone booth thanks to a wave of new cease and desist letters.

Authentic Brands Group, the licensing company that controls the rights to The King of Rock and Roll’s image and name, sent out a series of cease-and-desist letters to multiple chapels in the Sin City area last month in an attempt to put a kibosh on the thousands, if not hundreds of thousands of “unlicensed” appearances by Presley’s numerous impersonators, who have acted as officiants and performers at the entertainment mecca’s many quickie wedding chapels since the actual King was still performing in the city in the late 1960s.

According to The Guardian, the letters halt the use of “Presley’s name, likeness, voice image, and other elements of Elvis Presley’s persona in advertisements, merchandise and otherwise,” as well as the use of the protected trademarks, “Elvis”, “Elvis Presley” and “The King of Rock and Roll.”

Jason Garon, one of the city’s most popular Presley impersonators, has performed over 600 weddings dressed as the King, replete in gold-rimmed sunglasses and an authentic 1955 pink Cadillac convertible. It’s his main way of making a living. “It would devastate me to have this stop,” Garon told The Las Vegas Review-Journal. “I wouldn’t know what to do if I couldn’t perform as Elvis for these couples. It’s at least 80 percent of my business as Elvis.”

Clark county clerk Lynn Goya told The Guardian the action could have significant effects on the city’s economy. “It might destroy a portion of our wedding industry,” Goya said. “A number of people might lose their livelihood.” Vegas Mayor Carolyn Goodman agreed, telling The Las Vegas Review-Journal that ABG’s actions were “an industry-devastating act.”

Goodman texted that “Our wedding industry has been struggling through the pandemic and the economic devastation it has caused. These obviously are not people or a company that give a hoot about this community or its people,” according to The Review-Journal.

In a statement reported by The Guardian, ABG wrote, “We are seeking to partner with each of these small businesses to ensure that their use of Elvis’ name, image, and likeness are officially licensed and authorized by the estate, so they can continue their operations.”

Garon has told The Review-Journal he has no plans to comply at this time, and is still booking weddings this week. “I got the best job in the world. We’re dealing with people on the happiest day of their lives. You’re doing something that they’ll never ever forget,” the performer said. “You can’t be sick. You can’t not show up. You gotta be there so people can remember that day for the rest of their lives. I got the best job in the world. I don’t want to lose it.”