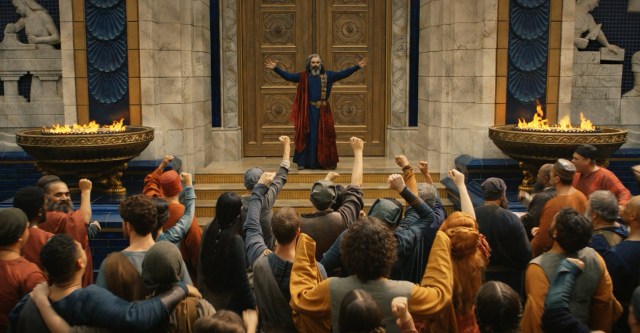 Warning: The following article contains spoilers for The Rings of Power episode 4, ‘The Great Wave’

The Lord of the Rings: The Rings of Power continues to place the narrative blocks that are undoubtedly building towards an epic climax, and in doing so takes one step closer to J.R.R. Tolkien’s history and lore. The fourth episode was a plot-heavy outing, so here’s a breakdown of everything that happened in linear order.

Episode 4 starts with Numenor’s queen regent, Miriel, having a vision of doom about her kingdom, with the White Tree of kings withering and great waves of the Sundering Seas crashing over Armenelos — the crown jewel of Numenor — and destroying everything in their path.

The queen holds an audience with Galadriel, who proposes that Numenor lend its strength to the Elves, so they can push back the Orcs swarming through the Southlands. Miriel refuses, but Galadriel pushes on by asking for an audience with the queen regent’s father, the rightful king. This enrages Miriel, who puts Galadriel behind bars.

Elsewhere, Arondir watches as the mysterious villain called Adar makes his way through the Orcs and embraces one of their wounded as he passes away. Adar appears to be an Elf, going by his pointy ears, and Arondir asks him why the servants of the Shadow call him “father,” but the Orc-commander doesn’t elaborate.

Ar-Pharazon, the Chancellor, walks through Armenelos and assures the population that Numenor will not kneel to the Elves, cutting quite the charismatic figure among commoners and guild members alike. The character doesn’t appear to have any sympathy for the Faithful, the Numenoreans who remain loyal to the will of the Valar and consider Elves as their friends. Pharazon may also have acquainted himself with the mysterious Halbrand, though it’s unclear whether a friendship will indeed blossom between them in the next episode or if the show simply hinted at such a development somewhere down the line.

Galadriel breaks out of her cell and makes her way to Miriel’s father, realizing that the king is too ill to be able to speak with her. Miriel then takes Galadriel to one of the Palantíri, the Seeing Stones, where she sees the vision of doom that would befall Numenor with her arrival. It is also there we get the first glimpse of Narsil, the future sword of King Elendil, which his son Isildur uses to cut off Sauron’s fingers. What’s more, it appears that the production team has modeled the sword after its cinematic counterpart in Peter Jackson’s trilogy, down to the leather band covering the hilt.

Over at Eregion, it seems that the Elves and Dwarves are making good time on Celebrimbor’s forge, but the legendary smith thinks they’re hiding something from him. Elrond makes his way to Khazad-dûm again and pries it out of his friend Durin, who reveals that they’re mining a new ore called Mithril. Durin swears Elrond to secrecy, which he accedes to on his father’s name, that of Eärendil the Mariner.

Adar gives Arondir a message to deliver to the fleeing people of Tirharad, telling them that they can swear fealty to him and continue to live in the Southlands. Bronwyn’s son, Theo, goes out to search for food but is hunted by Orcs who want the mysterious sword hilt he carries. Arondir comes to his rescue, and together with Bronwyn, they make their way to the watchtower. It is revealed that the town butcher, that old grisly guy from the first episode, is a servant of the Enemy, watching for his return.

Miriel escorts Galadriel to her ship, bound to Lindon to deliver her back to the Elves. But when the White Tree’s petals rain down in the city’s streets, the queen changes her mind and decides to help the Elven princess. She proclaims that everyone willing can join the armada setting sail for Middle-earth in ten days. Elendil and his son Isildur, the Faithful, are revealed to be among the volunteers.

And with that, the fourth episode of Amazon’s Rings of Power adaptation came to a close. As hard as it may be to believe, we’re already past the first half-season, with only four more outings left to conclude the story, or at least its first chapter.