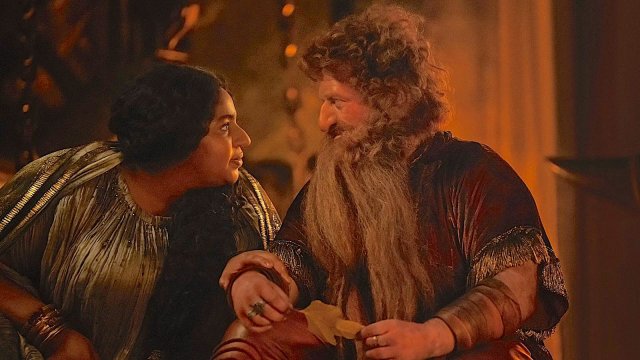 Owain Arthur’s Prince Durin IV is hands-down the best Rings of Power character so far, and his little subplot with Robert Aramayo’s Elrond might just be the only thing that redeems the show in the eyes of many fans. Yet, despite all of this acclaim, we’ve barely heard from Arthur in the press, so it was high time that the actor came forward and talked about the most important thing about Durin; his beard.

In a chat with Collider, Owain talked about all things Durin, and how he came to portray the prince of the Dwarven realm of Khazad-dûm. Now, if you’ve ever found yourself thinking that beard on Durin must be one hell of a prosthetic to sit around in for a full day, you’re right and then some.

“Oh, my God, let me tell you, that beard, particularly at lunchtime, takes control,” he said. “It dictates what I can and can’t do with lunch, that’s for sure. But you’re right. It was one of the tasks and hurdles that I had to overcome, to make us both one. There was a strange moment, when I first put the whole outfit on, because it happens in stages. When they put the nose on, I look like an old man. And then, when the wig goes on, I look like my mother. And the beard itself is in about 16 different pieces. It’s not until the very last piece is put on that the look is complete.

“It’s so meticulous and detailed, and a lot of thought and care has gone into the creating of Durin. It’s a pleasure and an honor to be able to experience that, but also a strange one because, looking at yourself in the mirror, it’s not you looking back at you. I don’t know if you’ve ever experienced that on Halloween. You move your face, and it’s almost like I’ve got the remote controls of this character and I can just move his body parts, but it’s certainly not me looking back.”

Almost 16 pieces just for the beard, huh? The Rings of Power production crew might be trying to make Peter Jackson’s team jealous, though we can’t really complain if they does indeed supplant the wigs seen on Gandalf and Gimli in those movies.

We’ll see even more of Durin — and possibly Elrond — when the show returns with its fifth episode this Friday.