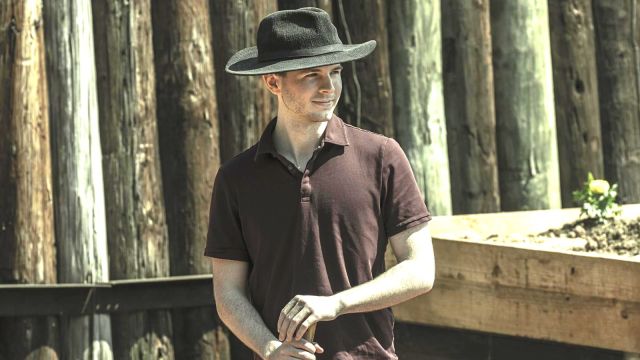 It seems like the dead really do be walking, and a cameo from The Walking Dead series finale proves it. Chandler Riggs, the show’s very own Carl Grimes, couldn’t miss out on the fun of shooting the beloved zombie series’s final act despite the character being killed off in 2018.

Riggs came back to the show not as Carl, but rather in an unassuming cameo as a Hilltopper farmer in the background of a scene between Lauren Cohan’s Maggie, Norman Reedus’ Daryl and Melissa McBride’s Carol.

The 23-year-old was in the area and heard about the show filming its very last episode. Naturally, having such a close personal history with The Walking Dead, Riggs wanted to be there to share it with his former cast and crew, he told Entertainment Weekly.

“I texted executive producer Denise Huth and was just like, “Hey, can you let me know the final day of filming? I’d love to be there for it. I’ll be in Georgia, and it’d be great to come by.” And so she sent me the dates, and I made the trek down to Senoia, Georgia.”

Huth surprised everyone with Riggs’ visit, in a moment the actor describes as “wholesome,” adding that it was great seeing everyone again.

When the need arose for extras in a scene, Riggs was in the right place at the right time. Director Greg Nicotero encouraged the show’s original cast member to join the scene, telling him “Hey, you. Take that, go stand in the back of that shot.” Riggs wore the clothes he had come with on the day, with only a hat as a disguise.

The main cast was asked to hide Riggs as best as they could, so his appearance wouldn’t stand out as much, but Reedus had other plans.

“They’re trying to hide him in the scene, and I kept trying to move my head like I’m looking at him to sort draw the audience’s attention to, ‘Hey, there’s Chandler over there!’ Which I don’t think anybody really wanted me to do, but I thought it was funny so I kept trying to do it,” he shared.

“They just tossed me back there, and I just did some hoeing in the ground in the background,” the actor said. Riggs joined The Walking Dead when he was only ten years old, then exited the show eight years later in season eight with a controversial death scene.

The first ten seasons of The Walking Dead are available to stream now on Netflix, as well as the first eight episodes of season eleven.