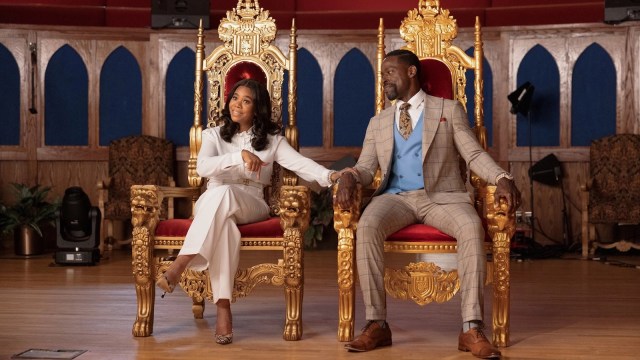 Sterling K. Brown and Regina Hall are taking us to church in the brand new — and very eccentric — trailer for the upcoming film, Honk For Jesus. Save Your Soul.

Jordan Peele and Adamma Ebo’s mockumentary stars the couple as disgraced church leaders gearing up for the most remarkable comeback of all time. Brown, as Pastor Lee-Curtis Childs, considers himself the G.O.A.T as far as megachurches go. Still, it doesn’t appear they’ll have a lively group of followers to sit back and watch it happen.

The couple, not discouraged — or at least not admitting it to themselves even if they are, look prim and proper, with painted-on smiles that look so big they almost hurt. That much smiling has got to hurt — right?

Trinitie Childs, played by Hall, narrates most of the trailer as she explains that she’s built different — as she must be — to take on the responsibility of being Childs’ wife.

“I just want to clarify some things before we get started — every woman is not built for the great responsibility of being the first lady.”

So what exactly is happening with these fake smiles and laughs, and why is a comeback even needed? We soon find out that Pastor Childs faced allegations of misconduct that he settled outside of court. Now, the focus of the pair and their church is to rebuild, rebuild, rebuild — at any cost. Childs is so convinced it’s all going to work that he hires a documentary crew to follow them on their rise to megachurch stardom once again.

Hall and Brown bring their charisma, charm, and ultimate likeability to the characters. Though we’ll likely be geared to root against them at the end of the day, we’re secretly hoping they’ll be at the top of their megachurch game again soon — Lee-Curtis in the pulpit and Trinitie on her stage.

You can see Honk for Jesus. Save Your Soul. in theaters and on Peacock on Sept. 2.