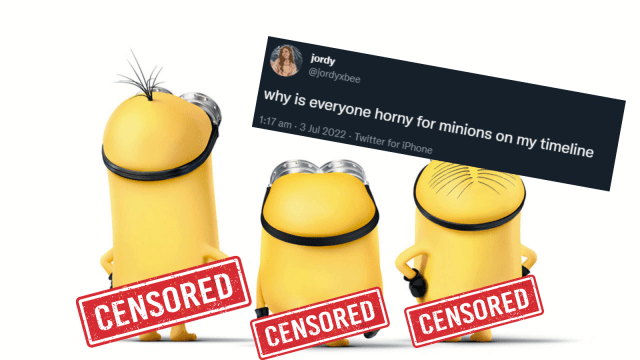 Every day we drift further and further from the light of a benevolent creator, and today we’ve been given proof that we’re beyond saving as a species as people thirst for Minions on Twitter.

In the year 2022, we’ve been given irrefutable proof that we as a civilization are doomed as the funny yellow tic-tacs that have dominated the screen for a decade are now old enough to be thirsted over… apparently.

You will want to take a cold, cold shower after reading some of these tweets. Or, a hot steamy bath if that’s what you’re into. Please note that the following tweets are regrettably NSFW.

Things started poorly with many thinking of shoving one up an orifice. Or saying if they were Gru, they would have done unspeakable actions.

Frankly, nobody knows what kicked this off or when this trend will die a fiery death. In truth, it feels like everything that has happened since March 2020 has been an elaborate social experiment to see what loneliness and isolation does to the human brain. We’re all in a Fallout-style Vault-Tec experiment, unfortunately.

Don’t worry parents, Minions is still fun for the whole family, just don’t check the IMDB parents guide which has seen internet mavericks fool around. Oh, and the yellow things could be responsible for war crimes.

Remember that The Office intro with the Minions? Yeah we’ll settle for blaming them. The blame game is strong.

Step aside Fifty Shades of Grey, it’s Minions‘ time to shine. Rise of Gru is currently in cinemas worldwide, with it taking the meme mantle from Sony’s flop-tacular release Morbius.