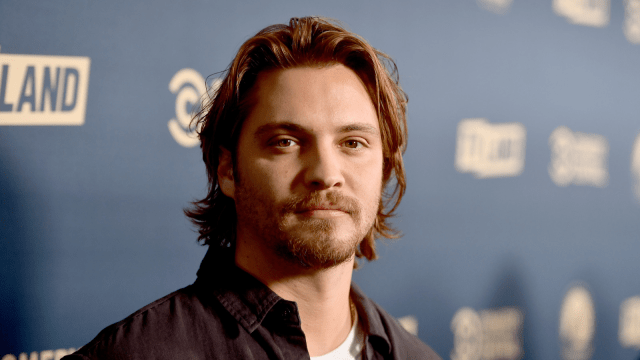 Not all superheroes wear capes; some of them wear tight jeans and a cowboy hat and go by the name Kayce Dutton. Kayce is one of the power players in Paramount’s #1 drama, Yellowstone, and he’s a character that’s as layered as the days on the Yellowstone-Dutton Ranch are long.

From losing his mother at a young age to a broken relationship with his father, John Dutton, due to choices he made with his now wife, Monica Long-Dutton, it feels like Kayce has several plates constantly spinning. If he moves too quickly one way, they’ll all come crashing down. That’s the price you pay when you take on the role of the hero, be it spoken or unspoken, and Kayce is the backbone of the entire Yellowstone Dutton Ranch. He’s the heartbeat of the series and the character we’ve never stopped rooting for.

Unlike most superheroes, Kayce doesn’t get to lay his cape down at night. In fact, when he takes off his cowboy hat at night, he keeps it close, ready to place it atop his head at a moment’s notice. He’s always prepared for battle, willing to take the next step forward and close in on the enemies that dare to threaten his beloved family.

Call him a hero or a knight in shining armor; Kayce is the man who you’d hope would show up at your door during a catastrophe or with a bottle of wine for a date night in. He can do it all, and boy, does he do it well.

In an ode to Kayce Dutton, here are some of his best leading man moments.

He makes a habit of fixing problems

If there’s a problem to fix, Kayce is the man for the job — and we’re not saying that ironically. He wears many hats, though the cowboy is the one we’re most partial to, and fixes broken things along the way. If someone is having a problem with their neighbor, Kayce is the one to answer the call. When someone is breaking and entering, Kayce will show up, ready to take on the bad guy.

In the scene above, Kayce went to handle a situation for a family friend, and from the moment he arrived, he knew it would be one of those days. It didn’t discourage Kayce from helping; on the contrary, it helped him realize how much his assistance was needed. While his methods are unconventional, they certainly get the point across.

When a person is willing to put it all on the line to help someone else, even when that means sacrificing their own peace and sanity, that is quite heroic in our book. Kayce might be exhausted at the end of the day, but his selflessness never goes unnoticed.

That conversation with Avery

While Monica is certainly not a fan of Kayce saying anything to Avery, there was a moment he shared with her that showed who he is as a man. It became more evident to him in their continued interaction that Avery was developing (or re-developing) feelings for him, even though he is married with a child. Avery’s feelings for Kayce are strong, and while we can’t blame her, they’re not the kind of feelings she should be harboring.

Kayce was trying to get the point across without being too stern, and the way he did it was a layered response. When Avery asked him if he believed in love at first sight, he said it was something he experienced with his wife, Monica. Avery said it was just her luck that it would happen that way because that’s how she felt when she first saw Kayce. With a look of thoughtfulness, he told her that it couldn’t be love because “God wouldn’t let you love something that can’t love you back.”

When Avery disagrees, Kayce looks at her for a moment, knowing that the words he’s saying to her cause her pain, and you can tell he wants to help her through it, but he also knows that his wife wouldn’t be on board with the extended hand of kindness.

In a sticky situation, Kayce remains faithful to his wife while trying to let Avery down easily. The “love triangle” of sorts isn’t something that slipped past fans, and while he’s a gentleman about the situation, we’re sure we’ll see more of it when season 5 rolls around.

Saving the day is nothing to Kayce

As we said before, Kayce is always willing to lend a helping hand, which happens more than you might initially think. It all goes back to all those hats Kayce wears and his many jobs, both at the ranch and in the surrounding area. He is not only someone who works with livestock, not just someone who understands the way of the land; Kayce is a man who understands people and the need for big love.

The video clip we shared above highlights some of Kayce’s best save-the-day moments, and they’re all so special. From getting a young girl home safely and taking out those who harmed her to helping people with issues on their ranch, Kayce is everyone’s greatest hero, and it’s a badge he wears with pride.

The only thing fans worry about with Kayce’s unbeatable strength and vigor is that he’ll need saving one day. With a spiritual quest in which he saw “the end of us,” fans know that season 5 won’t be an easy walk for Kayce. We’re all hoping that those he’s been so quick to help won’t hesitate to lend their hand to him, too.

Knowing it’s important to live for the moment

Kayce has witnessed a lot of loss in his life, and that’s not just regarding those closest to him. Being there when his mother passed away was undoubtedly an impactful piece of his childhood, and growing up on a ranch where the circle of life is constantly moving, he understands the value of time.

Few people understand the importance of a moment more than Kayce does, and when he explains that, he does it with the eloquence of someone who truly understands that it could all change tomorrow. When Kayce had a conversation with Monica about living for now

“There’s no such thing as forever baby. All we can do is live like there’s no tomorrow because one day, we’ll be right.”

When he takes his hat off to kiss his wife and truly shares that moment with her, he communicates with more than just his words. Being a Dutton means having a target on your back at all times, something Kayce, Monica, and Tate all understand on a very fundamental level. With life in a fragile state and so much love to give, there’s no way to experience everything than by taking Kayce’s advice and living like there’s no tomorrow.

Getting back to his roots

An essential Yellowstone experience for Kayce is returning to his roots with his family. In the clip provided from the Yellowstone YouTube, Grimes shares more about the way that Kayce and his family are healing, specifically himself and Monica.

Kayce spent his childhood growing up under the stars, enjoying time with his family and being out in nature. When it felt like his own family was falling apart and there was nowhere to go, he took them to the place that felt most like home to him: the great outdoors, with stars above their heads at night and nothing but tents and sleeping bags as shelter.

Stripping down to the basics allowed him to focus on what matters most, love and the moments he gets with those who mean the most to him. It takes a special type of man to sacrifice everything to give comfort, peace, and a sense of total focus to his family. It’s heroic, romantic, and, quite frankly, one of the most beautiful things a character has done in the series.

Embracing his role as a family man

Adding to the living for the moment idea, Kayce is also someone who embraces his role in the family in the most fundamental way. He knows his role as a father, son, brother, and man who helps ensure that everything on the ranch runs as smoothly as possible.

The fight the Duttons are up against isn’t just for their land; it’s for everything they stand for. It’s a fight for the right to their family name and the honor that comes along with it. Kayce knows that his father, while still the patriarch and still strong and devoted, is getting older. Kayce steps up in moments when his father needs help without him ever having to ask, providing them with a space in their relationship full of honesty and understanding.

Kayce loves his wife and son, and he knows that living life separately with them is crucial, but he also loves his father, the Dutton family, his siblings, and the ranch hands, who have become part of their lives. Juggling both lives certainly adds a lot to his plate, but it’s necessary right now. There are many sides to Kayce, and he does his best to honor all of them.

A knight in shining armor or a hero in wranglers, however, you look at it — Kayce Dutton fits the bill. Here’s to the unsung hero Yellowstone needed and the Dutton who stole our hearts from the very first episode.