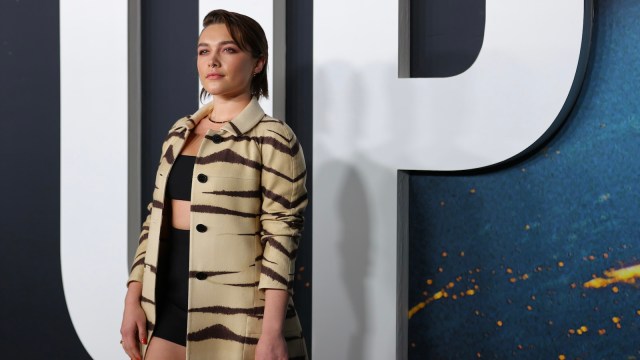 Florence Pugh has a lot to look forward to. Not only is she starring in the Olivia Wilde-directed thriller Don’t Worry Baby alongside Harry Styles, but she’ll also be appearing in next year’s star-studded Oscar bait, Oppenheimer. But that doesn’t mean she’s above a little nostalgia for the past, thankfully for us all.

Pugh recently shared a stunning Throwback Thursday post on her Instagram featuring photos from her 2021 Black Widow press junket in Paris, and it’s putting the “hot” back into hot pink.

The mini-photoset captioned “Pink memory lane was a blast” features the Hawkeye star in her temporary residence in the City of Lights, serving serious looks in the bathroom and on her balcony above the Paris rooftops. She’s wearing a breathtaking hot pink Versace minidress replete with matching platform shoes and an absolutely crushworthy smile. She even manages to match the flowers outside her balcony.

The look was put together by Pugh’s stylist at the time, Rebecca Corbin-Murray, with hair and makeup by Peter Lux and Valeria Ferreira, respectively. Lux is Pugh’s longtime hairstylist, and she often credits him in her social media posts.

The post was a fitting celebration of the anniversary of the release of Black Widow. While Pugh had already begun to step into the spotlight with critically-acclaimed performances in Little Women, Fighting with my Family, and Midsommar, Black Widow not only introduced Pugh’s Yelena Belova, aka Black Widow II, into the MCU, it also firmly established her movie star status. Not to mention her status as a very sassy fashion icon.

Now can we please get a Disney Plus miniseries that’s just Yelena and Kate Bishop shopping in Manhattan?