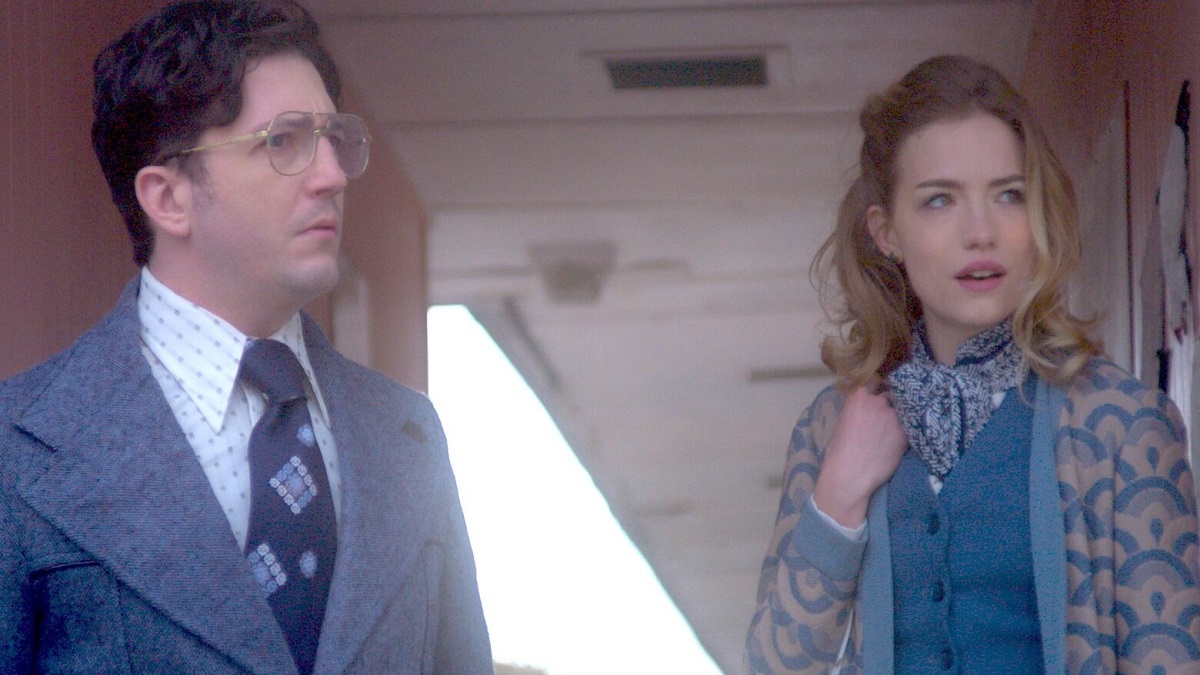 via Adventure Entertainment
Review of: Review: '18 ½' is an uneasy mix of intrigue and comedy

'18 ½' tries to toe the line between political intrigue and broad comedy, and while there's plenty of entertainment to be found, it can't quite pull it off.

The best political and spy thrillers are laced with intrigue, mystery, and suspense. The best comedies can often take heightened circumstances and keep upping the ante as the movie progresses. 18 ½ is an interesting combination of the two that sometimes succeeds, but still feels slightly hollow in the end.

The year is 1973, and White House transcriber Connie (Willa Fitzgerald) is meeting with a New York Times journalist because she’s come across something extraordinary: the titular missing length of time from the infamous Nixon tapes. She meets John Magaro’s journalist Paul in a diner, where she shares how she came across the tape at her day job, before the duo almost immediately find themselves discussing what to do next.

After some banter and back and forth, they decide to listen to the tape together at a nearby motel. As soon as they arrive at the Silver Sands Motel, though, it becomes clear that their attempts to get at the truth won’t be easy – in other words, hijinks ensue. There are strange encounters with the other inhabitants of the motel, which includes a hippie group that might be a cult, an overly-friendly couple who may or may not be swingers, and a well-meaning but talkative manager (a delightful Richard Kind). You never entirely trust any of them, but that’s precisely what keeps you engaged until throughout.

The premise makes it intriguing enough to stick around for, and while 18 ½ tries to blend conventions of both comedies and political thrillers, the former only lands occasionally. Take, for instance, the approach to the group of hippies at the hotel. Thankfully, it doesn’t fall into the usual trappings of making revolutionaries of the era either complete villains or odd outliers, but only barely.

The scene where hippies wax poetic about the evils of Wonder Bread and then proceed to “burn” it (like they did their draft cards and bras four years ago, get it?) is funny only because of how superficial it is. Without giving away too much, and to the film’s credit, the hippies do turn out to be sort of right by the end, but the whole shtick feels a little lazy.

What isn’t lazy, however, are the performances of most of the cast (including some great voice work by Bruce Campbell as Nixon), in particular the two leads. Fitzgerald and Magaro do a great job taking a tenuous connection between two strangers and playing it with all of the complexity and warmth possible. You see the chemistry between Connie and John grow from an uneasy alliance into a potential romantic connection. In the end, you want them to triumph together, even if it seems increasingly unlikely with every passing moment.

The other couple at the motel, played by Vondie Curtis-Hall and Catherine Curtin, put in similarly engaging turns, although they’re much more over-the-top, but that helps make the pair great foils for Connie and Paul. Where our central duo bring a genuine connection that’s brought on by extenuating circumstances, this couple brings a disarming charm and overtly warm disposition that feels like it can curdle at any minute. It’s great work from both Curtis-Hall and Curtin, who chew up every scene they’re in, making every minute of their screentime count.

Overall, 18 ½ is an engaging watch, albeit one that doesn’t know which tone it wants to lead with. The mix of comedy and intrigue gets muddled, and doesn’t completely work most of the time. At its best, the movie takes the mystery and dread of political thrillers and runs with it all the way to the end. Sometimes the comedy comes along, too, but only sparingly and semi-effectively. You can’t help but admire the ambition on display, even if it ultimately falls just a little short.

Review: '18 ½' is an uneasy mix of intrigue and comedy

'18 ½' tries to toe the line between political intrigue and broad comedy, and while there's plenty of entertainment to be found, it can't quite pull it off.