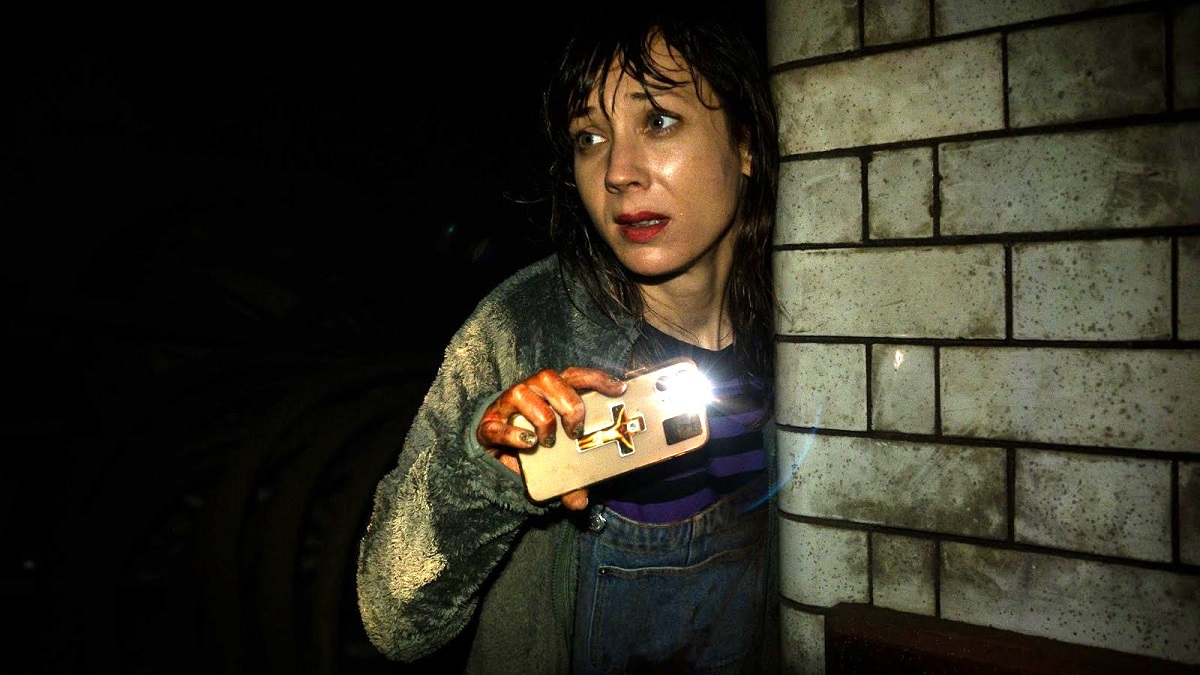 via Momentum Pictures
Review of: Review: 'DASHCAM' is a found footage horror much easier to like than its protagonist

Found footage horror 'DASHCAM' may have a relentlessly unlikable protagonist, but it still delivers a breezy exercise in unhinged demonic terror.

Rob Savage inadvertently put himself in a difficult position when it came to following up 2020’s horror sensation Host, which became one of the pandemic era’s first word-of-mouth success stories on its way to landing a perfect 100 percent score on Rotten Tomatoes, while it was also labeled as the scariest movie ever made by no less of an authority than science itself.

In a move that was equal parts sensible and brave, the filmmaker has returned with another found footage effort that uses the age of COVID as the backdrop to another night of unimaginable terror. DASHCAM, which releases this coming Friday, is very much a deliberate companion piece to Host, with one key difference. Whereas the latter was a tale of the terrors that unfold when everyone has been trapped inside by the coronavirus crisis, the former is the result of how badly things can go wrong now that the world has been allowed to open back up.

Taking place in a heightened version of the real world, musician Annie Hardy plays a fictionalized version of herself, who also hosts the improvised music show Band Car, where she belts out off-the-cuff songs pitched to her by fans during livestreams. Bored with being locked down in Los Angeles, she makes an impromptu journey across the Atlantic to reconnect with Amer Chadha-Patel’s former bandmate Stretch, but his live-in partner isn’t best pleased to have a brash American gatecrash their isolation.

After getting on the couple’s bad side almost immediately, she steals Stretch’s car and decides to earn some extra cash by fulfilling his obligations as a food delivery driver. One stop later, she’s offered an even larger sum to transport Angela Enahoro’s frail elderly woman to safety, which is when things take a relentless turn for the worse, throwing the out-of-her-depth tourist into the middle of a violent, deranged, and terrifying demonic conspiracy.

It’s a neat setup, but the biggest problem a lot of people are going to have with DASHCAM is Annie herself. While the character is deliberately intended to be outgoing to the point of outright irritation, it’s incredibly (and very regularly) difficult to find yourself sympathizing with an obnoxious, COVID-denying, MAGA-supporting, anti-mask loudmouth that’s essentially the manifestation of a certain online point of view that grew louder and louder throughout 2020 and 2021, to the extent you’ll occasionally be hoping that the things going bump in the night end up scoring a swift and decisive victory.

That’s not to say it’s a bad performance on Hardy’s part, when her heavily-improvised reactions and creatively-worded insults are genuinely inspired at points, but a lot of DASHCAM‘s potential dramatic tension and emotional investment is undercut by having the lead in a tightly-wound exercise in terror being nothing more than, to put it a touch bluntly, an overbearing asshole.

That being said, once you’ve become acclimatized to Hardy’s shtick (by which point you’ll know if you’re in or out), DASHCAM becomes an unhinged treat from the second the sh*t both figuratively and literally hits the fan. Old Angela might look to be a helpless old woman prone to soiling herself in the most inopportune moments, but it turns out there’s a very valid reason why her mask has been secured firmly in place.

Those with motion sickness need not apply, though, with the entirety of the film shot on iPhones to both ratchet up the realism, and cleverly overcompensate for any budgetary issues that may arise through an impressively ambitious array of fast-paced foot chases, car crashes, expelled entrails, flailing mandibles, and horrifying creatures. At times it’s close to impossible to follow what’s going on, and while that’s admittedly the point, this particular form of whiplash guerrilla filmmaking isn’t for everyone.

It would be both lazy and a disservice towards DASHCAM to simply label it as “The Blair Witch Project for Gen Z”, but that’s exactly what it can be boiled down to in the very broadest of strokes. However, Savage’s latest has one thing that the seminal 1999 godfather of found footage horror didn’t have; and that’s a wicked streak of acerbic black humour that punctuates virtually every frame, whether it’s coming out of Annie’s mouth, or being dropped in the comments by the engrossed audience of livestream viewers.

At a brisk 77 minutes (over 10 of which are dedicated to an inspired credits sequence that you absolutely must stick around for), DASHCAM doesn’t have the time to waste on any exposition. There’s a mythology in place, but Savage never feels the need to stop and spell out why these things are happening. Too many horror titles get bogged down in over-explaining themselves, but there simply isn’t time for us to even question the who, what, when, where, and why of how Annie unwittingly ended up with a possessed pensioner in her charge, never mind one who has an Ariana Grande tattoo just above her hip, and makes it her mission to turn anyone who gets in her way into nothing more than a smeared pulp of bloody matter.

Things never slow down from the beginning of the second act to the final frame, with DASHCAM hurtling from desolate highways to murky forests, by way of an abandoned amusement park and a climax in an eerie abandoned house, with each set piece freshened up by the change of scenery, throwing plenty of unexpected developments and heart-in-mouth jump scares into Annie’s path at every turn. It’s a lot to take in, but Savage wants you to strap in, buckle up, go along for the ride and ask questions later, which it almost certainly will given that the movie is destined to go down as one of the year’s most talked-about horrors, for better or worse.

Once again, the director and his co-writers Gemma Hurley and Jed Shepherd have made the absolute most of the minimal tools at their disposal, wringing a surprisingly robust hybrid of intense chase thriller, splatter film, and absurdist horror comedy out of a shoestring budget. However, DASHCAM is a lot more uneven than Host despite the superior production values, but they do combine to form what might end up going down in the history books as pandemic horror’s premiere double-feature.

Review: 'DASHCAM' is a found footage horror much easier to like than its protagonist

Found footage horror 'DASHCAM' may have a relentlessly unlikable protagonist, but it still delivers a breezy exercise in unhinged demonic terror.