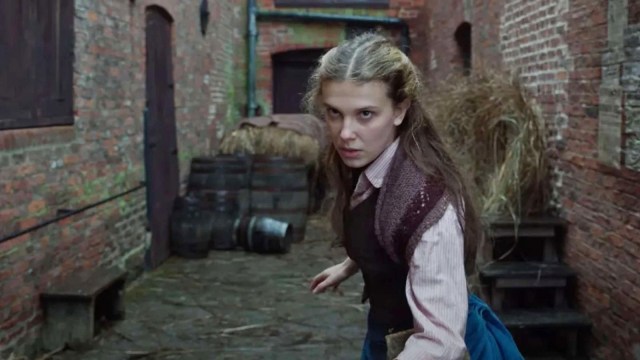 Image via Netflix
Review of: Review: 'Enola Holmes 2' expands into franchise territory with an accomplished new entry in the cannon.

This plucky sequel is carried on the slender shoulders of Millie Bobby Brown, who proves once and for all that she has the talent to bring in some box office. She might be a Netflix sensation, but always looks supremely comfortable on camera carving out another entry in this engaging franchise wannabe.

From Christopher Lee to Basil Rathbone, Sherlock Holmes has always been synonymous with deductive reasoning and iconic deerstalkers. That is until Enola Holmes joined him, springing from the mind of author Nancy Springer. What followed in quick succession was a modicum of precocious talent, one Netflix phenomenon, and Millie Bobby Brown.

As this English actor slowly eclipsed her contemporaries in Stranger Things, first media outlets paid attention, and then Hollywood. Other opportunities quickly followed, not least of which was the title role in Enola Holmes alongside Henry Cavill. Written by Jack Thorne (His Dark Materials) and featuring Helena Bonham Carter, this adventurous romp around Victorian London confirmed her star power and a sequel was inevitable.

Cut to 2022 and Enola Holmes 2, which sees this charismatic creation take center stage and open her own detective agency, where social expectations, gender politics, and a famous big brother almost put paid to this new endeavor in a matter of minutes. That is until a little girl approaches Enola to track down her missing sister and the game is afoot.

What made the first film work comes down to a number of unique factors. As an actor, Brown is supremely versatile, innately gifted, and has a talent for breaking that all-important fourth wall. By surreptitiously inviting audiences into this world, she makes an instant connection without seeming to break a sweat. A subtle glance here, an exasperated expression there, and in no time at all audiences are invested.

This time around, David Thewlis (The Sandman) is heading up the police force as Grail, a shifty authority figure with nefarious intentions. Audible from a distance, due to his distinctive walking stick, this Victorian peacekeeper plays a shadowy part in proceedings from the off — making life difficult for both members of the Holmes clan.

With a plot that whips by at a fair clip and Brown on solid form, there is simply nothing not to enjoy about Enola Holmes 2. As the erstwhile sibling Sherlock, Cavill fulfills his tag team responsibilities, imbuing their relationship with a distinctive big brother vibe. Either emerging from a public house four sheets to the wind or deducing crucial clues alongside Enola, this charismatic pairing makes for two bundles of fun.

However, there are some gripes which come with a plot that moves at supersonic speed, centering almost solely on its plucky heroine. Minor players who may have gotten a larger role last time around, find their contributions diminished for the sake of brevity. Casualties include Louis Partridge as Lord Tewkesbury, who may serve as Enola’s love interest, but rarely gets to break out beyond those boundaries.

Elsewhere, there is the issue of Bonham Carter as inventive anarchist Eudoria Holmes, who is only afforded a few fleeting moments of screentime. Whether this is intentional or down to scheduling conflicts, her involvement feels like an afterthought rather than a top-down creative choice. On the flip side, what the actress does get to do is expand on the maternal bond she established in the first film, as well as add some solid performances elsewhere.

Beyond that, Enola Holmes 2 brings everything to the table which made it work last time. Some polished production design from Michael Carlin (The Mauritanian) breathes life into a vibrant Victorian London, while Emmy award-winning director Harry Bradbeer (Fleabag) delivers a degree of self-assurance behind the camera. Combine that with Thorne back on adaptation duties, shaping an undemanding but engaging tale from Springer’s source material, and audiences are definitely onto a winner.

With the star power of Brown confirmed and a third entry in this female-led franchise a certainty, Enola Holmes is turning into a force to be reckoned with. It delivers a new type of hero to the streaming generation, keen for role models who excel in being resourceful against all odds, thus making this sequel about much more than just plucky heroines, nefarious authority figures, and literary icons.

Beneath the polish, poise, and fourth-wall-breaking punchlines, there is something reassuring about what this Victorian tale has to say about storytelling. Whether filmmakers are addressing the trials and tribulations of 221b Baker Street, or tackling something closer to reality with a dramatic look at fractured friendships in The Banshees of Inisherin, cinema still has a lot left to say.

Review: 'Enola Holmes 2' expands into franchise territory with an accomplished new entry in the cannon.

This plucky sequel is carried on the slender shoulders of Millie Bobby Brown, who proves once and for all that she has the talent to bring in some box office. She might be a Netflix sensation, but always looks supremely comfortable on camera carving out another entry in this engaging franchise wannabe.