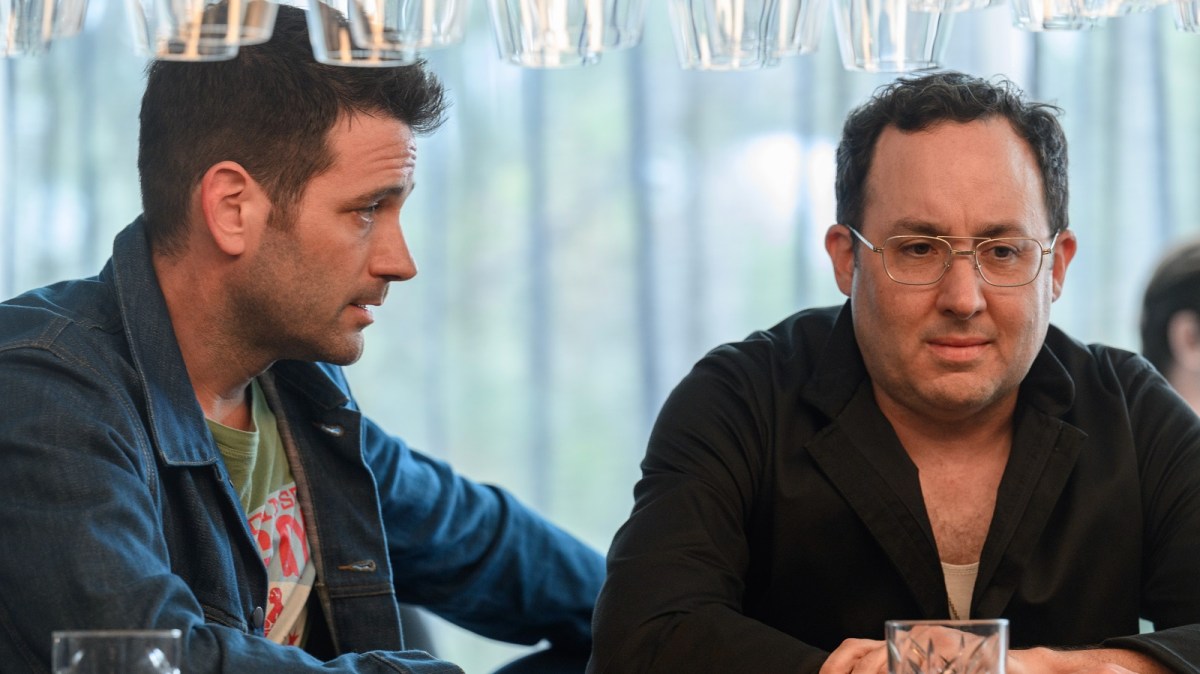 Peacock’s Irreverent opens with Mack (Colin Donnell) in a tight spot, running from Chicago gangsters. With millions ticked in a carry-on bag, he sets off as far from civilization as Quantas will carry him, looking to kill 24 hours in peace until Mackenzie Boyd (P.J. Byrne) arrives.

After a day in the air, this replacement pastor for the outback town of Clump promptly steals his money and disappears off down the Gold Coast. Left with an ill-fitting hassock, a fraudulent identity, and Mackenzie’s luggage, the hunted man must make do and mend in a town still doing the internet on dial-up. Not only introducing audiences to a clued-up community of eccentric individuals in the process, but offering up one of the most disarming slices of television in years.

What showrunner Paddy Macrae has created here amounts to a fish out of water scenario, coupled with culture clash cliches. Having made a grand entrance by taking out the town power lines, Mack is consumed with tracking down Mackenzie and little else. Local law enforcement officer Piper (Kylie Bracknell) is instantly suspicious, while Peter (Wayne Blair) is the local welcoming committee more concerned with making this reverend feel at home.

With sun-kissed beaches, basic amenities, and an internet connection housed on a rickshaw requiring its own generator and extension cable, Mack is soon losing his mind. What keeps Irreverent so consistently engaging comes down to a gifted ensemble, who seem to have stepped right out of a Taika Waititi production. Much of their humor comes through interactions, tonal inflections and laid-back reactions in times of crisis – it also helps that the new resident is from another cultural plain.

Gone is the instant access to everything through cyberspace, only for it to be replaced with township traditions and suspicious locals. With subplots involving tobacco smuggling, wedding receptions, and inept criminals maintaining their territory – Irreverent has much more than just a mistaken identity to keep audiences interested.

There is a charming Hunt for the Wilderpeople vibe which permeates the comedic crime caper, revealing these locals to be not only savvy in their own way, but worldly wise in ways which urbanites like Mack might overlook. Aside from the signposted life lessons stereotype, which will inevitably change this criminal into a kind-hearted soul, there is also something else which should remind audiences of a simpler time.

As much as this born and bred Chicago native craves communication super highways – the enforced isolation makes him re-evaluate everything he considers important. There might be times when his savvy criminal background and keen fighting skills make him a hero for these people, but in turn their influence on him to curb those baser instincts is what provides Irreverent with its depth.

Whether he is slowly winning the respect of police officer Piper through random acts of compassion, or saving a wedding reception from ruin, Mack slowly begins to value his situation more and more. Even when Mackenzie is aiding his subterfuge via an earpiece in the middle of a Zumba class, audiences are unlikely to feel anything other than empathy for this fraudulent pastor.

That is the trick this Peacock original consistently pulls off, as episodes seamlessly meld together, while these two actors create their own unique double act. The former is so upbeat and invigorated by his new found freedom, that he never believes anything is amiss. That old school comedy vibe comes from the pent-up frustrations of his counterpart, as this erstwhile man of the cloth burns through his cash and makes merry with no fear of retribution.

Combine that with the culture clash elements of Clump, which constantly keep Mack guessing, and Peacock might find itself onto something special. Worthy of every watch-list across America, if only to experience something truly unique in entertainment terms, Irreverent promises to deliver much more than the sum of its parts in pathos. Should there be any naysayers out there who dare to disagree during this historical time of cultural inclusivity, might we suggest something a little Irreverent in that you get with the program.

Review: 'Irreverent' proves there is more to Colin Donnell than Arrow might suggest

Combining a little midlife crisis with some mild religious sacrilege, this mistaken identity dramedy from Peacock proves to more than a little 'Irreverent.'