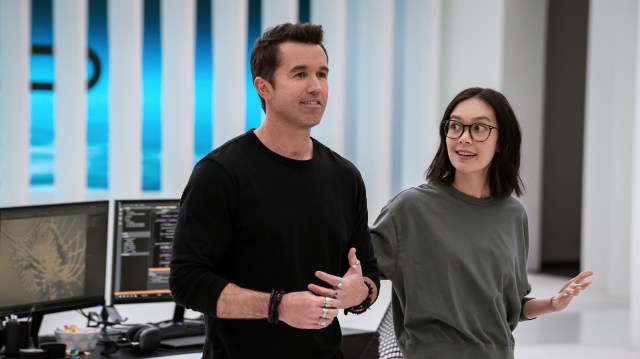 Image via Apple
Review of: Review: Season 3 of 'Mythic Quest' will feel like a homecoming for fans

Season 3 of 'Mythic Quest' never attempts to reinvent the wheel, but instead lets these characters do what they do best - be uber geeks. With some slick dialogue and effortless onscreen chemistry, there is no reason to rule out another go-round.

Where is there left to go after every expansion pack has been added on, every side mission explored, and countless cyber trinkets horded – except somewhere new? These and other issues challenge tech boffins Ian (Rob McElhenney) and Poppy (Charlotte Nicdao), as Mythic Quest returns for a third season on Apple.

Written once again by series regulars Ashly Burch (Rachel) and David Hornsby (David) alongside McElhenney – Mythic Quest remains a gem in the Apple crown. Following the season two finale, which saw visionary founder Ian leave with Poppy, Brad (Danny Pudi) sacrifice himself for the sake of Jo (Jessie Ennis), and David step up to take over – Mythic Quest HQ is in ruins.

What becomes abundantly clear is that season three has lost none of its edge. Chemistry between Ian and Poppy remains as strong as ever, even if these two visionaries clash over the direction that their new company Grimpop needs to go. In a neat piece of cross-cutting, Brad is reintroduced during his parole hearing, allegiances between David and Jo are re-established, while Ian and Poppy pitch their new game Hera.

Visual invention is also abundant throughout this revamped third outing, as Ian allows his ego to dictate their 2001: A Space Odyssey interior design. Smooth lines, perfect curves and no discernible edges give their new offices a retro-futuristic vibe. Meanwhile, Rachel and Dana have thrown in the towel at Mythic Quest, only to discover their dream to become programmers has hit an obstacle. However, unperturbed by this educational roadblock, both find themselves back on home turf – even if two newbies might have taken over the testing.

For the next three episodes, Carol (Naomi Ekperigin) and David bicker, Brad plays it cool having been hired back as a janitor, while Jo takes her role as David’s personal assistant a little too far. In terms of plot progression, this third season appears to be treading water, while relying on the ensemble cast to elevate things through their combined onscreen chemistry. Nonetheless, Ian embracing his visionary side through virtual reality gets boring quickly, while Dana’s programming subplot feels like filler rather than plot progression.

That being said, this talented cast is enough to keep things interesting even if the comedy rarely feels inspired. McElhenney and Nicdao can almost play these characters in their sleep by now, getting beneath the skin of both people effortlessly. Despite the broad archetypes of socially awkward uber geek and overly confident hipster wunderkind, which personify Poppy and Ian, both avoid evolving into caricatures.

Similarly, David and Jo make for a solid pairing, as her need to dominant plays well against his inherent lack of authority. What also continues to add value is the presence of Pudi’s Brad, who skates a thin line between transparent self-interest and abject cunning. However, as he begins to gain the confidence of Carol, who feels undervalued and overpaid, power dynamics within Mythic Quest shift.

From that point on, this series moves away from the visionaries downstairs to focus on the underhanded upheaval happening under David’s nose. That plot progression aside, audiences will return to season three not because they expect great things outside of these central relationships. They will come back because these characters feel familiar, are awkwardly endearing, and also unintentionally comedic.

Ian and Poppy represent extreme opposites which everyone can relate to in some way. He is a combination of preening arrogance, inspired creativity and understated validation issues. Whereas his partner in crime is happiest creating a world from programming languages, as outside in the real world social conventions are so much hardly to handle.

Every character within Mythic Quest has an element of this in their genetic makeup, which makes them instantly relatable and somehow reassuring as a result. That is where the success of this series really lays, as people are inherently insecure, crave reassurance and often cloak that with over-confidence. This is ultimately why the plot in this show matters less than the characters who exist within it.

Mythic Quest is not out to make some complex psychological point or reinvent the dramatic wheel, but instead seeks to engage audiences by offering up a show populated by people who exhibit all too human flaws. Which is why season three just lets Ian, Poppy and everyone else do their thing – surely that is entertaining enough.

Review: Season 3 of 'Mythic Quest' will feel like a homecoming for fans

Season 3 of 'Mythic Quest' never attempts to reinvent the wheel, but instead lets these characters do what they do best - be uber geeks. With some slick dialogue and effortless onscreen chemistry, there is no reason to rule out another go-round.