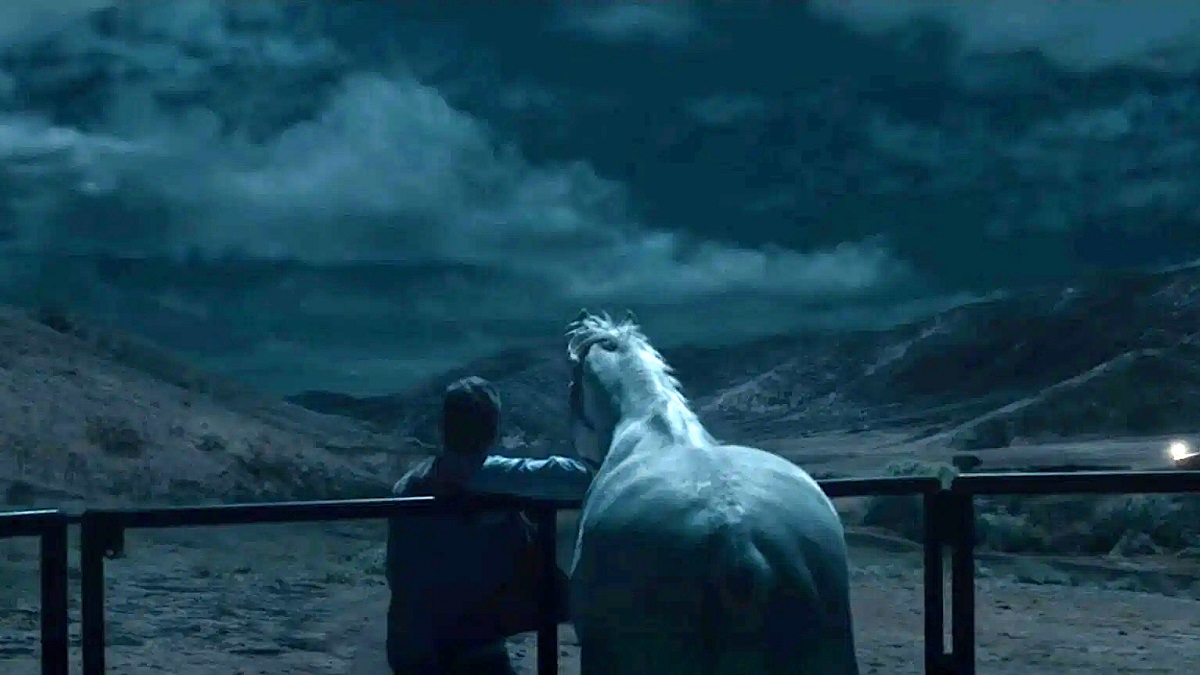 via Universal
Review of: Review: 'NOPE' is an ambitious, awe-inducing nightmare

Jordan Peele mixes and matches elements taken from big blockbusters and obscure subgenres alike to create a heart-racing nightmare that rains abominable filth down on its audience.

“What’s a bad miracle?” OJ Haywood (Daniel Kaluuya) asks his sister Emerald (Keke Palmer) early on in NOPE. The ambitious and breathtaking third movie from Jordan Peele asks this question, and many more. It is a frenzied and brutal examination of spectacle, how we process the world, historical erasure, and the futility of challenging forces beyond our comprehension, and that’s barely scratching the surface.

NOPE opens with a cryptic excerpt from the Bible, setting the tone and scale for everything to follow: “I will cast abominable filth upon you, Make you vile, And make you a spectacle. — Nahum 3:6.” With an opening like that, the brutality and awe-inducing imagery of the next two hours and then some are to be expected, and yet it’s still staggering to watch. Peele is not here to pull punches, and we should all prepare accordingly.

There’s immediate cruelty as we witness a chimp attack on a TV show set, then the death of the Haywood siblings’ father (Keith David, criminally underused), before we catch up with OJ and Emerald six months after. OJ is working hard to fill his father’s shoes, and keep the family business – Haywood’s Hollywood Horses – afloat.

After all, they are the descendants of the first Black movie star – specifically the jockey in Eadweard Muybridge’s Animal Locomotion, the first example of a motion picture. In reality, we don’t know who the jockey was, but Peele uses this fact-meets-fiction device to underscore how Black people and their history have been erased. Emerald is eager to reclaim this history, putting herself out there as a Jill-of-all-trades, as she and the more soft-spoken OJ attempt to get a commercial gig for their company.

It doesn’t work out, and the siblings are forced to sell horses to the tourist-trap ranch next door, Jupiter’s Claim. It’s owned by Ricky “Jupe” Park (Steven Yeun, incredible), a former child actor who reached notoriety for his role in a movie called Kid Sherriff and involvement in the “Gordy’s Home Incident,” which we saw a snippet of at the beginning of the movie.

The siblings head back to their ranch and discover a UFO (or UAP) that can mess with electricity, rain down inorganic matter, and suck most anything into its gaping maw. They decide to try and get “The Oprah Shot” of the spacecraft, to prove their story (and save them from financial ruin).

From here on out, NOPE refuses to slow down, taking no prisoners as it barrels forward and gifts us with some of the most terrifying imagery you’ll see onscreen this year. From the alien craft, which perfectly nails the sheer scale and terror of coming into contact with the unknown (and then one-ups itself as the movie progresses), to Ricky’s full recollection of the “Gordy’s Home Incident,” we are not denied spectacle for a moment, but we are also made painfully aware of the cost. We have no choice but to sit and let the abominable filth rain down.

Nestled in the grime and horrible spectacle of it all are big ideas Peele probes (alien pun possibly intended). One of the biggest ideas at play is the compartmentalization of trauma through a screen and profitability. The Haywood siblings eventually assemble a crew to get their “Oprah Shot,” comprised of themselves, an eccentric cinematographer (Michael Wincott, glorious), and a Fry’s Electronics employee and UFO enthusiast (Brandon Perea, delightful).

Their plan to capture the spacecraft on tape is the only way they can conceptualize interacting with this horrifying, otherworldly entity. In this way, the trauma of seeing reality-breaking horror can at least be compartmentalized into footage, and profitable footage at that. Similarly, when trying to recount his experience of the “Gordy’s Home Incident,” to Emerald, Ricky has to filter it through a description of a Saturday Night Live sketch. He’s set up a whole secret room in his office full of memorabilia from the show, which he usually charges people to see, he tells the Haywoods. When we see just how horrific the incident was, we can understand why Ricky can’t access this memory directly.

NOPE doesn’t offer any reassuring or easy answers about the gauntlet it throws down, and while that is one of the elements of film’s strongest suits (what’s scarier than the unknowable?), it also results in some of the story’s weaker points. Specifically, the lack of character development for our heroes.

While the whole cast is phenomenal, there is a missing piece here. Kaluuya’s strong and silent performance is perfect, part reclamation of the Black cowboy and part deadpan foil to Palmer’s bold and brash Emerald (there’s humor among the horror, thankfully). However, seeing more of OJ and Emerald’s inner lives in the way we do Ricky’s would have undoubtedly strengthened the narrative – and even then, we only get a brief glimpse. As presented, they are compelling characters that could (and should) have been filled in just a bit more.

Overall, though, Peele has done something truly staggering here. He’s taken elements from some of the biggest blockbusters of the past 50 years like Close Encounters of the Third Kind, while nodding to genres like Black Westerns and Italian Giallo to create an heart-racing nightmare. For extra shock and awe, see it on an IMAX screen, and let everything NOPE has to offer wash over you.

Jordan Peele mixes and matches elements taken from big blockbusters and obscure subgenres alike to create a heart-racing nightmare that rains abominable filth down on its audience.