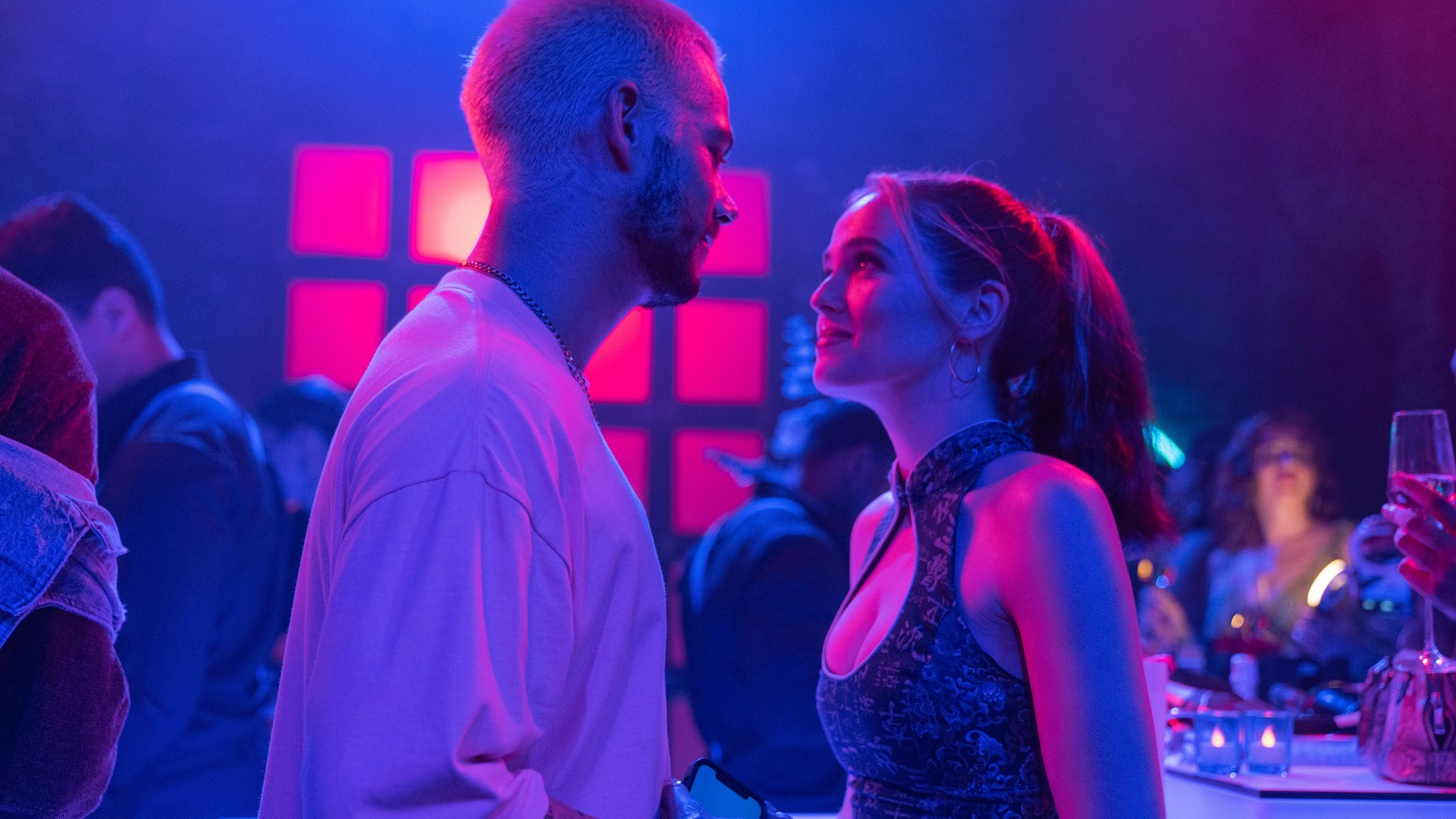 via Hulu
Review of: Review: 'Not Okay' drives a razor-sharp stake through the heart of influencer culture

Writer and director Quinn Shephard's 'Not Okay' takes thing near to the knuckle, but the biting jet-black comedy never loses sight of its intentions, deftly balancing humor and bile with heart and hard-hitting themes.

Writer and director Quinn Shephard’s second feature Not Okay opens with a disclaimer warning viewers that the movie is set to feature “flashing lights, themes of trauma, and an unlikable female protagonist”. While it could instantly be waved away as a cute trick to kick off the story, we’re in no doubt as to where we stand by the end of the very first scene.

Zoey Deutch’s photo editor Danni Sanders is desperate to become a writer for her online magazine Depravity, but her editor doesn’t think she’s got what it takes. It’s a fairly standard rejection scene on paper, but Danni’s editor chastising her for submitting a piece based around her FOMO for being out of the country during 9/11 (and missing out on the generation trauma that came with it) makes it abundantly clear that Not Okay isn’t going to be pulling any punches.

With the stage neatly set for what’s to come, the story edges increasingly closer to the bone as the main drag of the narrative gets set in motion. Sick of being overlooked and unappreciated in her job, not to mention her increasing desperation to catch the eye of the scene-stealing Dylan O’Brien’s bleach blonde, tattooed, and constantly vaping influencer Colin, Danni decides to Photoshop her way to success by claiming she’s jetting off to Paris for a writer’s retreat in order to boost both her visibility and follower count.

So far, so harmless, but after waking up to discover a string of terrorist attacks have caused damage and devastation across the French capital, Danni doubles down on her deceit. That’s right; our protagonist continues to lie about her overseas trip, even hiding behind a pillar in the airport so that she can be photographed returning to home soil, before she ends up building an entire online persona (complete with personal and professional advancement) around falsely claiming she survived a bombing that claimed lives.

It’s a ballsy pitch for a comedy to say the least, and one that could have very easily gone horribly wrong and strayed into outright offensive territory, especially when Danni begins attending support groups and rallies, befriending Mia Isaac’s school shooting survivor and gun violence campaigner Rowan along the way. However, Shephard’s smart writing and effective storytelling ensure the easy and obvious pitfalls are never fallen into, while Deutch delivers in a big way with a phenomenal lead performance.

Influencer culture is viewed by many as the downfall of modern civilization, with the desire to secure likes and build an internet brand one of the dominating forces of modern online life. Not Okay might aim for a target that’s too big to miss, but the film’s success comes from the way in which Shephard’s screenplay and Deutch’s three-dimensional turn approach it from unexpected angles, ones that are almost guaranteed to touch a nerve or two.

While the third act does lean into more tropes than the first two combined, there’s always a reason behind it, as opposed to embracing formula just for the sake of it. Unlike most female leads in the genre, Danni ends the movie in a much worse place than where she started, and while the requisite character-building and growth happens along the way, you’re never allowed to forget that her entire facade has been built upon the most grievous and shocking of lies.

There’s even a brief romance angle thrown in for good measure as she finally gets invited to an exclusive party at Colin’s behest, but even that doesn’t play out the way you expect it to. That’s the crux of Not Okay in a nutshell; the central premise is designed for shock and awe, but the reverberations that happen as a result are delivered with layers of realism, genuine heart, tangible emotion, and potentially even tear-jerking pathos, all while Danni circles around the tried and trusted beats of what audiences have been conditioned to expect from small comedies made without much of a budget, only to pivot away from them at the last second.

In essence, Danni more than lives up to her billing as an unlikable protagonist, and her infatuation with Colin makes sense because he’s arguably even worse pre-scandal, not to mention just as much of a fraud (albeit on a lesser level) after he briefly drops his own carefully-curated personality to chastise Nadia Alexander’s deadpan Harper, who reminds the street-talking pothead that he’s from Maine. Stories about terrible people doing even worse things are difficult to get right, but Shephard and Deutch prove to be an ideal pairing, with O’Brien providing a fantastic comedic foil.

Not Okay might only be Shephard’s second feature-length effort from behind the camera, but her taboo-driven teen psychological drama Blame also subverted a well-worn set of archetypes, winning plenty of acclaim in the process. Given that the filmmaker and actress is still only 27 years of age, her latest only serves to underline the notion that we’re looking at a genuine cinematic prodigy.

Of course, Deutch deserves just as much credit for diving headfirst into being an irredeemable asshole for the majority of the running time, and even when she tries to make amends, nobody’s willing to listen. Death threats, doxxing, parodies, and more turn her life after the fact into a living nightmare that was entirely avoidable before she intentionally lit the fuse that blew up her existence in more ways than one.

That being said, the key to making it all work is that Not Okay goes out of its way to ask the question of how much sympathy you should really feel for someone who was the architect, perpetrator, and ultimately destroyer of the idyllic life they’d always wanted, and answers its own query in resoundingly brilliant fashion. In case you were wondering, it’s a “no”.

It might be a cliche, but in Danni’s case you really should be careful what you wish for, with Hulu’s latest original driving a razor-sharp, jet-black, and near-the-knuckle stake right through the heart of the notion that placing any sort of measurable value on what online strangers perceive of you is either a worthwhile goal to aim for, or a way to try and live one’s life.

Review: 'Not Okay' drives a razor-sharp stake through the heart of influencer culture

Writer and director Quinn Shephard's 'Not Okay' takes thing near to the knuckle, but the biting jet-black comedy never loses sight of its intentions, deftly balancing humor and bile with heart and hard-hitting themes.