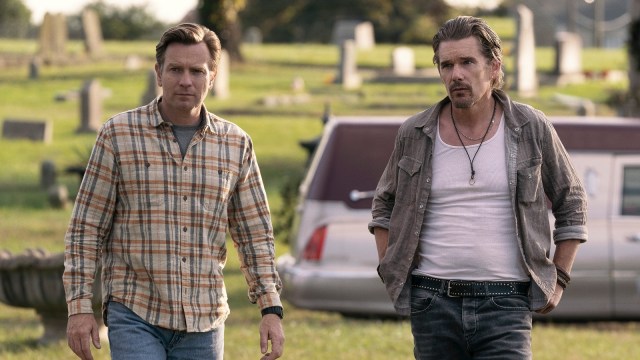 Image via Apple
Review of: Review: 'Raymond and Ray' mixes gallows humor with graveside gravitas to create something unique

Ethan Hawke and Ewan McGregor demonstrate a real chemistry on screen as half-brothers who literally bond over their father's grave. Darkly comic, delicately tragic, and shot through with genuine pathos - 'Raymond and Ray' is a real treat.

Families are funny things – a fact that really hits home in Apple’s latest feature film as the half-brothers and title characters of Raymond and Ray bond over a hole in the ground.

From that first formative connection, through to those awkward adult interactions, each and every family is unique. These are people we love and support irrespective of outside influences or personal prejudice. It is not only a lifelong commitment which can influence bigger decisions, but frequently represents an unconscious obligation compelled by an emotional need.

That is the space writer director Rodrigo García inhabits with his latest film. A story of two men coming together on the occasion of their father’s funeral to not only to reconnect emotionally, but potentially experience some personal epiphanies as they both begin processing decades of emotional baggage, something which proves both absorbing and engaging in the hands of Ewan McGregor and Ethan Hawke.

As Raymond and Ray respectively, both actors share car journeys, funeral homes and digging duties as their father Harris (Tom Bower) gets the last laugh. Over the course of its conservative running time, the duo depict conflicting personalities brought together by obligation, who bond over hatred for an absentee father – a man who perpetually womanized his way through life, belittled his offspring, and lived life according to rules which excluded parental responsibilities.

Whether trading embittered memories on the car journey over, or taking things up a notch around his graveside, McGregor and Hawke are never less than magnetic onscreen as they share awkward moments in an effort to reconnect, while revelations both pleasant and otherwise come out of the woodwork.

Raymond and Ray is a film of quiet moments, internalized emotion and pent-up fury, where the central conceit is both bleakly comedic and strangely cathartic. Thankfully, by imbuing this two-hander with equally beefy dramatic arcs, García provides more than enough substance for both actors to tackle.

Hawke’s Ray is a recovering heroin addict, bohemian jazz musician, and emotionally detached Lothario. Women have never been a promise for him, yet he has rarely allowed anyone close enough for fear of rejection. These may be tried and tested notes in the scale of dramatic stereotype, but the star brings a freshness to the conflicted character that resonates throughout.

McGregor’s Raymond, on the other hand, is the epitome of risk averse after failing to find comfort within the confines of numerous marriages. Devoid of charisma and obsessed with precision, he keeps his emotions under lock and key for the sake of others. Consistently belittled by their father at an early age, his resentment may seem more superficial, but runs just as deep.

Raymond and Ray digs down into the complexities of family relationships, drawing out universal truths amongst its more comedic elements. Rife with sardonic asides and pitch-black humor, García also manages to deliver a lightness of touch that segues into pathos later on.

Of the supporting players, only Maribel Verdú really stands out, playing their father’s final physical conquest Lucia; his full-time caregiver, part-time lover, and only emotional link for either brother back to a father they barely knew. In the main, her contributions are low-key, offering both an insight into the recently deceased, and a companion to aid the grieving process.

Raymond and Ray also has a talent for illustrating the more farcical factors which make up the average family. These include the appearance of long-lost relatives, reactions to the last will and testament, as well as that inevitable reflection on mortality. That the film still finds comedy in the futility of faith when faced with the finality of death, is one way in which it remains optimistic.

As the film moves from funeral home to family home via a graveside, audiences will be swept along by a pair of understated performances from these vaguely related siblings. Two men who find time for each other amongst the maelstrom of mixed emotions, which ultimately defines their father’s final moment of emotional blackmail.

Once the recriminations have been tempered, and those final acts of rebellion exacted by his sons, both men experience their own unique epiphanies. As slates are collectively wiped clean and opportunities to start over present themselves, audiences will find themselves embracing their sense of optimism, ensuring that Raymond and Ray remains uplifting in its final minutes.

Ethan Hawke and Ewan McGregor demonstrate a real chemistry on screen as half-brothers who literally bond over their father's grave. Darkly comic, delicately tragic, and shot through with genuine pathos - 'Raymond and Ray' is a real treat.