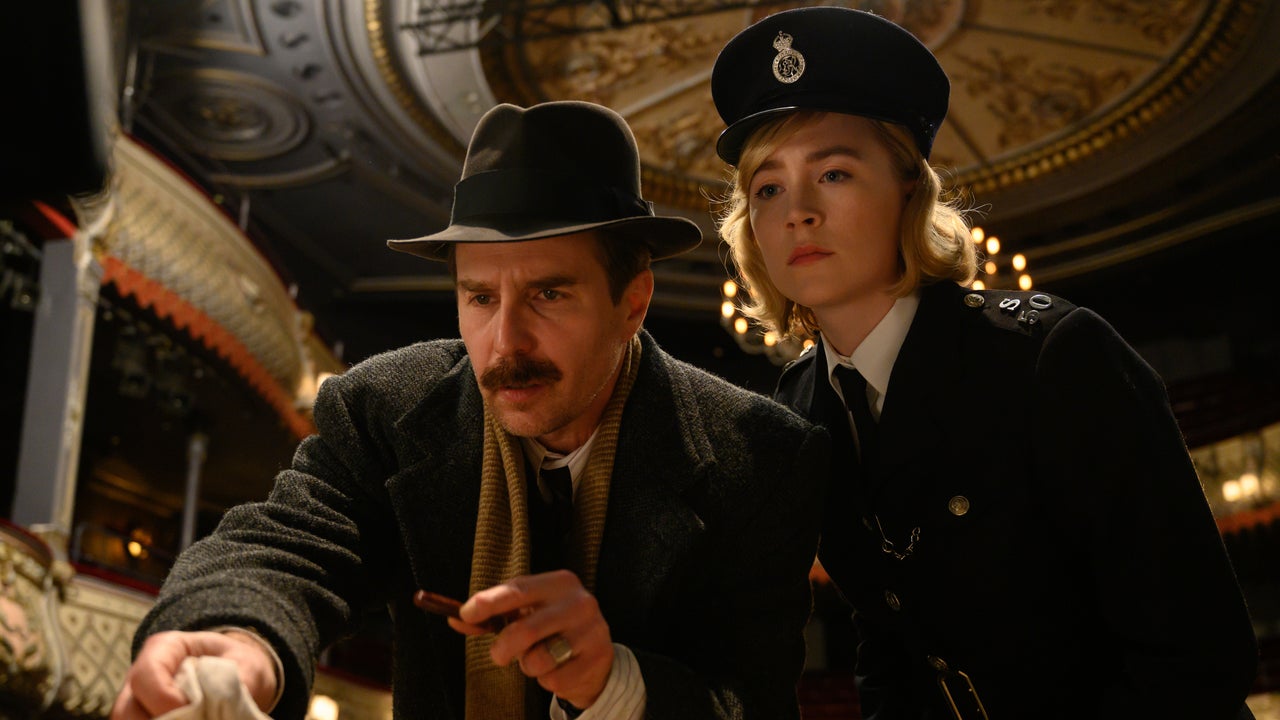 via Searchlight Pictures
Review of: Review: 'See How They Run' brings modern sensibilities to an old-fashioned whodunnit

'See How They Run' delights in combining modern sensibilities with an old-fashioned whodunnit, helped by a stellar cast on top form that elevate a story that regularly threatens to become too unwieldy.

The elevator pitch for director Tom George’s feature-length directorial debut See How They Run places it somewhere between Rian Johnson’s Knives Out and Kenneth Branagh’s recent duo of Murder on the Orient Express and Death on the Nile. It’s a mystery wrapped in an enigma coated in the tropes and trappings of the whodunnit, with a heavy Agatha Christie influence from the first minute to last.

However, the unusual dichotomy of infusing a classic genre with modern sensibilities works wonders, thanks largely to a tightly-wound script from Mark Chappell, another excellent score from composer Daniel Pemberton, and stellar work from a star-studded cast of acclaimed thespians and character actors, many of whom haven’t been renowned for their comedy chops until now.

One of Hollywood’s new favorite trends is to make movies about movies, but See How They Run stretches that conceit to breaking point by outlining in the opening act that it’s not just a movie about a play that somebody wants to turn into a movie, but there are also elements of police procedural, odd couple comedy, slow-burning potboiler, and heightened historical drama in play all at once.

It’s a tough balancing act to pull off, but by planting its tongue ever so firmly in cheek and embracing a sly self-awareness that never comes close to patting itself on the back or winking at the audience, George’s first flick balances a number of spinning plates and moving parts, but very few of them end up getting dropped or grinding to a halt thanks to a narrative that never once slows down to catch its breath across 98 brief-but-pulsating minutes.

With four Academy Award nominations to her name, everyone knows Ronan is one of her generation’s finest talents, and it’s mind-blowing that the actress is still only 28. With that in mind, it shouldn’t be a surprise to discover that she walks away as the MVP of See How They Run, proving that there’s nothing she can’t do by delivering an exuberant, energetic, star-struck and all-too-literal turn.

The chemistry between her and Rockwell will leave you clamoring for sequels by the time See How They Run draws to a close, but there’s admittedly an awful lot of plot to get through before that point. As the brash Yank descending on London’s West End bustling stage scene to try and bring The Mousetrap to Hollywood, Köpernick made a lot of enemies very quickly, and one of them decided his time was up.

One of the major appeals of the whodunnit comes from participation, with the viewer aiming to determine who the culprit is via the various narrative breadcrumbs being dropped. Leaning even further into postmodern self-referencing, See How They Run knows that you know how this all works, but the sleight-of-hand and red herrings are all presented with such affection that it never becomes to overpowering or off-putting.

See How They Run isn’t 100 percent successful in everything that it tries to accomplish, but the positives comfortably outweigh the negatives. It would have been incredibly easy for the unwieldy and ambitious nature of the material to run away from a filmmaker far more experienced than George, and it’s to his immense credit that he manages to wrangle it all together into a largely cohesive, satisfying whole.

Ironically, the actual reveal of the prime suspect doesn’t land quite as it should, although it remains up for debate as to whether or not that was accidental or by design. Having spent over an hour and a half laughing in the face of convention while simultaneously embracing it, See How They Run‘s supposedly game-changing reveal doesn’t land with the heft that it should. It’s a minor quibble, but falling somewhat flat on the biggest plot point of the entire story is something a lot of longtime supporters of the artform may find disappointing.

If you’re not a big fan of whodunnits, potboilers, or period pieces, then See How They Run isn’t exactly going to convert you. However, if you get on the same wavelength as a deliberately oxymoronic slice of escapism that melds the modern with the classic, the self-aware with the archetypal, and the subtle with the overindulgent, then there’s a distinct possibility you’ll end up with a smile plastered across your face when the lights come up.

Review: 'See How They Run' brings modern sensibilities to an old-fashioned whodunnit

'See How They Run' delights in combining modern sensibilities with an old-fashioned whodunnit, helped by a stellar cast on top form that elevate a story that regularly threatens to become too unwieldy.