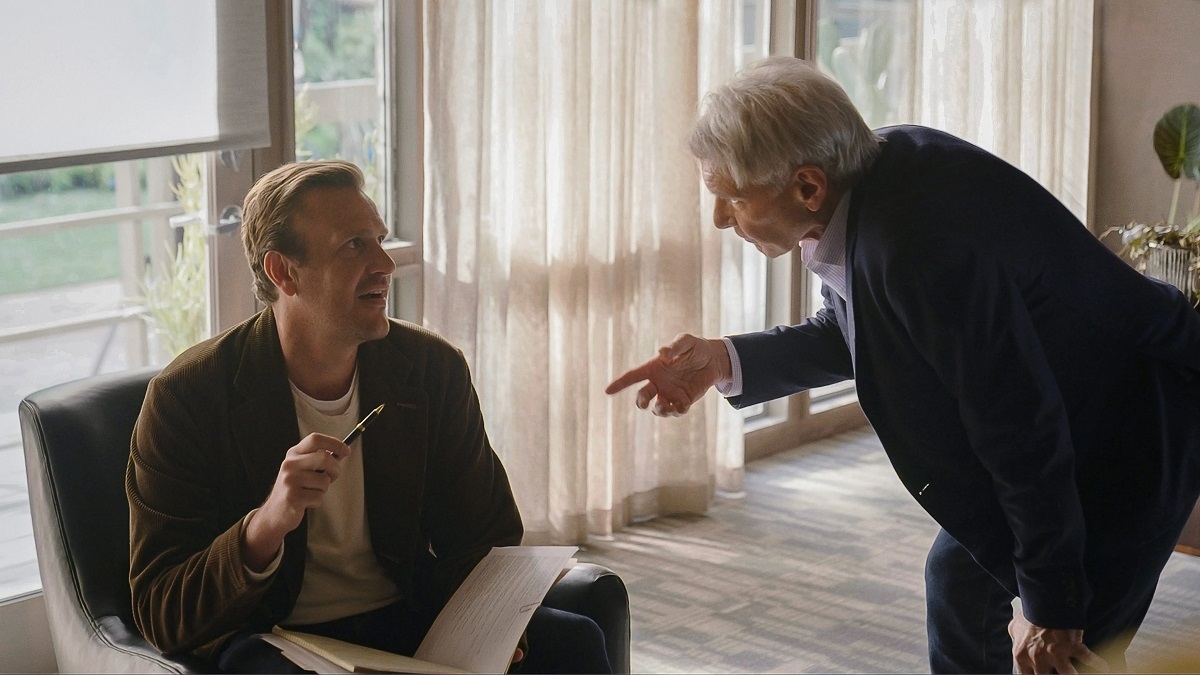 Harrison Ford seems to be experiencing a career renaissance, with the imminent Indiana Jones and the Dial of Destiny, Yellowstone prequel 1923, and now Shrinking – which hits Apple TV Jan. 27. That this surge in productivity coincides with the return of Scrubs legend Bill Lawrence to writing, should perhaps come as less of a surprise.

Co-created by Brett Goldstein (Ted Lasso), Jason Segel (The End of the Tour), and sitcom supremo Lawrence – Shrinking is engaging from the outset, laying down a template which centers around Segel’s Jimmy, a psychiatrist who is introduced over the fence playing air piano to Billy Joel, while two bikini-clad women cavort in his pool. Certain audiences will be on his side from minute one.

Deep in the grieving process after losing his wife Tia (Lilian Bowden) to a car accident, Jimmy has let himself go, and barely pays attention to his therapy clients as they unload their troubles. His next door neighbors Liz (Christa Miller) and Derek (Ted McGinley) take more interest in his teenage daughter, Alice (Lukita Maxwell), than Jimmy ever does – while colleagues Paul (Harrison Ford) and Gabby (Jessica Williams) are professionally considerate. From that description, Shrinking might not sound like a laugh riot, but rest assured, this is solid gold sitcom territory worthy (and reminiscent) of Scrubs in its early seasons.

There is such a situational zing to this Apple original series that audiences will be hooked after the first 40 minutes; each episode links seamlessly to the next, while characters drip-fed into Jimmy’s world expand it effortlessly, each adding something fresh to a mix packed with potential.

What liberates this series more than anything else is Ford doing comedy — or more importantly, responding to a really good script. Leaning into his naturally laconic intonations, this movie star lets the words do all the work, while he sparks easily off his co-stars without upsetting the dramatic apple cart.

Throughout those early episodes — which see Jimmy throw out the counseling-methodology rulebook to adopt honesty with patients — Segel manages to remain affable and tap into his inner everyman. There is a mild smattering of four-letter words which slot right into dialogue exchanges, adding emphasis but imbuing pathos simultaneously. Subtle references to Paul’s Parkinson’s are mentioned but never belittle him, while Jimmy undergoes a series of epiphanies, changing his character experience.

In the first hour and 10 minutes, Lawrence and company lay down foundations solid enough to suggest serious series longevity. From the introduction of ex-military client Sean (Luke Tennie), whose anger management issues need addressing, through to Liz, who finds it hard to step away from Alice once Jimmy starts getting his act together – Shrinking proves to be an intricate piece of writing.

This series also lifts liberally from Lawrence’s greatest sitcom success by infusing key scenes with appropriate musical segues. Snippets of abstract song effortlessly underpin the mood of a given moment, a tactic many programs attempt, but rarely achieve so completely. Even the understated theme song, catchy yet un-intrusive, every element of this series has been fine tuned for audiences.

Standouts in this show are also impossible to pin down, since everyone here gets to bounce off each other verbally, adding depth to their character and broadening narrative possibilities. Everything is thematically interconnected, which not only means the laughs hit harder, but also that these are offset by some genuine heartbeat, as carefully-considered flashbacks provide context.

However, beyond the verbal sparring and slices of perfect casting, which audiences will immediately appreciate – Shrinking also strives to say something important. Loss is the greatest universal truth to unite everyone, irrespective of geographical location. Friends and family are lost every day and there are always those left behind. More than anything, Shrinking seeks to discuss the taboo topic by allowing audiences opportunities to laugh at the inherently unpleasant – which it achieves with flying colors.

With no sense of exaggeration intended, this show consistently hits it out of park, offering up characters who admit their flaws, embrace their foibles, and ultimately improve as a result. This might all sound a little bit safe for some, but have faith, because very soon Shrinking will be picking up Emmy awards – remember where you heard it first.

Review: 'Shrinking' is packed with pathos and laugh out loud funny

Bill Lawrence and Brett Goldstein have created something genuinely touching in their new Apple original show. ‘Shrinking’ brings together Jason Segel and Harrison Ford, in a psychological comedy with pathos by the pound. Emmy awards are imminent.