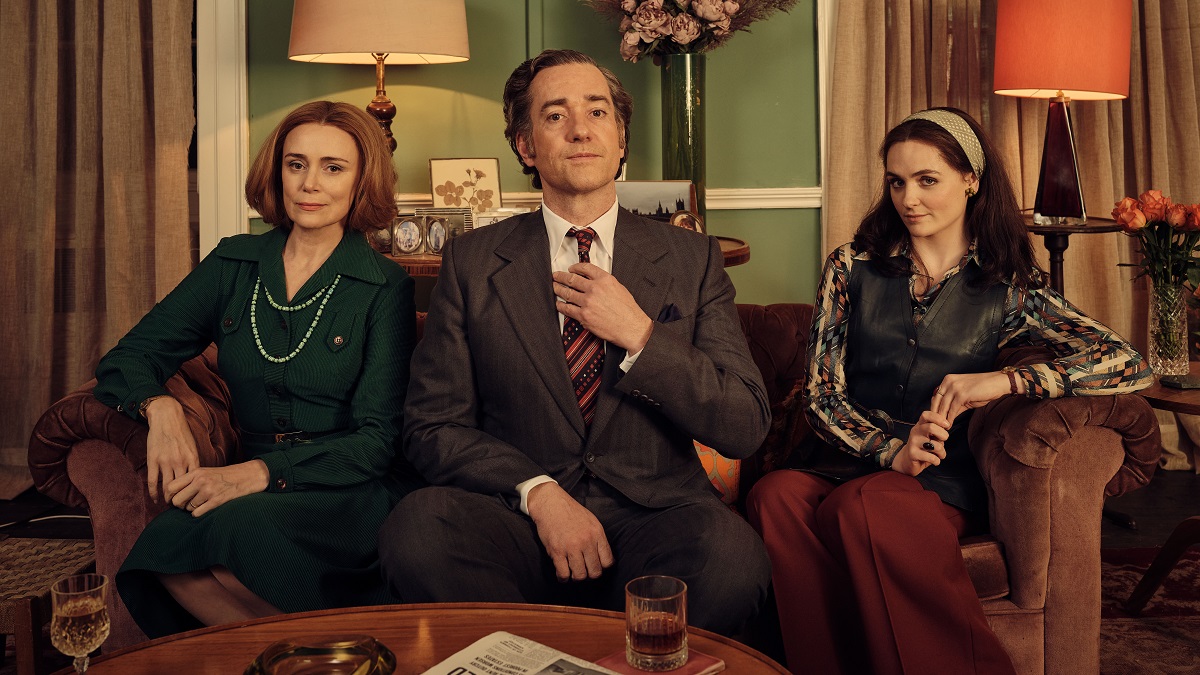 On November 20 1974, English parliamentary MP John Stonehouse (Matthew Macfadyen) walked into the ocean off Miami. A confirmed philanderer, family man, and suspected spy for the Czech Republic, this morally bankrupt member of parliament was already in hot water before he decided to do it.

What dramatization Stonehouse decides to do is shape this political scandal around two central relationships. One between Prime Minister Harold Wilson (Kevin McNally) and Betty Boothroyd (Dorothy Atkinson), while the other plays out between Barbara Stonehouse (Keeley Hawes), her husband John, and his mistress Shelia Buckley (Emer Heatley). All that scandal, espionage, and adulterous behavior only adds spice to an already intriguing piece of television.

Directed by Jon S. Baird (Filth), this three-part series has more than a touch of farce about it, aided in no small measure by an excellent performance from Mcfadyen (Succession) – which sees him retain a surprising degree of humanity despite his despicable deeds.

Entrenched within the old boy’s network which defined British politics at the time, his good looks and old school connections soon saw Stonehouse promoted to high office. Elevated within Wilson’s cabinet, he frequently flew off to Eastern Europe on matters of political importance, which quickly found him morally compromised, blackmailed, and recruited into the Czechoslovakian secret service.

With a tight script written by John Preston, Stonehouse never makes light of the underhanded politician, but instead paints him as some sort of inept opportunist; a man who lacked emotional scruples, yet felt entitled to professional success despite his poor judgement. For that reason, Macfadyen deserves all the plaudits going for making this calculating adulterer anywhere close to compassionate in the eyes of an audience.

As the series plays out, and Stonehouse is discovered in Australia six months after his apparent suicide, this true-life drama takes another turn, one which sees events become increasingly ridiculous as Wilson’s government clings to power with a majority of one. That this seat is held by the recently deceased and resurrected Stonehouse is the epitome of ironic.

However, what Stonehouse avoids with ease is any drop in momentum, even though the subject matter itself might be considered dry by some. As Barbara, Keeley Hawes is more than a match for her husband onscreen, subtly keeping him in check whilst allowing his numerous indiscretions to tot up. In her scenes opposite Heatley, there is an undeniable frostiness, which although quite serious, strays into comedy at times when her husband shares screen time with them both.

Other revelations which make this Britbox original a real treat, come in the tag team double act of McNally and Atkinson. As Wilson and Boothroyd respectively, not only does the former nail those distinctive intonations which shaped Wilson’s public persona, but his co-star adds real depth to Boothroyd – who would also end up doing great things.

What Stonehouse also manages to do, all be it inadvertently, is shine a light on the current state of contemporary politics. By depicting a 1970s government who are little more than a disorganized group of people defined by self-interest, this series also ends up tapping into contemporary issues.

By attempting to maintain power through the exploitation of a deceased parliamentary member, audiences will find comparisons unavoidable, as those currently in office have consistently made excuses whilst lining their own pockets. A fact which only makes Stonehouse the man more compelling, as he extols the virtues of honesty and truth in a speech which would ultimately convince Harold Wilson to resign in real life.

In terms of a moral fable, Stonehouse really delivers a drama of depth, centered around someone with genuine failings, who eventually pays the price. It may lean towards tragi-comedy to a degree, but in the end, there is a sense of redemption which audiences will appreciate. It proves that in politics, unlike in most professions, there is life after death.

With an infinite amount of choice available to discerning subscribers, competition is understandably fierce, which is why Britbox seems to have thrown down the gauntlet with Stonehouse, a move which will garner the attention of an international audience quickly, by offering up a savvy 70s drama with lashings of intrigue.

Slick, savvy and fronted by a charismatic Matthew Macfadyen, 'Stonehouse' is an engaging piece of political drama. Charting the rise and fall of politician John Stonehouse, it is a tightly-scripted series worth every minute of your attention.