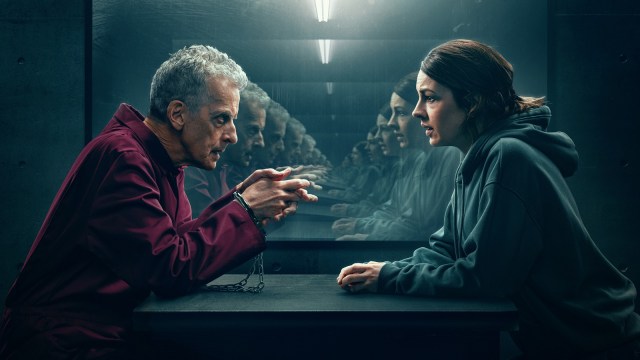 via Prime Video
Review of: Review: 'The Devil's Hour' has the makings of an unsettlingly addictive slow-burning creepshow

It's hard to get a real grasp on where 'The Devil's Hour' is heading, but the first two episodes offer enough to ensure that fans of psychological thrillers and horror will be eager to see where it goes.

Trying to get a handle on a slow-burning mystery without discovering how it ends is a tough task, but there’s more than enough eerie atmosphere, impeccable acting, and nerve-shredding tension on display throughout the first two episodes of The Devil’s Hour to recommend that those with a penchant for thrillers that nudge themselves into horror territory stick around to see how the story resolves itself when all six drop on Prime Video tomorrow.

Created by Tom Moran, the opening two hours do an effective job in setting the stage for what may or may not be to come, creating a genuinely intriguing central conceit that doesn’t come anywhere close to playing its hand early, but doesn’t resort to desperate bait-and-switch tactics or countless red herrings designed to throw audiences off the real scent, either.

Jessica Raine is phenomenal as Lucy Chambers, a single mother dealing with far too much personal strife for one person. She jolts awake at 3.33am every morning after suffering from haunting visions that could very well be premonitions of horrific events to come. She’s technically single, but still sleeping with her ex. Her mother is in failing health, and her son is perhaps one of the creepiest kids the psychological thriller/horror format has thrown up in quite some time, which is really saying something.

Benjamin Chivers’ Isaac is cold, emotionless, withdrawn, and convinced he can see things that aren’t there. Or are they? Frayed to her wit’s end, matters that aren’t helped by a stressful day job as a social worker, Lucy’s life takes a turn into even worse territory when her story dovetails with that of a murder investigation that’s left two bodies behind already, with the police tasked to investigate the killings continuously running up blind alleys.

Nikesh Patel’s Ravi is the rapidly-rising law enforcement wunderkind on the case, and he’s aided by a grizzled, world-weary veteran partner (Alex Ferns on wryly sardonic form, continuing his banner year following The Batman and Andor). There are hallucinations, flashbacks, fragments of other lives, flashforwards, and tense exchanges taking place between Lucy and Peter Capaldi’s Gideon that unfold during an unspecified point in the very near future, but The Devil’s Hour only drip-feeds information as opposed to going all-in.

That’s no doubt set to change across the remaining four episodes, but the driving force of the premise nonetheless manages to get its hooks in early. The best examples of this very particular format find at-home viewers asking questions out loud and trying to piece together the various scattered shards of the puzzle themselves, and that’s something you’ll definitely find yourself doing to borderline frustrating levels in the first two hours.

Capaldi brings a delicious menace to a turn that’s oxymoronically understated-yet-showy. You can see that he’s holding back from devouring every piece of scenery in sight (something that feels as though it’s coming further down the line), but the former Doctor Who still brings a foreboding darkness and malicious intent to a character who appears to be the main antagonist, one that exists in the rarefied space between a heightened and exaggerated Hollywood monster and a strikingly convincing figure who could easily exist in the real world.

Almost everything about The Devil’s Hour is a cliche in one form or another, though, but it’s a testament to Moran’s layered writing and the excellent work by the cast across the board that flirting with self-awareness or unintentional parody is never a genuine concern. Don’t get us wrong; you’ve seen every single one of these elements at least a handful of times before, often arranged in roughly the same fashion, but it’s the subtleties and nuances coming from either side of the camera that seize your attention.

It could be a straightforward serial killer thriller, or perhaps there’s a demonic or even satanic element at play. For all we know, the final four installments could even delve headlong into full-blown supernatural territory. That’s both the best and worst thing about the first third of The Devil’s Hour; it never makes it quite clear what sandbox it’s ultimately going to end up playing in, which by extension means that a lot of people may be disappointed with what they end up getting.

That’s a minor quibble for a nail-biting slice of glossy streaming content that’s sure to prove popular among the mountainous volume of Prime Video subscribers going out of their way to barrel through as much horror-adjacent content as humanly possible in the run-up to Halloween, but there’s a strong case to be made that a couple more answers would have immensely benefited the opening stretch of The Devil’s Hour, if only to save the almost inevitable underwhelming reactions to come when the real thrust of the story reveals itself.

Review: 'The Devil's Hour' has the makings of an unsettlingly addictive slow-burning creepshow

It's hard to get a real grasp on where 'The Devil's Hour' is heading, but the first two episodes offer enough to ensure that fans of psychological thrillers and horror will be eager to see where it goes.