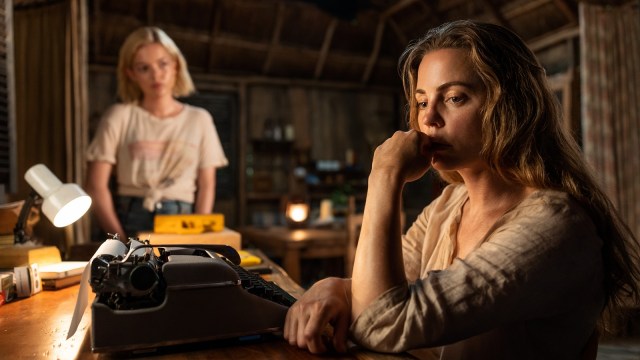 Image via Apple
Review of: Review: 'The Mosquito Coast' season 2 fails to fulfill the potential of its predecessor

Despite a solid opening episode and strong performances from Justin Theroux and Melissa George, 'The Mosquito Coast' season 2 fails to live up to its predecessor, with some pedestrian pacing hampering a show which showed tremendous promise.

Sometimes the desire to forego civilized society, drop off social media, and shirk responsibilities occur to everyone. Just disappear from view, wipe the slate clean and explore new opportunities without repercussions. At the heart of The Mosquito Coast, a novel written by Paul Theroux in 1981, those ideas and more besides were explored.

In 1986, under the guidance of director Peter Weir (Dead Poets Society), a film adaptation was made with Harrison Ford, Helen Mirren, and the late River Phoenix. It followed Ford’s inventor and pioneer Allie Fox, as he took his family away from the temptations of a consumer society to rebuild their lives in an isolated jungle paradise, forcing them to confront some home truths about themselves in the process.

When Neil Cross (Luther) adapted it afresh alongside Tom Bissell for Apple in 2021, Justin Theroux (nephew of author Paul) was cast as Fox, while Melissa George (The Eddy) took up the mantle of his wife Margot. This time, the need to escape was no longer driven by consumer overkill, but rather by acts of an unknown nature committed by Fox against the US government.

Layered, slick, and character-driven from the outset, The Mosquito Coast proved an intriguing proposition, earning itself a season 2 renewal. With Allie having hot-footed it down to Mexico with son Charlie (Gabriel Bateman) and daughter Dina (Logan Polish), as well as Margot, this particular roll of the adaptation dice hit home.

Following on from a fraught first season finale, the sophomore run opens with the Fox family safely living on their trawler somewhere in Guatemala. World-weary, weather-beaten but far from defeated – our plucky fugitives soldier on into uncharted waters. Heading down river to rendezvous with an old family friend who has promised Allie a safe haven.

What follows in the opening episode amounts to an hour of backstory, introducing audiences to Allie and Margot with different agendas. Both Charlie and Dina are children, while their parents share custody as a matter of course. This first 40 or so minutes of screen time depicts a Margot who still lectures passionately about literature, while sharing time with past life love interest Richard (Ariyon Bakare).

Meanwhile, Allie is caught in a moral quandary as his research into seasonal migration is trying to be commandeered by government agencies, who see the predictive application of his work as something which could be redeployed for covert purposes. In many ways, this first episode contains the most drama The Mosquito Coast can muster and remain interesting.

Both two and three lack the character conflict of the intriguing opener, which fills in a lot of blanks left over from season one. Theroux and George continue to build nuance into their characterizations throughout that opening hour, displaying an ethical flexibility which was only ever hinted at first time round. However, beyond that, things drift into stasis following what many would consider a promising start.

Episode two pulls audiences back to that trawler heading into rough weather, as Allie and his family battle the elements in a pint-sized Perfect Storm scenario. Unfortunately, despite some solid character beats and an opportunity for Margot and Charlie to bond, this ultimately feels like filler – as the patriarch is no longer capable of providing all the solutions. Dina may get to prove herself with an ingenious moment of inspired practicality, but the narrative digression which represents Margot and Charlie’s jungle trek feels superfluous.

As our family near their utopia, and all there is to do is admire that stunning scenery, it may occur to some people that season two has lost its mojo. There is something missing from the second outing that got lost in translation along the way. Meaning that when the Fox family apparently reach salvation and meet up with Isela (Natalia Cordova Buckley), interest in their internal struggles and external squabbling may no longer matter.

By that point the appearance of William Lee (Ian Hart), introduced in a cold-blooded fashion, does little to restore the momentum so sorely lost in those intervening episodes. Whether audiences stick it out and push through to the halfway point then comes down to what else is on offer. Unfortunately, despite the hint of some solid work from all concerned in those first three episodes, The Mosquito Coast‘s return may not prove enticing enough to warrant a long-term investment.

Review: 'The Mosquito Coast' season 2 fails to fulfill the potential of its predecessor

Despite a solid opening episode and strong performances from Justin Theroux and Melissa George, 'The Mosquito Coast' season 2 fails to live up to its predecessor, with some pedestrian pacing hampering a show which showed tremendous promise.