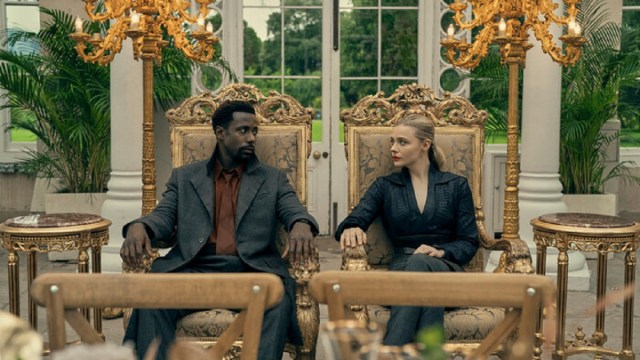 Review of: Review: 'The Peripheral' starts strong, but soon slows itself to an agonizingly self-serious crawl

Fans of hard sci-fi are poised to get a great deal more out of 'The Peripheral' than casual audiences, with the ambitious time-jumping series starting on the right foot with a strong pilot before cutting itself off at the knees thanks to agonizingly slow pacing.

It’s easy to see why the marketing campaign behind Prime Video’s new series The Peripheral has sought to mark it out as the streaming service’s version of HBO hit Westworld. Even if we ignore the presence of shared executive producers Jonathan Nolan and Lisa Joy, the promise of mind-bending visuals, sleek production design, and a futuristic sci-fi mystery flitting between multiple timelines paints the picture of something intentionally designed to be viewed as a companion piece of sorts.

Unfortunately, the similarities begin and end at surface level. Whereas Westworld‘s first season is arguably one of the finest and most addictive opening runs of television to come along in the last decade, The Peripheral starts strong with an instantly-engaging pilot – but soon slows the pace to an agonizing crawl from then on out. The blockbuster offering premieres on Prime Video tomorrow, and this review will encompass six of the eight installments coming between then and December 9, but it’s debatable as to whether or not everyone who checks out the first couple will stick around until the end.

Based on the novel of the same name by genre favorite William Gibson, Chloë Grace Moretz headlines the cast as Flynne Fisher, who lives in a small Appalachian town circa 2032 with her brother Burton (Jack Reynor), and ill mother. With the latter’s medical bills mounting up, the two siblings earn extra cash on the side by playing immersive video games known as Sims. However, when a new model makes its way to the Fisher residence, the pair become embroiled in a very real conspiracy that takes place in 2099.

Gary Carr’s Wilf is the prime exposition machine in the first stretch of episodes, explaining that Flynne and Burton’s journey into what they assumed was a game ended up putting a target on their backs, with the nefarious Research Institute seeking to recover information heisted within that has the potential to drastically alter the present and future of everyone involved, with the “Peripheral” of the title referring to a person’s consciousness being transferred into a body engineered and operated in a different place or time.

There’s an awful lot of world-building and leaps of faith to be taken in the opening chapter, but there’s enough intrigue to genuinely maintain interest. From there, though, each new episode runs for roughly an hour (if not more) when it really doesn’t need to, and the drastic slowing of the pace in favor of indulgently long scenes, overwrought dialogue, and a portentous sense of self-seriousness begin to reach levels that could almost be described as excruciating.

The Peripheral is beautiful to look at, make no mistake, with regularly stunning visuals and jarring bursts of action-packed intensity regularly shaking the narrative from its stupor, but they’re too few and far between. Showrunner Scott Smith is evidently luxuriating in the ability to craft a layered, complex, and incredibly ambitious dystopian time-jumping saga with the backing of a major studio budget, but a significantly tighter edit and less of the borderline pretentiousness would have worked wonders for the series as a whole.

The cast acquit themselves across the board, with Moretz offering another reminder of her immense talent by tackling a role that allows her to tick off a multitude of genre-adjacent boxes, often in the same episode. Flynne might be a cipher and an archetype more than a fleshed-out and three-dimensional protagonist, but the lead’s performance is strong enough to overcome any flaws in her characterization.

Similarly, Reynor’s Burton is a handsome ex-Marine with a twinkle in his eye, but the actor brings depth and complexity to fill in what could have been a cacophony of blanks wrapped up in the square-jawed clothes of an off-center action hero. He’s the protective older brother that’s handy with a gun, and as conveniently fortuitous as that proves to be throughout the first six hours of The Peripheral, the biggest assist comes from the fact Reynor matches Moretz in the performative stakes, too.

Carr’s Wilf is a bit of a blank slate with the standard “tragic backstory embedded deeply in the central mystery” that’s hopefully wooden by design and not as a result of a relentlessly subdued approach to the part, but a colorful cast of supporting players including The Haunting of Bly Manor breakout T’Nia Miller as the nefarious Cherise, One Night in Miami‘s Eli Goree as wounded war veteran and longtime Burton buddy Connor, Harry Potter veteran Katie Leung’s Ash, Alexandra Billings’ fascinating Detective Ainsley Lowbeer, Charlotte Riley’s walking MacGuffin Aelita, and many more inject a largely one-note raft of generic cutouts with some semblance of personality that helps them pop off the screen.

Diving too far into the specifics would be forging a path headlong into spoiler territory, but suffice to say, The Peripheral is destined to be one of the fall’s most polarizing shows. There’s a lot to like but not enough of it, and anyone who struggles to get on board with the conceit by the time the credits roll on the pilot is best giving up altogether, because things only get more impenetrable from there.

There’s a big, sweeping mystery at the center of The Peripheral, but it’s one that takes an excessive amount of time to make itself felt, and by then there’s a distinct possibility the less discerning viewer may have checked out completely. Hard sci-fi has always been a tough sell to the casual crowd, and while genre diehards are poised to lose themselves in the world and desperately wait to devour the next episode, we can state with a great amount of confidence that not everyone is going to feel the same way.

Review: 'The Peripheral' starts strong, but soon slows itself to an agonizingly self-serious crawl

Fans of hard sci-fi are poised to get a great deal more out of 'The Peripheral' than casual audiences, with the ambitious time-jumping series starting on the right foot with a strong pilot before cutting itself off at the knees thanks to agonizingly slow pacing.