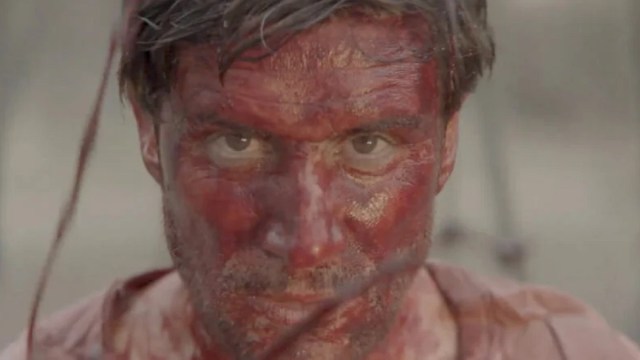 via Better Noise FIlms
Review of: The Retaliators

A blood-soaked tale of morality and vengeance backed by a hard rocking soundtrack, what 'The Retaliators' lacks in depth, it makes up as a grimy horror thriller sure to appease grindhouse fans.

“When do the sins of a good man make him bad?”. This quote opens The Retaliators, and establishes the moral stakes at play in this blood-soaked thriller. While the themes are heavy, the execution is pure exploitation done well, with the end result a hyper-violent take on influential 1970s revenge thriller Death Wish that would have been right at home during the “video nasty” days of the 80s.

Adding more novelty to the proceedings is the film’s heavy metal soundtrack, with bands such as Five Finger Death Punch and Papa Roach not only providing the music, but also starring in pivotal villainous roles, with which their grimy tattooed appearances fit quite nicely. The Retaliators is produced by Better Noise Films, a division of Better Noise Entertainment, the home of many bands that feature on the musical side of the equation.

The Retaliators stars Michael Lombardi as John Bishop, a pastor from a small New Jersey town. When John’s oldest daughter Sarah (Katie Kelly) is murdered by monstrous gang enforcer Ram Kady (Joseph Gatt), John undertakes a harrowing journey through hell when he accepts the opportunity by renegade police detective Jed (Michael Menchaca) to have one minute with his daughter’s killer, within which he can dispense any method of brutal torture his broken heart desires.

Having Lombardi’s lead character be a “man of God” brings with it an inherent set of moral quandaries, with which directors Lombadri, Samuel Gonzalez Jr., and Bridget Smith can play with. The films screenplay, written by Darren and Jeff Allen Geare, was inspired by a violent sexual assault inflicted upon their sister. The constant violent imagery that teeters on the deranged, along with a loud hard rock soundtrack, however, often overpowers any heavy commentary that the film might have hoped to share.

To the film’s credit, the faith of Bishop is portrayed as a virtue, with the good pastor often sticking to his faith driven morals. Yet, when thrown into a literal pit of hell this good shepherd become a savage wolf, with Lombardi rendered a mess of blood splatter in sequences reminiscent of a zombie movie, imaginative kills and all.

A third act that pits the vengeful father against his daughter’s murderer, played by the terrifically menacing Gatt, harks back in the best way to 80s actioners such as Cobra, where justice is dispensed upon the wicked in bloody, brutal fashion. For those with an appetite for such things, The Retaliators is worth feasting on.

A blood-soaked tale of morality and vengeance backed by a hard rocking soundtrack, what 'The Retaliators' lacks in depth, it makes up as a grimy horror thriller sure to appease grindhouse fans.