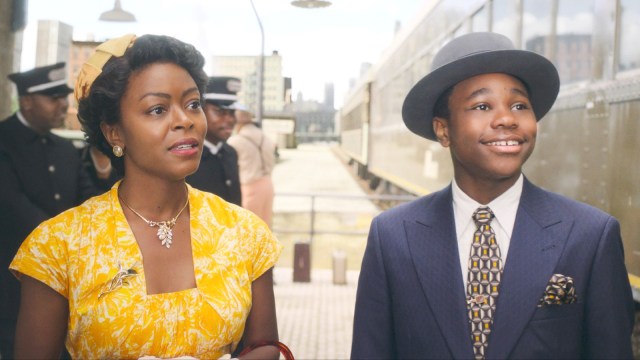 Courtesy of Orion Pictures.
Review of: Till

'Till' is the sobering portrait of how a mother's grief helped ignite the civil rights movement, with Danielle Deadwyler's unforgettable performance as Mamie Till-Mobley serving as the crown jewel of the movie's many narrative accomplishments.

Till is an emotional and moving portrait of Mamie Till-Mobley, played exceptionally well by Danielle Deadwyler, that portrays one of America’s most notorious murders in its history and its aftermath.

The opening scenes of the movie feature a gorgeous splash of color depicting the mid-1950s and almost-idyllic and playful interactions between Mamie and her 14-year-old son Emmett Till, played by Jalyn Hall. Hall is fantastic as Emmett and has an infectious charm that permeates through the screen.

The story centers around Emmett’s trip to Mississippi to visit his cousins from his hometown of Chicago. Throughout these early scenes, Mamie expresses worry since it will be the longest time she will be away from Emmett. And she also warns her son that there are different rules that Black people must follow in Mississippi during that time due to Jim Crow laws being in full effect as well as the state experiencing a spat of high-profile murders — including of Black civil rights activists — immediately prior to Emmett’s visit.

Though Hall’s considerable talent could have easily carried an entire feature-length tale, putting the focus on Mamie’s perspective works on a few different levels narratively. Like Mamie, the audience does not actually see Emmett’s murder in all its graphic detail. Rather, we only know the build-up to and aftermath of discovering the obviously brutal manner in which he died.

What is astounding about Chinonye Chukwu’s direction of Till is that so many different movie genres seem to be expertly woven together into one story. The first act, which portrays Emmett’s abduction and murder, has the feel of a horror movie. And then the film shifts suddenly to a political drama when it comes to Mamie receiving the help of the NAACP’s efforts to signal-boost the story of her then-missing child to the press and later bringing the brutality of Emmett’s murder to light. Till also works in the tradition of movies about the power of journalism bringing attention to systemic injustices, such as Spotlight. Finally, the film culminates in a trial of Emmett’s murder that makes for a terrifically-executed courtroom drama.

As soon as the crushing realization that Emmett has gone missing sinks in, the colorful yellows and golds of the set and costume design, and brightly-lit cinematography, give way to darker blues and blacks to exemplify Mamie’s increasing grief. The use of a dolly zoom focused on Mamie at the moment she hears the news that Emmett’s deceased body has been discovered is incredibly effective, too. The sorrowful and string-heavy music by Abel Korzeniowski throughout the film also perfectly reflects Mamie’s increasing heartbreak as the story unfolds.

The screenplay co-written by Chukwu, Michael Reilly, and Keith Beauchamp does not sugar-coat the story, but faithfully tells it as it is. There’s a scene where Emmett whistles at a woman at a convenience store, the inciting incident that ultimately results in two white men coming and abducting and murdering him. But the white men who carried out the crime also hired Black men to help initially kidnap Emmett, which is also shown in the movie. And the uncle character, John Douglas Thompson’s Moses Wright, later must explain to Mamie in a heartwrenching scene why he did not take the shotgun off his wall to try and keep the group of men from kidnapping Emmett from his home in the first place. Even the grandmother character, Whoopi Goldberg’s Alma Carthan, has an emotional moment in the film when she blames herself for encouraging Emmett to visit Mississippi in the first place (Goldberg is also a producer of the film).

The courtroom scenes that we see later also come across as quite authentic. For instance, at one point, one of the lawyers asks the judge if they can bring on an extra witness, which immediately causes the entire court proceeding to go into recess until the following day. This is the kind of thing that is typically compressed in other courtroom dramas, with the surprise witness simply showing up moments later to keep the story at a brisk pace. In Till, the court proceedings come across as more realistic, and the movie wisely takes this opportunity where the trial is paused to have an emotional scene in which Mamie visits the convenience store that Emmett visited where the inciting incident took place and she imagines her son browsing its aisles.

Of course, Mamie and company are treated horribly at the trial itself, from being called racial epithets by the conspiracy-theory-spewing sheriff to witnessing the frustrating injustice unfolding before her eyes at the hand of the all-white jury and the white woman, Haley Bennett’s Carolyn Bryant, lying about what really happened in her testimony.

So disfigured was Emmett, whose body was discovered in a river and bloated from the water, that the body’s identity was called into question by the murderers’ defense attorney. Thus, Mamie had to give her testimony, traveling all the way from Chicago to Mississippi, to try to convince the jury that she recognized the body as her son’s.

Deadwyler’s performance during the trial, and having to give her testimony while choking back tears, is exceptionally moving. There are many scenes of grief throughout the film involving Mamie fainting or loudly sobbing that Deadwyler handles extremely well. But it is the subtler, quieter moments that truly make her performance the crown jewel of the movie.

In particular, there is a scene in the film where Mamie — still believing Emmett is only missing — plays one of her son’s records and simply sits on the bed in his room with a far-away look in her eyes, repeating the record over and over again, and wondering where her missing child has gone. It is moments like that, where Deadwyler conveys the greatest of emotion in the minimalist of ways, that truly make her turn in this role remarkable.

Though Till is a tragic movie, it is also very inspiring. After all, it was Mamie’s decision to ask her lawyers to send Emmett’s body back to her in Chicago, and later it was also her decision to have an open-casket funeral, allowing the press to photograph her son’s disfigured face from the apparent torture he went through. The images of Emmett’s body would become burned into America’s consciousness and help inspire others to be involved in civil rights, as multiple characters tell Mamie throughout the film. There is also a moving montage that shows a diverse number of households — Black and white, alike — watching the news broadcast updates about Emmett.

Similar to Steven Speilberg’s Lincoln, Till portrays an individual who had to rise to the occasion of history, as if called to it. In the span of a single month, we see Mamie transform from an unknown individual trying to get by in life to becoming a vocal advocate for civil rights and speaking to crowds of thousands, all in the name of trying to bring justice in the wake of her son’s death.

This transformation also makes for a very compelling arc for our main character to go through. An interesting and often overlooked aspect of people’s casual knowledge of Emmett Till’s murder is the conflicts that came with Mamie becoming a public figure overnight. There are scenes where Mamie’s background is scrutinized as if being vetted as a person about to run for office, even as she has hardly had any time to grieve for her child’s loss. The image-management aspect of her life as a public figure was so profound that there is a scene in the film where she has to ask her then-partner, Sean Patrick Thomas’ Gene Mobley, to not go with her to the trial in Mississippi.

Though Emmett’s death and Mamie’s persistence in bringing the story of her son’s murder to light arguably helped kick off the civil rights movement in the U.S., the film instills a call to action in the hearts of the viewers that other political movies too often lack. The movie helps us feel the injustices that persist to this day, rather than presenting any kind of bow on the matters as if they’d long been resolved decades ago.

For instance, the most audible gasp from the audience in the theater came from a title card at the end of the movie reminding viewers that a federal antilynching law — something activist characters in the movie mentioned wanting to get passed — would not be made law until March 2022 with the passage of the Emmett Till Antilynching Act, nearly 70 years after his death.

Till is a moving story of grief that America needs to remember and will likely bring you to tears by the last scene, if not sooner, as it did this reviewer.

'Till' is the sobering portrait of how a mother's grief helped ignite the civil rights movement, with Danielle Deadwyler's unforgettable performance as Mamie Till-Mobley serving as the crown jewel of the movie's many narrative accomplishments.